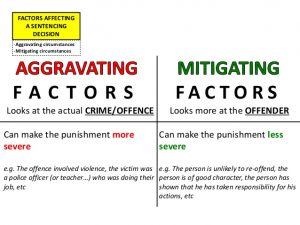 If a judge or jury finds a defendant guilty at the end of a criminal trial, the court must determine the defendant’s punishment. State and federal criminal statutes often set maximum penalties based on the offense classification, with felonies having the most serious possible punishments. Judges have some discretion with regard to sentencing, and a sentencing hearing allows both prosecutors and defendants the chance to present evidence for the court to consider. 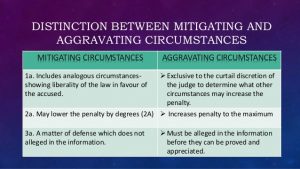 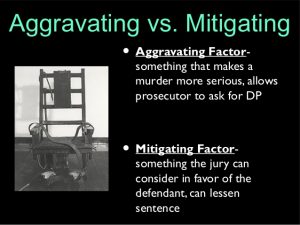 A court may impose a harsher penalty on a defendant with multiple prior convictions. In states that have a “three strikes” law, such as California, a relatively minor offense may result in a lengthy jail or prison term if the defendant has two or more prior convictions.

Vulnerability of Victim: In some jurisdictions, court may impose a harsher sentence if the victim is found to be vulnerable, either according to an objective standard or in relation to the defendant. Vulnerability based on age, such as a crime of violence against a child or a fraudulent scheme targeting the elderly, may be an aggravating factor. Other factors may include physical or mental disability, illness or injury, and incapacitation.

Leadership Role: If the defendant played a prominent role in a criminal scheme, such as a leadership or managerial role, some jurisdictions allow courts to consider that as an aggravating factor. This is particularly true if the defendant influenced or controlled others involved in the offense.

Hate Crimes: Some states have enacted laws that allow sentencing enhancements if the state proves that the defendant was motivated by bias or animus based on a group characteristic. Most hate crime statutes include categories like race, religion, and national origin. Some states include categories like sexual orientation and gender identity as well.

Mandatory Minimum Sentencing: For certain offenses, the circumstances of the case may trigger laws that remove a court’s discretion to adjust a sentence downward. Mandatory minimum sentencing laws are still common for many drug-related offenses. The penalties for offense involving crack cocaine, for example, used to vary widely from the penalties for offenses involving cocaine in powder form, due to mandatory minimum laws targeting crack. The Fair Sentencing Act of 2010 sought to eliminate the disparity, but other laws still have a similar effect.

The defense may put on evidence of mitigating factors that would support leniency in sentencing. Criminal statutes devote far less attention to factors that might mitigate a defendant’s punishment, but courts have held that evidence relating to a defendant’s character may be introduced provided that it is relevant to the sentencing process. See Lockett v. Ohio, 438 U.S. 586 (1978). Common mitigating factors include: