A violent crime or crime of violence is a crime in which an offender or perpetrator uses or threatens to use force upon a victim. This entails both crimes in which the violent act is the objective, such as murder or rape, as well as crimes in which violence is the means to an end. Violent crimes may, or may not, be committed with weapons. Depending on the jurisdiction, violent crimes may vary from homicide to harassment. Typically, violent criminals includes aircraft hijackers, bank robbers, muggers, burglars, terrorists, carjackers, rapists, kidnappers, torturers, active shooters, murderers, gangsters, drug cartels, and others.

Violent crimes are those criminal offenses that involve the use of force and violence. At times, they can also involve the mere threat of force or violence, even if the threat wasn’t carried out. The term “violent crime” covers a broad spectrum of offenses including: sexual assault, rape, simple assault, aggravated assault, robbery and murder.

The comparison of violent crime statistics between countries is usually problematic, due to the way different countries classify crime. Valid comparisons require that similar offences between jurisdictions be compared. Often this is not possible, because crime statistics aggregate equivalent offences in such different ways that make it difficult or impossible to obtain a valid comparison. Depending on the jurisdiction, violent crimes may include: homicide, murder, assault, manslaughter, sexual assault, rape, robbery, negligence, endangerment, kidnapping(abduction), extortion, and harassment. Different countries also have different systems of recording and reporting crimes.

The first annual national survey of crime victimization in Australia, the Crime Victimisation Survey, was conducted in 2008-09. Personal crimes included in the survey are:

In 2009, the Australian Standard Offence Classification (ASOC), which had no single category for violent crime, was replaced by the Australian and New Zealand Standard Offence Classification (ANZSOC). The ANZSOC also has no single category for violent crime, but the first 6 of its divisions involve offenses committed against a person:

New Zealand’s crime statistics has a category for violence that includes homicides, kidnapping, abduction, robbery, assaults, intimidation, threats, and group assembly, while all sexual offences are shown in a separate category from violence.

Austria, Czech Republic, Finland, Germany, England, Latvia, Netherlands, Portugal, Greece and Sweden count minor violence like slapping another person as assault.An example is the case of Ilias Kasidiaris in 2012. Kasidaris, then spokesperson for Greece’s far-right Golden Dawn party, slapped a left-wing female opponent in the face during a live televised debate. He was subsequently wanted by Greek prosecutors for assault and faced an arrest warrant.

France does not count minor violence like slapping somebody as assault.

The United Kingdom includes all violence against the person, sexual offences, as violent crime.Today violent crimes are considered the most heinous whereas historically, according to Simon Dedo, crimes against property were equally important. Rates of violent crime in the UK are recorded by the British Crime Survey. For the 2010/2011 report on crime in England and Wales, the statistics show that violent crime continues a general downward trend observed over the last few decades as shown in the graph. “The 2010/11 BCS showed overall violence was down 47 per cent on the level seen at its peak in 1995; representing nearly two million fewer violent offences per year.” In 2010/11, 31 people per 1000 interviewed reported being a victim of violent crime in the 12 preceding months. Regarding murder, “increasing levels of homicide (at around 2% to 3% per year) [have been observed] from the 1960s through to the end of the twentieth century”. Recently the murder rate has declined, “a fall of 19 per cent in homicides since 2001/02”, as measured by The Homicide Index. 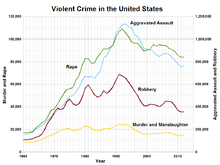 Violent crime in the United States per the Uniform Crime Report (UCR).

There are significant methodological and definitional differences between the NCVS and UCR:

Since they use different methodologies and measure overlapping, but not identical, crimes, the data are complementary and not necessarily congruent.

Violent crimes can happen in one of two ways:

One of the most common types of violent crime involves assault. The actual definition of assault means that there was an intentional threat or use of force against another person; however, actual contact need not take place. Merely threatening to harm someone, coupled with the present ability to carry out that threat constitutes assault. Assault charges can range from simple assault charges to aggravated assault. In many cases assault is charged as a misdemeanor; however, it can also be charged as a felony offense. Battery is very similar to assault, except for the fact that actual physical contact must have taken place between the suspect and the victim or between a weapon and the victim.

In more than half of robberies, the victims will be confronted with a weapon such as a knife, or gun. Robbers use weapons to instill fear in their victims so they can control them and get them to hand over whatever it is that they are taking. If the suspect possesses a weapon during the commission of a violent crime, they will face penalty enhancements even if they never used the weapon against the victim or discharged a firearm. The mere presence of a weapon during the commission of a crime will incur penalty enhancements.

Sexual assault is a form of non-consensual contact or forcible rape. Although most victims of sexual assault do not encounter a weapon, sexual assault still falls under the category of violent crime and will be punished as such.

The most serious of all violent crimes are those involving homicide. There are different degrees of homicide, and they are based on the severity of the offense. Murder and manslaughter charges vary depending upon a variety of factors including: intent, malice, aforethought, self defense, and other facts surrounding the case. For instance, a person who accidentally kills another person in a car accident will most likely face lighter penalties than a person who premeditates a murder and carries it out.

When a person is convicted of a violent felony, they will typically be prohibited from possessing a firearm. They will also face incarceration, fines, restitution, community service, and probation among other penalties. In the case of a serious violent felony, the person might even face the death penalty in the state of Florida. If you or a loved one were charged with a violent crime, it is absolutely necessary that you retain the services of a skilled and aggressive criminal defense attorney.

Everyone has the right to a defense; a lawyer will be able to offer you the guidance you need during this very difficult time. They will be able to go through the evidence with a fine tooth comb and unearth any mitigating circumstances that might help get the charges against you reduced or dropped entirely.