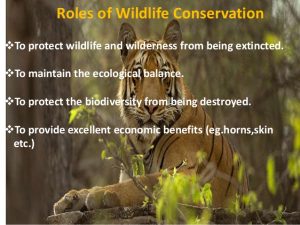 Wildlife effectively encompasses all forms of life, whether plant or animal which are found wild in nature and also include marine, freshwater and coastal ecosystems. Wildlife conservation is the endeavour to protect the endangered animal and plant species, along with their natural habitat which has been advocated through the years by many government and NGOs worldwide. For instance, the World Wildlife Fund (WWF) is an international organisation whose key aim is to conserve the nature and to reduce the most pressing threats to the diversity of life on the planet. The Living Planet Report, 2017 of WWF reveals that the world populations of wildlife are declined by 58% since 1970 to 2012. On the other hand, the INTERPOL estimates that internationally the illegal wildlife trade is about 10 to 20 billion USD each year.

It is worth mentioning here that Bangladesh is a State party to all of these aforementioned international legal instruments. Also it is one of the mega biodiverse States in this present world and a wide variety of animal diversity is found in the wilderness areas of this country. Article 18A of the Constitution of Bangladesh deals with the protection and improvement of environment and biodiversity and provides, “The State shall endeavor to protect and improve the environment and to preserve and safeguard the natural resources, bio-diversity, wetlands, forests and wild life for the present and future citizens”.

Though all legislations are commonly based on the sovereign decisions made at national levels, States are also bound by the provisions of the world treaties to which they are parties and hence should base their legislations on the provisions of these treaties. The enactment, implementation and enforcement of legislations on the cross-border movement of wildlife animals are performed by the national bodies of individual States. Likewise in Bangladesh, though few areas are protected under the existing laws, a large portion of its wildlife is currently under serious threat.

There is a wide variety of animal diversity to be found in the wilderness areas of Bangladesh, so nature lovers can really take their time to enjoy this side of the country. Even though Bangladesh is one of the most highly populated countries in the world, the majority of the population lives in or around large cities and this has helped to limit deforestation to some extent. However, the growth rate continues to increase at an alarming rate and this has placed large demands on the environment and lead to subsequent clearing of numerous natural habitats. Though several areas are protected under law, a large portion of Bangladeshi Wildlife is threatened by this growth.

Wildlife includes all non-domesticated plants, animals, and other organisms. Domesticating wild plant and animal species for human benefit has occurred many times all over the planet, and has a major impact on the environment, both positive and negative. Wildlife is any vertebrate animal other than human being, domesticated animals and fishes, living in its natural habitat. Members of Amphibia, Reptilia, Aves, and Mammalia, their eggs or Youngs are included in wildlife. Wild animals can live independently without the help or care of man. Not necessarily a wild animal has to live in forests or jungles; a wall lizard, a sparrow, a pigeon, a myna or a crow are all members of wild FAUNA. Wildlife can be found in all ecosystems, Deserts, rainforests, plains, and other areas including the most developed urban sites—all have distinct forms of wildlife. While the term in popular culture usually refers to animals that are untouched by human factors, most scientists agree that wildlife around the world is impacted by human activities.

conducive to several species of flora and fauna. Heat waves will

be frequent and droughts may be recurrent.

The wildlife of Bangladesh includes Bangladesh’s flora and fauna and their natural habitats. The majority of the human population lives in or around large cities and this has helped to limit deforestation to some extent. However, the growth rate continues to increase at an alarming rate and this has placed large demands on the environment and lead to subsequent clearing of numerous natural habitats. Though several areas are protected under law, a large portion of Bangladeshi wildlife is threatened by this growth.

Bangladesh is home to roughly 22 species of amphibian, 17 species of marine reptiles, 109 species of reptile, 388 species of birds, 110 species of mammals and 3 species of marine mammals. In addition to the large bird count, a further 240 species of migratory birds swell bird numbers each year. The vast majority of these creatures currently dwell in an area of land that is some 150 000 sq kilometers in size This is a remarkable achievement to say the least. However this does not mean all is well with the country’s natural heritage. So far a number of creatures have disappeared completely from the country and a further 201 species are threatened. Notable species that have disappeared from Bangladesh are the one-horned Rhinoceros, the two-horned Rhinoceros, the Gaur, the Ganteng, Hog deer and swamp deer, wolf, marsh crocodile and wild buffalo. Generally speaking, such a large loss will usually effect the environment to a greater or lesser degree and result in environmental imbalances.64

Forest Department under the Ministry of Environment and Forests, Government of the People’s Republic of Bangladesh is responsible for preservation, conservation and management of Wildlife in the country. The Chief Conservator of Forests is the Chief Wildlife Warden. There is a Circle named Wildlife and Nature Conservation Circle administered by an officer in the rank of Conservator of Forest. There are Four Wildlife Management and Nature Conservation Divisions under this Circle. Each of the Division is administered by a Divisional Forest Officer. In addition, there are two Botanical Gardens in the country.