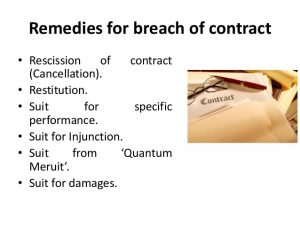 Breach of contract for injunction

When a party breaches a contract, a court will usually award money damages to the innocent party. But there are other types of remedies. Equitable remedies are different than monetary damages. This lesson explains specific performance and injunctions, which are equitable remedies. 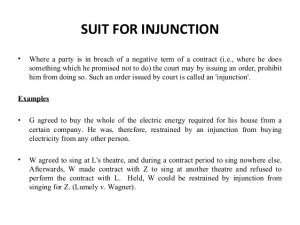 What is an Injunction?

Injunctions are court orders that compel a party to take a specific action or refrain from doing something. They are considered to be equitable remedies because they address issues that cannot be remedied with monetary damages. Injunctions can be entered as a judgment order for an active lawsuit or can be filed as a separate request directly with the court.There are three main types of injunctions:

When are Injunctions Ordered in Breach of Contract Cases?

Injunctions are frequently awarded in cases involving breach of contract and are often given in lieu of monetary damages. The non-breaching party may even be required to choose between a monetary damages award and an injunction. Some common contract claim injunctions include the following:

What Happens if a Party Fails to Follow an Injunction Order?

If a party fails to follow the terms of an injunction order, they will face certain consequences. In a contract case, this will usually be money damages. For example, a party may be fined a set amount of money for each day that they fail to follow the court order. A party could also be held in contempt of court.

How Can You Remove an Injunction?

Injunctions can last anywhere from as little as two weeks to six months, and it will completely depend on the court’s discretion. As mentioned above, the court will pick the length of time depending on how much protection it will give the plaintiff and how much burden it will put on the defendant.

The factory also produces other items, but due to the injunction they cannot produce anything which means that they will not earn any income. This injunction would most likely be considered too harsh, and will be altered or removed.

Money damages are a legal remedy. A remedy is any court order that imposes a penalty or enforces a right. Though not common, there are remedies other than legal remedies available for breach of contract.

These remedies were developed through the old English laws of equity, as used in the historic courts of equity. These courts exclusively granted equitable remedies, and the courts of law granted legal remedies. Eventually, these courts were merged, and legal courts had the authority to grant both types of remedies.

It’s helpful to note that equitable remedies are rarely used. These options are only used in cases where money damages are either too difficult to calculate or are inadequate to remedy the harm done to the innocent party. Let’s take a closer look at the two main equitable remedies available for breach of contract.

In a breach of contract case, the court can consider ordering specific performance as long as the innocent party asks for that remedy. This equitable remedy orders the breaching party to comply with the terms of the contract. This means that the breaching party will be required to do whatever the party originally promised to do.

The court will consider this option when money damages won’t provide the innocent party with adequate compensation for the breach. Specific performance is most common in sales contracts. This remedy is sometimes used when a sales contract involves something unique, such as a particular tract of land, a rare heirloom, or a priceless art piece.

Specific performance is best understood by considering an example. Let’s say that Arty is an art dealer. He acquires a rare, ancient Egyptian statue that is thought to have belonged to Cleopatra. Andrea collects Egyptian art and makes a sizable offer to buy the piece. Arty agrees, and the two make a valid legal contract.

Arty then decides that he’d rather keep the piece for now. He breaches his contract with Andrea. Andrea sues Arty for breach of contract. The court decides that the piece is truly priceless, and Andrea can’t acquire another comparable piece no matter how much money the court awards her. Instead, the court decides that Arty should comply with the terms of the contract, and sell the piece to Andrea for the price she already agreed to pay. This is specific performance.

Where parties have agreed that a suit relating to certain matter should be brought in a particular court within the country, an injunction may issue to restrain filing the suit in any other court.

In a suit by the highest bidder for declaration that acceptance of the tender of the bidder quoting lesser amount was illegal and for permanent injunction, the lower court passed an order for maintenance of status quo which was treated to be an order of injunction and the Appellate Division held that the highest bidder had no actionable right to be entitled to an order of injunction. The Appellate Division observed, “Had it been the case that the tender was accepted in violation of a condition which has been mentioned in the tender form, then an argument could be advanced for seeking the protection of the inchoate right of the tenderer.” But in Umme Kawsar v. Shams Corporation the court held that the above observation “did not decide any point, but merely refers to the possibility of raising an argument for protecting such right of a tenderer if he has only been able to prove that some conditions laid down in the tender notice has been violated prior to accepting the same.” In the subsequent case of Mozher Sowdagar v. Zahirul Alam 10 DLR the Appellate Division upheld that order of the High Court Division setting aside the order of temporary injunction stating, “Even if it were the highest offer, he by that offer did not acquire any right t purchase the vessel, as his offer was not accepted by the Corporation which reserved full power to reject offer, and no agreement was concluded with him.” But there has been shift from this position and the Appellate Division upheld the declaration of illegality by the High Court Division at the instance of a tenderer when another tenderer’s bid was held responsive in violation of the tender terms. In similar situation, a tenderer may seek invalidity of the action of the authority inviting tender on the ground of violation of tender terms and press for an order of temporary injunction.

Are There Any Defenses to an Injunction?

The breaching party may sometimes be able to raise a defense if the plaintiff is seeking an injunction against them. This includes the following defenses: