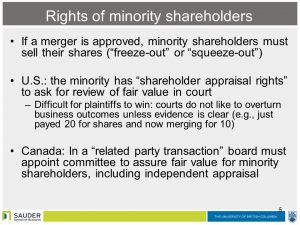 Minority shareholders are often effectively deprived of any real say in the running of the company and they may find that the company is run in a way which benefits the majority at their expense.

The “minority” may have more shares, but lack control due to how the company is structured; for example, they may include non-voting shareholders. Here, non-voting shares are equity (the stake its owners have in a company) that does not have a vote, even though it is entitled to a share of the profits.

Every shareholder has the basic right to vote on company decisions, with one share of stock usually equaling one vote. The primary application of that right is to elect the officers and directors who manage day-to-day operations. Shareholders can also vote on the company’s mergers and acquisitions and on the sale of company assets. Minority stockholders who feel majority stockholders are making decisions detrimental to the company can request that the company buy back their stock at market value.

Minority stockholders also have the right to review the company’s financial statements. While publicly traded corporations must submit their financial statements to the Securities and Exchange Commission, privately held corporations are under no such obligation. Minority stockholders in private corporations must submit a written request to view company income statements, balance sheets, statements of shareholder equity and other relevant financial documents. They can then review the documents to determine if the company is still a worthwhile investment.

1.2 Nature of the Minority Shareholder Rights:

Shareholders have the right to expect their officers and directors to act in good faith, with due diligence and in the best interests of the corporation. This right becomes even more

important to minority shareholders who, as a result of their limited ownership in the corporation, have little if any practical control over corporate affairs. Shareholders also have the right to prevent directors from becoming personally involved in transactions with the corporation in which they have a conflict of interest or from lending money to themselves or guaranteeing their own debts. Although their are statutory means by which directors and shareholders may approve these transactions, these rules provide some structure and protection for minority shareholders.

As noted above, shareholders may question the decisions of officers or directors and this can be done in the name of the corporation through derivative actions. These are civil lawsuits brought to recover damages under a right that belongs to the corporation.

Some of these rights are fundamental in nature and meant to protect the interest of all shareholders, while others seek to protect minority shareholders. The exercise of rights by minority shareholders can at a minimum be an irritant and could cause a great deal of wasted time and effort if exercised with an adversarial agenda. Now places added emphasis on understanding the rights of minority shareholders. In some cases affirmative action is now required in order to effectuate certain protection for minority shareholders. Understanding these rights is important to keeping the relationship among shareholders well structured and meeting the expectations of all involved.  Unfortunately, this aspect of a business is not often very high on the priority list of those organizing the corporation. It is, however, one of those areas where the allocation of resources early in the life of a corporation can help avoid the expenditure of a great deal more time and money after the business has matured and the relationship of the parties has changed.

A majority shareholder is one who owns 50% or more of the shares in a company. This can be an individual or a group who have formed to pass a specific resolution. A minority shareholder is the opposite; anyone owning less than half of shares. The majority is Goliath to the minority’s David.

It’s normal for a single majority shareholder to exist in a limited company who happens to be the company director. However in a PLC there may be literally hundreds of shareholders all in the minority.

For example, if you own 49 shares in a company with 100 shares, you would won 49 votes and 49% of the company. However, you don’t need to vote for every share you own – it is combined into one single paper and your percentage equated.

The powers of the shareholders in their decision making is ruled by the Majority Rule. So the decisive power lies with Goliath. The rule states that if there is a disagreement with regards to a particular decision once voted upon, then the majority shareholders will decide the outcome.

Therefore, in a situation where 50% of the vote is required to pass a resolution (Ordinary Resolution), a majority shareholder would be able to force this decision.

This rule has been extended to cover situations where the directors, who have the ultimate management of the company, refuse to take action in a case of irregularity of internal management. The majority shareholders can take action in the company’s name instead.

If you’re the David of the situation, it would seem that you have no power or control, but never fear – the law does offer you a handy metaphorical slingshot for protection.

A shareholder has the right not to be unfairly prejudiced (see Companies Act 2006 section 994(1)). Unfair prejudice arises when a shareholder believes that the conduct of the company’s affairs are affecting them unfairly. It usually arises in a situation where a director is also a majority shareholder and is using their joint roles to abuse their position. The courts decide a point of unfair prejudice, but it’s a lengthy and costly process where it’s vital to seek legal advice.

If you hold a 5% shareholding there are various options available to you with regards to your rights but these only act to provide you with an opportunity to voice your opinion, for example, the right to circulate a written resolution, request a general meeting or circulate a written statement at a general meeting. Whilst this will give you the opportunity to express your concerns, ultimately, if you can’t alter the opinion of the majority then the decision will remain in place.

Unfair prejudice is an intricate point of law but it’s explained further on our Knowledge Hub.

When you buy shares you should be provided with a shareholders’ agreement, which sets out the T&C’s of the shares you own.

The agreement may or may not offer contractual protection for the minority shareholder. It’s best to review the agreement if you feel that a decision is incorrect and you’re in the minority. Whilst you may have read this agreement when you purchased the shares, it’s always best to refresh your memory and check if the terms offer you any protection.

An example of this would be where a director who is a majority shareholder has use their power to ratify any wrongdoing, in their role as a director, such as a breach of their director duties.

This is another complex point of law to be decided by the courts, and it’s vital to seek legal advice if you have suspicions that a case may have arisen.

1.3 Right of Minority under the Companies Act:

The members or shareholders of a company enjoy various rights which are derived from the Companies Act, 1994 or from the memorandum or articles of association of the company and minority shareholders may exercise the same for their protection. The rights may be as follows:

1.4 Right of Minority Under the Common Law:

If the majority of the shareholders do any act which is not permissible by the Memorandum or Articles of Association of a company then it will be amounted as ultra vires act and for this type of ultra vires act, the minority is entitled to file a suit to enforce rights. The above mentioned right has been illustrated in the case of Bharat Insurance Co Ltd. V. Kanhaiy Ltd. AIR 1935 Lah 792.

If the majority does any illegal act which is not permissible by law, the minority can take step to enforce their rights.

Where the decision of majority constitutes fraud on minority, the minority has right to sue. In this regard EVERSHED MR quoted in the case of Greenhalgh v. Arderone Cinemas Ltd  that-

“a special resolution would be liable to be impeached if the effect of it •were to discriminate between the majority shareholders and minority shareholders, so as to give to the former an advantage of which the latter were deprived.”

Each and every member of a company belongs to some membership rights such as right to attend meetings, right to receive dividends, right to vote etc. If the articles provide any specific right for any particular of shareholder, any deprivation of the right will entitle him to file a suit to enforce his rights.

An individual shareholder will be justified to bring an action in case of any wrong caused by the majority of the shareholders controlling the power.

Lastly, if it happens that by oppression and mis-management, the rights of the

minority shareholders are infringed, they are allowed to bring an action.