Note that the relevant law has now been consolidated in the Powers of Criminal Courts (Sentencing) Act 2000. Powers are presented here in sectional order as they appear in the 2000 Act. 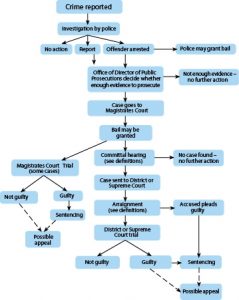 The court may defer passing sentence on an offender for the purpose of enabling the court to have regard in dealing with him to (a) his conduct after conviction (including, where appropriate, the making by him of reparation for his offence); or (b) any change in his circumstances.
Sentencing may be deferred for up to six months only if the court is satisfied, having regard to the nature of the offence and the character and circumstances of the offender, that it would be in the interests of justice to exercise the power:s1.

Note: some of the community orders were renamed by the Criminal Justice and Court Services Act 2000.

A community order is (a) a curfew order; (b) an exclusion order; (c) a probation order; (d) a community service order; (e) a combination order; (f) a drug treatment and testing order; (g) drug abstinence order; (h) an attendance centre order; (i) a supervision order; (j) an action plan order; and may be imposed on offenders over the age of 16: s33
The offence must be serious enough to warrant such a sentence: s35(1). The community sentence must be suitable for the offender and the restrictions on liberty must be commensurate with the seriousness of the offence: s35(3).
The court need not consider a pre-sentence report, except in the case of an offender under 18 who has committed an indictable offence: s36.

The courts may pass curfew orders on an offender aged 16 or over, requiring him to remain at a specified place for between 2 and 12 hours per day, for up to six months: s37
Curfew orders may be enforced by electronic monitoring arrangements, i.e., ‘tagging’: s38

This order was introduced by s46 of the Criminal Justice and Court Services Act 2000, which inserted a new s40A into the PCCSA 2000.
The court may make an order prohibiting an offender from entering a place specified in the order for a period so specified of not more than two years.
The exclusion order will make a responsible officer responsible for monitoring the offender’s whereabouts during the periods when the prohibition operates.
The court has power to review the order on the application of the offender, the responsible officer or any affected person.

Where a person aged 16 or over is convicted of an offence and the court is of the opinion that his supervision is desirable in the interests of (a) securing his rehabilitation, or (b) protecting the public from harm from him or preventing the commission by him of further offences, the court may make an order requiring him to be under supervision for a specified period between six months and three years: s41.
The defendant will be placed under the supervision of a responsible officer (ie, a probation officer or member of a Youth Offending Team: s41(5)), with whom he must stay in regular contact.
The court can include in a probation order a range of additional requirements: s42. For example, residence, attendance at a probation centre, treatment for mental condition, and treatment for drug or alcohol dependency (Schedule 2).

A combination order requires an offender, aged 16 or over, to be supervised by a responsible officer for between 12 months and 3 years and to perform between 40 and 100 hours’ unpaid work: s51.
The making of a combination order must be desirable in the interests of (a) securing the rehabilitation of the offender; or (b) protecting the public from harm from him or preventing the commission by him of further offences: s51(3)

This sentence is available for offenders aged 10-20. For details, see “Powers of Courts – Young Offenders”.

This sentence is available for offenders aged 16-18. For details, see “Powers of Courts – Young Offenders”.

This sentence is available only for young offenders.

Offenders over the age of 21 may be imprisoned.
The offence must be so serious that a prison sentence is justified for the offence; or the offence is a violent or sexual one and prison would protect the public from serious harm from him: s80(2).
Minimum sentences will be imposed on offenders over 18 for certain offences, unless there are exceptional circumstances: ss109-111.
Prisoners serving less than four years will be released on completing half of their sentence and longer-term prisoners will be released on serving two-thirds of their sentence (Part II Criminal Justice Act 1991).
Mandatory and discretionary life prisoners may be released on licence after they have served the tariff (Part II Criminal Justice Act 1991).

A prison sentence of up to two years may be suspended for between one and two years: s118.
If the defendant does not commit an imprisonable offence during that period, the suspended sentence is not brought into effect.
If the defendant does commit an imprisonable offence during the period, the sentence may be brought into effect unless it would be unjust to do so.
The case must be one where imprisonment would have been appropriate but a suspended sentence can be justified by the exceptional circumstances of the case: s118(4).
The court has to consider whether the circumstances of the case warrant in addition a fine or the making of a compensation order: s118(5).
Where a court passes a suspended sentence for a term of more than six months for a single offence, the court may make a suspended sentence supervision order, ie, an order placing the offender under the supervision of a supervising officer for a period which is specified in the order and does not exceed the operational period of the suspended sentence: s122.

The Crown Court can fine a defendant instead of or in addition to passing a sentence of imprisonment: s127. The Crown Court’s fining power is unlimited.
The magistrates may impose a fine of up to £5,000 if the relevant statute states that they may.
The court must inquire into the offender’s financial circumstances before fixing the amount of a fine: s128(1). The fine should reflect the seriousness of the offence: s128(2).

The court, instead of or in addition to dealing with an offender in any other way, may make an order requiring him (a) to pay compensation for any personal injury, loss or damage resulting from that offence(s); or (b) to make payments for funeral expenses or bereavement in respect of a death resulting from any such offence, other than a death due to an accident arising out of the presence of a motor vehicle on a road (subject to exceptions): s130(1).
A court shall give reasons, on passing sentence, if it does not make a compensation order in a case where this section empowers it to do so: s130(3).
In determining the amount to be paid, the court must take into account the defendant’s means: s130(11). The maximum amount of compensation a magistrates’ court can order is £5,000: s131(1).

A court can order an offender to be deprived of property he has used or intended to use to commit an offence: s143.
Where the court makes a deprivation order in a case where the offender has been convicted of an offence which has resulted in a person suffering personal injury, loss or damage, the court may also make an order that any proceeds which arise from the disposal of the property and which do not exceed a sum specified by the court shall be paid to that person: s145.
The courts can take from criminals all profits from crime for up to six years before conviction by virtue of the Proceeds of Crime Act 1995.

A restitution order requires that the defendant return any property obtained from the victim.
Where goods have been stolen and a person is convicted, the court may: (a) order anyone having possession or control of the stolen goods to restore them to any person entitled to recover them from him; or (b) on the application of a person entitled to recover from the person convicted any other goods directly or indirectly representing the stolen goods (as being the proceeds of any disposal or realisation of the whole or part of them or of goods so representing them), the court may order those other goods to be delivered or transferred to the applicant; or (c) order that a sum not exceeding the value of the stolen goods shall be paid, out of any money of the person convicted which was taken out of his possession on his apprehension, to any person who, if those goods were in the possession of the person convicted, would be entitled to recover them from him: s148.

11. BINDING OVER TO BE OF GOOD BEHAVIOUR

A person can be bound over to be of good behaviour, even if they have not committed a crime, for up to one year. They enter into a bond or recognisance to perform or abstain from performing an act (s115 Magistrates’ Courts Act 1980).