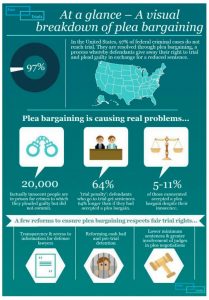 1. It removes uncertainty from the legal process.
Defendants who take a plea bargain eliminate the uncertainty that a trial may bring. It is also a way to take away the maximum sentence that could be imposed if they were found guilty by a judge or a jury. In the United States, nearly 500,000 people are held in prison with charges, but are awaiting trial, which means they do not have a conviction. Plea bargaining speeds up this process.

2. It creates certainty for a conviction.
Prosecutors are also gambling when they take a defendant to trial. There is always a chance that the jury will find the defendant not guilty. By agreeing to a plea bargain, it creates a certainty for a conviction. It gets that person off the street or assigns a penalty that can still bring a measure of justice. That allows prosecutors to pursue other cases because they have more time.

3. It can be an effective negotiating tool.
One way to secure witnesses for a large case is to offer a plea bargain that includes testifying against another person. This process allows prosecutors to put everyone involved in a serious case into prison and allows them to pursue the maximum sentence against the person or people they feel are most responsible for a crime when it occurs.

4. It provides more resources for the community.
If a case is taken to trial, every police officer involved in the investigation that led to charges may be asked to testify during the proceeding. Law enforcement officers from other agencies may be called upon. Psychologists may be asked to perform evaluations over a person’s competency. In the United States, the NCJRS reports that the cost of prosecuting and defending a drug offender in the criminal justice system may be over $70,000 per incident. If there are just 10 cases like this, more than $700,000 in taxpayer funds will be spent. A plea bargain could reduce this cost to $4,200 per case.

5. It reduces population levels in local jails.
Many who are awaiting trial are kept in jails at the local level. These jails are usually run by city or county officials and provide little in the way of rehabilitation, education, or therapy. They are holding centers with a bed, meals, and not much else. With a plea bargain moving cases through the criminal justice system faster, it becomes easier to give people the resources they need if they wish to make changes in their lives.

From the defense standpoint, the benefits of plea bargaining are numerous. Here are some of the most commonly cited justifications for agreeing to a plea bargain.

One of the primary reasons that defendants agree to plea bargains is simple anxiety. If a case goes to trial, they might get off — but they also might get the maximum sentence. Most people can’t stand living in a state of constant anxiety and prefer certainty, so they sign plea agreements.

A big reason for agreeing to a plea bargain is to avoid jail time. Not having to go to jail and live with the stigma associated with it, and not being separated from family and friends is a huge incentive to sign a plea agreement.

The most common form of plea bargain, a reduction in the severity of the charge, is a great benefit to a defendant. A lesser charge looks better on a permanent record, won’t have as serious an impact on future convictions (especially in “three strikes” states) and may not exclude the defendant from a variety of things that those convicted of more serious charges are prohibited from doing (eg, voting).

Sometimes the prosecutor does not lower the charge, but rather lessens the sentence sought to something below the maximum allowed sentence for a crime. While not nearly as advantageous as a reduction in the charge, the difference in sentencing can be a matter of years and crucially important to a defendant.

Probably the most practical reason plea bargains are sought is simply to resolve the issue as quickly as possible and move on. It may not be the most “just” outcome, but many defendants simply want to move on with their life.

One of the biggest tools prosecutors or defendants can use is the media. As a result, many defendants simply want to keep the matter quiet, without dragging the case out in front of the public.

Finally, there are a multitude of hassles that come with going to trial. The time, expense and exposure can be exceptionally draining on a defendant, and many defendants will seek a plea bargain just to avoid the circus that may accompany a trial.

Not everyone agrees that plea bargains are really a good deal for defendants, especially where many of the considerations seem to favor time, expense, and convenience over justice. Finally, many defendants agree to plea bargains simply out of fear or ignorance in which case no one is well served — neither the system nor the defendant. You should always discuss these matters with an attorney before deciding.

Is a Plea Bargain Right for You? Contact a Lawyer to Learn More

Despite the various benefits of plea bargains, deciding whether it’s the best path for your case can be difficult. With the help of an experienced professional, you can get insight into what your chances of winning at trial may be and how the plea may compare to the consequences of a judgment against you at trial. Contact a local criminal defense attorney, who can discuss your case and options to proceed.

1. It removes the right to have a trial by jury.
In the United States, every person has a Constitutional right to have a trial by jury. Offering a plea bargain to avoid this trial may seem like a coercive attempt to waive those rights. Pressuring a defendant into accepting a plea deal could be deemed illegal. A defendant must always have the right to take their case to trial for a plea bargain to be an effective tool.

2. It may lead to poor investigatory procedures.
Since 90% of cases in many jurisdictions go to a plea bargain instead of a trial, there is an argument made that this concept leads to lackluster investigation practices. Attorneys and law enforcement officials may not spend time to prepare a case because they have an expectation that it will plead out. Instead of trying to secure justice, the goal is to make a deal, and it could be argued that expecting a deal really isn’t justice.

3. It still creates a criminal record for the innocent.
An innocent person may agree to a plea bargain to cut their losses. That agreement means they will have a criminal record. They may be asked to serve time in prison. There may be fines or restitution to pay. Even if a plea bargain isn’t accepted, there may be legal expenses to pay that may be greater than the cost of what a bargain offers, which leads to an acceptance of a deal.

5. Plea bargains eliminate the chance of an appeal.
If a case goes to trial and a defendant loses, there may be several grounds upon which an appeal may be filed. Because a plea bargain requires a defendant to plead guilty to the charges, even though they are reduced, it eliminates the ability to file an appeal in almost any circumstance.

6. It provides soft justice for the guilty.
In many circumstances, a plea bargain provides a lighter sentence for someone, even if they may be guilty. It can be treated as an escape route for a prosecutor. Some may argue that a guilty plea and a guaranteed sentence is not the same as being found guilty and having an accurate sentence imposed.

The advantages and disadvantages of plea bargaining may get criminals off the streets, but it could also put innocent people into prison. It opens up a court schedule, but changes the effectiveness of the criminal justice system.