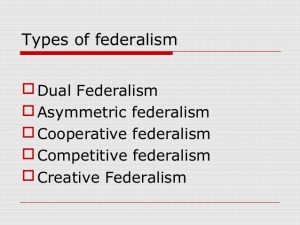 First of all if we have to know whether “the Indian constitution carries the pattern or strands of asymmetric federalism” we will have to get some quick brief on what is a federalism and what do we mean by ‘asymmetric’ here? In simple words asymmetric means when the two parts of a thing are not equal or same proportion. And federalism is an idea of a federal organization of more or less self-governing units.

“Asymmetric federalism” is federalism based on unequal powers and relationships in administrative, political and fiscal agreements spheres between the units which constitute a federation.

Asymmetric federalism is found in a federation in which different constituent states possess different powers. One or more of the states has considerably more independence than the other sub states, though they have the same constitutional status. The division of powers between sub states is not symmetric. This is opposite to a symmetric federation, where no distinction is made between constituent states. Generally ‘Asymmetric federalism’ is preferred as a solution when one or two constituent units or states feel significantly different needs from the others, as the result of an ethnic, linguistic or cultural difference. The difference between an ‘Asymmetric Federation’ and ‘Federacy’ is unclear; a federacy is essentially an extreme case of an asymmetric federation, either due to large differences in the level of autonomy, or the rigidity of the constitutional arrangements. An asymmetric federation however has to have a federal constitution and all states in federation have the same formal status (“state”), while in a federacy independent substate has a different status (“autonomous region”). Asymmetry form of federation can be seen in between two states and also between state and centre.

Special provision for Jammu and Kashmir

The article 370 of the constitution of India has been defined being temporary in nature. According to the article 370(3) of the constitution the president, may declare by public notification that the article 370 shall cease to be operative, or shall be operative only with such modification and exception, and from such date as he may specify. The recommendation of the Constituent Assembly “shall be necessary” before the president can issue any such notice.

STATE OF MAHARASHTRA AND GUJARAT

By article 371(2)  of the constitution of India the president has power to lay special responsibility on the governor of Maharashtra or Gujarat for the development of certain areas of that particular state. While discharging the special responsibility which is given to the governor of the state by the president, the governor has to follow the direction which is issued by the president. The original article 371 said that for a period of ten years or for a longer or shorter period as may be provided by the parliament, the states under part B shall be under general control of the president and shall obey the direction laid down by the president. When the reorganisation and abolition of categorization of states was done, the original article 371 of the constitution lost all its relevance.

The new article 371 substituted for the original article bearing the same number by the constitution (seventh amendment) Act, 1956, made certain provision for the state of Andhra Pradesh, Punjab and Bombay. Clause (1) of the article gives the president the power to set uo regional committees of the legislative assemblies of the state of Andhra Pradesh and Punjab. The order of the president setting up such regional committees could provide for their constitution and function and make necessary medications in the rule of business of the state Governments and in the rules procedure of the state legislative assembly.  For the special responsibility by the governor of these states in order to secure the proper functioning of these states fir securing the proper working of these regional committees.

This article was amended by the constitution (seventh Amendment) Act 1956 with effect from 1st November 1956 and by the constitution (thirty-second Amendment) Act 1973 with effect from 1st July 1974. The non obstane clause in Art. 371 cannot have effect of conferring some special immunity and privilege on member of legislature by reason simply of his being a member of a regional committee.

The president may by order, made with respect to the state of Maharashtra or Gujarat, provide for any special responsibility of the governor for-

The establishment for different development boards for-

Vidharbha, Marathawada and the rest of Maharashtra;

Saurashtra, Kutch and the rest of Gujarat.

The provision requiring that a report on the functioning of each these boards will be placed each year before the state legislative assembly, may contained in the order.

The reasonable distribution of funds for developmental expenses over state of Maharashtra and Gujarat, subject to the requirement of the concerned state as whole;

During the process of administrative reorganisation of India, the authorities focused on the creation of new boundaries based on the different languages being used in different part of the country at that time. But religion, caste, ethnicity or tribal were not the elements for the division but North-eastern part was one major exception to this. In the north-eastern part of the country there is a different ethnicity from the rest of the country. The states which are in this part of the country are Arunachal Pradesh, Assam, Manipur, Meghalaya, Mizoram, Nagaland, Sikkim and Tripura. Initially most of the states were Union Territories, after this reclassification all of these sates were at the same level; each state has a political power to that of other states.

Article 371 of the Constitution of India gives special power to the north-eastern states, these special powers which has been given to all these states has been introduced through amendments. The government of India on 11th, September, 1968 announced the details of the scheme for constituting within the state of Assam an autonomous state comprising some areas specified in Part A of the constitution. By the constitution (twenty-second Amendment) 1969 new articles 244A and 371 B were inserted. The article 244 A provided for a new state Assam and local legislature. Article 371 B provided for the constitution of a committee of Assam Legislative assembly consisting of the member of the assembly elected from the part A tribal areas and such other members as the president may notify for the purpose. The bills introduced in the assembly may be considered by this committee in the assembly from the point of view of the people living in these areas.

In India due to inequality of states and of regions within the state was creating dissatisfaction. Asymmetric federalism and special provisions have helped solving these problems.