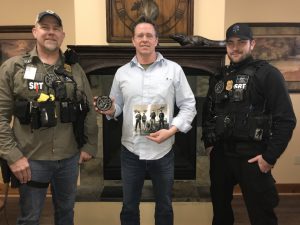 Simply put, Bail Enforcement refers to “enforcing” the agreement of a defendant to return to court and appear before a judge in a criminal case where bail has been implemented. Many people assume this is the main job of a bail bondsman, but for the most part, bondsmen get defendants out of jail. Nationally, it is estimated that 98% of defendants on a bail bond return to court as promised. Thus, a bondsman has little need to perform bail enforcement per se.

When a bail bondsman is unsuccessful in tracking down a fugitive, a lengthy process may occur. The bondsman will be responsible for paying the court the full amount of the forfeited bail. Most likely, the bail bondsman will use their capital to pay for this rather than relying on the underwriting insurance company or “surety” as it is known. After the bond is revoked and paid by the bondsman, he will then seek the co-signer of the bail bond out for payment on the full bond.

If the bond involved collateral, such as a property bond, the bondsman will seek the property that was in the contract necessary to pay for the skipped bail and foreclosure will proceed if necessary.