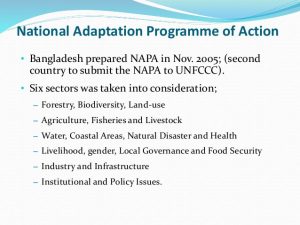 National Adaptation Programmes of Action (NAPAs) provide a process for Least Developed Countries (LDCs) to identify priority activities that respond to their urgent and immediate needs to adapt to climate change – those for which further delay would increase vulnerability and/or costs at a later stage.

To date, UNDP has supported 31 countries in preparing and submitting their National Adaptation Programme of Action (NAPA) to the UNFCCC, with financing from the LDCF.

The UNDP publication, Water Adaptation in National Adaptation Programmes for Action, published January 2009, details some of the work in the NAPA process on integrating climate adaptation in freshwater planning.

NAPAs provide a process for the LDCs to identify priority activities that respond to their urgent and immediate needs with regard to adaptation to climate change – those needs for which further delay could increase vulnerability or lead to increased costs at a later stage. The rationale for NAPAs rests on the limited ability of the LDCs to adapt to the adverse effects of climate change. In the NAPA process, prominence is given to community-level input as an important source of information, recognizing that grassroots communities are the main stakeholders. NAPAs use existing information and no new research is needed. They are action-oriented, country-driven, are flexible and based on national circumstances. To effectively address urgent and immediate adaptation needs, NAPA documents are presented in a simple format, easily understood both by policy-level decision-makers and the public.

As a response to the decision of the Seventh Session of the Conference of the Parties.  The preparation process was guided by the a high powered Project Steering Committee headed by the Secretary, Ministry of Environment and Forests and members from other key ministries, departments and agencies including Ministry of Finance and Planning.

The NAPA highlighted three impact associated with climate change: Rise in sea, level, changing patterns in rainfall, and increase in frequency and intensity of extreme events such as floods and tropical cyclone. The document recommended 15 projects for ‘immediate and urgent implementation’ arguing that any delay in implementation would increase vulnerability and/ or increase adaptation costs later.

As NAPA only addressed only immediate and urgent Adaptation Activities, it could not address the overall requirement of the adaptation activities of the country. Under this Backdrop Bangladesh took the initiative to prepare Bangladesh Climate Change Strategy and Action Plan (BCCSAP). In 2009 Bangladesh prepared the BCCSAP having six thematic areas to address her vulnerabilities in different sectors.

Following the massive destruction caused by cyclone SIDR in 2007, the United Kingdom (UK) Government evinced its interest to support Bangladesh in climate change adaptation. To discuss the impacts of climate change and shed light on the current challenges, in March 2008, the 1st “Bangladesh-UK Climate Change Conference” held in Dhaka. In this conference, representatives from International Financial Institutions (IFIs) and developed partners (DPs) said explicitly that helping Bangladesh on climate change-related issues is on their list of priorities. And, in this relation, they would consider creation of a “Multi-Donor Trust Fund (MDTF)” for Bangladesh to support climate change adaptation and mitigation actions.

But, the challenge was how to scale up such investment under MDTF. Recognizing this need, Bangladesh prepared its  which was launched in the 2nd UK-Bangladesh Climate Conference, held in London on 10 September 2008. Following the establishment of current democratic government in Bangladesh in December 2008, the ‘Climate Change Strategy and Action Plan’ (BCCSAP) further put to expert review and an updated version of the same was published in 2009.

The fundamental objective of the BCC MDTF is to support implementation of Bangladesh’s Climate Change Strategy and Action Plan, BCCSAP, a ten-year program (2009-2018) as well as implementation of similar activities that would be aimed at building the capacity and resilience of the country to meet the challenge of climate change. This is to be noted that the BCCSAP aims to build a climate resilient society and economy in Bangladesh through adaptation to the climate change as well as mitigation following a low carbon development path.

BCCSAP identified 44 programme areas under which diversified projects can be undertaken in different vulnerable sectors of the country. BCCSAP is a living document, which requires US$5 billion (10 billion) during the first five years.

The BCC MDTF will finance activities designed to achieve the BCCSAP’s goals and support one or more of the BCCSAP’s themes; these are-

Activities related to further strengthening of comprehensive disaster management systems to deal with the increasingly frequent and severe natural catastrophes as a result of climate change.

Undertake activities to ensure that existing infrastructure is well maintained and fit for purpose and put in place urgently needed infrastructure to deal with the likely short and medium-term impacts of climate change.

Carrying out of a series of activities to estimate the likely scale and timing of climate change impacts on different sectors of the economy in order to inform planning of future investment strategies.

Carrying out of a series of activities to reduce Bangladesh’s carbon emission, now and in the future.

Carrying out of a series of activities to strengthen the capacity of Bangladesh’s government ministries and agencies, civil society and the private sector.

The government signed a Memorandum of Understanding with four EU member countries and the European Commission to set up the Multi Donor Trust Fund (now named as Bangladesh Climate Change Resilience Fund) of $110 million for the implementation of BCCSAP. But the debate on the involvement of the World Bank as an independent trustee on the management and governance as well as government’s strive to establish country’s sovereign and democratic ownership over the management of any climate fund delayed the whole process of BCCSAP implementation. Therefore lack of adequate financing both from multilateral and bi-lateral funding mechanism delaying the implementation of BCCSAP.

The uncertainty and inadequacy of finance from the multilateral mechanisms as well as complicacy of accessing to the funds from the bi-lateral sources provoked the Government of Bangladesh to finance climate change adaptation initiatives from its own revenue income. , In  with an initial capitalization of 3 billion takas  ($45 million) from its budget to support projects on climate change adaptation and mitigation as identified in the BCCSAP to be managed by the MoEF. In 2010, the government ramped up its contribution to this fund and so far contributed US$ 200 million over the last two fiscal years to implement both adaptation and mitigation activities based on the BCCSAP. Government has approved 34 government projects of various Ministries and Agencies, which is under various stages of implementation. Government has also approved 28 NGO projects recently.

Meantime, to ensure proper utilization and management of Climate Change Trust Fund (CCTF) for the implementation of BCCSAP 2009, the government established a Trustee Board which comprises with 17 members (Annex 1 and 2). Under the chairmanship of the Minister/State Minister of the ministry Environment and Forest to the Trust the secretary of the same ministry will serve as the member secretary. The non-government members, 2 out of 17, will serve the Trust for three year period but there is no specified life-span of the other Trust members as well as the Trust itself.

Under the Climate Change Trust Fund the Ministry of Environment and Forest finalized setting-up of a separate unit ‘Climate Change Unit-CCU’ which is made responsible for ensuring efficient implementation of the projects/programmes undertaken by other ministries, departments and NGOs. Meanwhile, an additional secretary has been appointed to lead the CCU.  Staff members of the CCU also will serve as the member of ‘technical committee’ who will assist the Trustee Board in selecting appropriate project proposal for implementation.