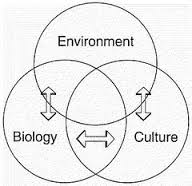 Characteristic human biological or biobehavioral features, such as a large frontal cortex and intensive parenting compared to other primates, are viewed in part as an adaption to the complex social relations created by culture.

Culture shapes the political economy, thereby influencing what resources are available to individuals to feed and shelter themselves, protect themselves from disease, and otherwise maintain their health.

Culture shapes the way people think about the world, altering their biology by influencing their behavior or more directly through psychosomatic effects.

Other anthropologists, both biological and cultural, have criticized the biocultural synthesis, generally as part of a broader critique of “four-field holism” in U.S. anthropology Typically such criticisms rest on the belief that biocultural anthropology imposes holism upon the biological and cultural subfields without adding value, or even destructively. For instance, contributors in the edited volume Unwrapping the Sacred Bundle: Reflections on the Disciplining of Anthropology argued that the bicultural synthesis, and anthropological holism more generally, are artifacts from 19th century social evolutionary thought that inappropriately impose scientific positivism upon cultural anthropology.

Some departments of anthropology have fully split, usually dividing scientific from humanistic anthropologists, such as Stanford’s highly publicized 1998 division into departments of “Cultural and Social Anthropology” and “Anthropological Sciences.” Underscoring the continuing controversy, this split is now being reversed over the objections of some faculty. Other departments, such as at Harvard, have distinct biological and socio cultural anthropology “wings” not designed to foster cross sub disciplinary interchange.