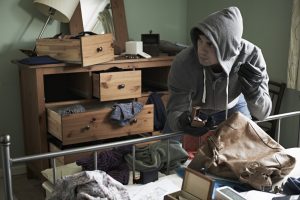 Burglar Stealing Items From Bedroom During Hose Break In

Burglary, also referred to as breaking and entering, is considered a serious crime in Florida. Although usually not considered with the same severity as robbery in many cases, it is still an illegal act that comes with harsh potential consequences, in the form of both prison time and costly fines.

Acknowledging the fact that a burglary charge can negatively affect your life in many ways, not the least of which is your professional status, knowing the details of the law, along with the penalties involved, should allow you to approach this situation in an informed and efficient manner. Having a strong defense strategy developed in conjunction with a criminal defense attorney will give you a better opportunity to refute the charges and get them reduced or possibly dismissed.

According to Florida Statute § 810.02, burglary is defined as entering or remaining in a dwelling, a structure, or a conveyance with the intent to commit an offense. This includes both unlawful AND lawful entering.

Unlawful is self-explanatory, but lawful entering of a dwelling, structure or conveyance can become a burglary charge if the offender remains inside, either:

When a burglary occurs without being armed with a dangerous weapon or explosive, and without an assault or battery action, the standard charge will be that of a Felony of the Second Degree.

An individual will be charged with a Felony of the First Degree if, during the course of a burglary, the offender:

(1) Uses a motor vehicle as an instrumentality, other than merely as a getaway vehicle, to assist in committing the offense, and thereby damages the dwelling or structure; or

For those dealing with a burglary accusation, there are defense options that others have used in order to reduce of dismiss the charges. Consent can be used as an affirmative defense to the crime. A defendant has the burden of proof to offer evidence of consent. Once the evidence of consent in presented, the prosecutor must disprove the consent to enter “beyond a reasonable doubt.”

Additionally, a lack of intent to commit a crime is also a viable option. This strategy can be implemented if the defense can prove that the alleged offender had lawful reason to enter an establishment, such as getting out of the rain or finding a place to sleep. A person cannot be convicted of burglary in situations like this because it must be proven that there was intent to commit a crime inside of the dwelling, structure or conveyance in question.