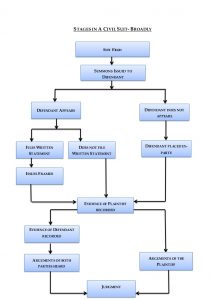 In general terms, a civil lawsuit is the court-based process through which Person A can seek to hold Person B liable for some type of harm or wrongful act. Usually, if Person A is successful, he or she will usually be awarded compensation for the harm that resulted from Person B’s action or inaction. (Note: civil lawsuits can also be brought by and against businesses and other entities).

So, a civil lawsuit can be brought over a contract dispute, a residential eviction after a broken lease, injuries sustained in a car accident, or countless other harms or disputes.

Unlike a criminal case, which is looking to punish the wrongdoer for a crime, a civil case is meant to compensate the person who was harmed (usually in the form of monetary “damages” paid from the defendant to the plaintiff).

A civil lawsuit can seem complex and, for most of us, confusing. If you are involved in a civil lawsuit, you shouldn’t feel discouraged by the various steps or the legal jargon. Civil lawsuits aren’t actually too hard to wrap your head around once you understand the steps and some of the terminology.

We broke down the basic steps of the civil lawsuit process to help our clients better understand what exactly is going on with their lawsuit.

A civil lawsuit, which is sometimes also called civil litigation, is a lawsuit based on non-criminal statutes, meaning it is a separate entity from a criminal proceeding. A civil lawsuit is a dispute that is handled legally by the courts, such as a personal injury lawsuit. Civil lawsuits commonly involve individuals, groups of people, people and businesses, or other entities.

A civil lawsuit can range from a small claim, such as a fender bender, to major multidistrict litigation involving thousands of individuals.

Steps in a Civil Lawsuit

Civil litigation goes through specific steps – or proceedings. First and foremost, you should consult with potential representatives for legal advice. Before anything else, it is important that you consult with an attorney about your potential lawsuit. You need to be sure that you have a valid case so that you do not waste your own time and resources filing a case that is unlikely to be successful or a case that is unlikely to make it to trial. An experienced civil lawyer will help you to determine the strength of your case.

After an initial consultation, your civil lawsuit case will follow four common steps

The pleadings are the initial step in the civil lawsuit. Each side, or party, will file paperwork, in the right court, to explain their side of the story. The person bringing on the lawsuit, or plaintiff, will file a complaint. The person being alleged of wrongdoing, or defendant, will file an answer.

Choosing an appropriate location for your lawsuit requires legal analyses and knowledge of the relevant rules for the courts in your area. This step should be taken with an attorney. You and your attorney must find a court that fits multiple criteria before filing your case. The court must have personal jurisdiction over the defendants involved, subject matter jurisdiction over your case-type, and it must be located in the appropriate venue.

After choosing the appropriate court for your case, your attorney will draft the complaint. Once the initial complaint is filed, the civil lawsuit is legally underway.

What is a Complaint?

What is an Answer?

The answer is just that – an answer. The answer is a response to the plaintiff’s complaint. The answer details the defendant’s description of the events that lead to the dispute, outlining any inaccuracies or falsehoods that they find in the complaint.

The defendant has a limited amount of time to file an answer.

The plaintiff will sometimes file a response to the answer or counter-claim in the form of a reply.

As a response to replies, or in the instance that one party requests clarification over legal theories or allegations in the other party’s pleadings, a complaint or answer may be amended.

A party can ask that a specific part of any pleadings also be dismissed by the court, in which cases, a pleading would also be amended.

Discovery is generally the longest part of the civil litigation process. Discovery begins after all pleadings have been filed and do not end until shortly before the trial.

Each party will obtain information through demands for production of documents, depositions of parties and witnesses, written interrogatories (questions and answers written under oath), written requests for admissions of fact, an examination of the scene, and the petitions and motions employed to enforce discovery rights.

Parties may also use expert witnesses to gain knowledge about the case during discovery. Expert witnesses are brought in to validate arguments and testify on behalf of a party’s claim.

Before the trial begins, either during the discovery process or shortly after, parties may use motions to ask the court to rule or act. The motion can be a request to amend or dismiss part of the case, question legal basis or languages used by the other party, or clarification of certain issues in the lawsuit.

After discovery has ended, if the dispute is not resolved out of court, the civil lawsuit will move to trial.

Before the trial begins, both parties will submit a brief to the judge. A brief is a document which outlines the party’s argument as well as any evidence that the party will present during the trial.

At the trial, both the plaintiff and the defense will present their arguments to either a judge or jury. Trials involving a judge and no jury are referred to as bench trials. If the trial is set to be decided by a jury, both parties help make juror selections through a pre-trial process of potential-juror interviews called a voir dire.

Each party will present its cases using evidence, which can include documents, expert testimony, or exhibits that support its argument. Witnesses may be called to the stand for questioning. After a witness is examined by one party, the opposing party can choose to cross-examine the witness.

Once each party has had an opportunity to present its case, both will make a closing argument.

In a jury trial, after closing arguments, the judge instructs the jury on the legal basis that it should apply to the evidence. The jury deliberates for a period of time until a verdict is reached.

In a bench trial, the judge deliberates for a period of time until a decision or verdict is reached.

After Verdict has been Made

If a party does not agree with the result of the trial, they can appeal the decision. If a decision is appealed, then the civil lawsuit is presented to an appellate court that reviews the previous proceedings of the lawsuit. Each party will submit a brief and a record of evidence from trial to the appellate court. The appellate court looks for any errors in legality made during the pre-trial or trial proceedings.

Civil court differs from criminal court in a number of key ways.

Civil Suits Can Be Brought By Anyone. A civil case is usually instigated by a private party—a person or business who has allegedly suffered some kind of harm or damage. In contrast, a criminal case is brought by a prosecutor or other attorney representing the local government.

The Burden of Proof is “Lighter” in a Civil Case. The “burden of proof” in a civil case—what must be shown in order for the defendant to be held liable for what the plaintiff is alleging—is “by a preponderance of the evidence,” meaning it is more likely than not that what the plaintiff is alleging is what actually happened. In a criminal case, the government must show the defendant’s guilt “beyond a reasonable doubt,” which is a much tougher standard to meet.

The Loser in a Civil Case Typically Pays in Dollars Rather Than in Time Behind Bars. What’s at stake in a civil lawsuit can usually be measured in money. The plaintiff is asking the court to make a judgment in the plaintiff’s favor, and if such a judgment is made it is usually accompanied by a court order entitling the plaintiff to a certain amount of money (called a damages award) to be paid by the defendant. Compare that to a criminal case, where if the defendant is convicted of a crime, he or she is usually facing the prospect of jail time, probation, the payment of a fine, compelled performance of community service, or some combination of these.

Personal Injury Lawsuits Are One Type of Civil Suit