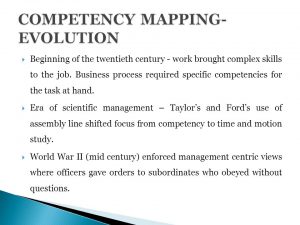 In the United States criminal justice system, a competency evaluation is an assessment of the ability of a defendant to understand and rationally participate in a court process.

Competency was originally established by the Supreme Court of the United States as the evaluation of a defendant’s competence to proceed to trial. In a subsequent ruling, the Court held that any prisoner facing the death penalty must be evaluated as competent to be executed, meaning that he must be capable of understanding why he has received the death penalty and the effect that the penalty will have. In further rulings, competence was also enlarged to include evaluation of the defendant’s competence to plead guilty and competence to waive the right to counsel.

The American Bar Association’s Criminal Justice Mental Health Standards stated in 1994 that the issue of a defendant’s current mental incompetence is the single most important issue in the criminal mental health field, noting that an estimated 24,000 to 60,000 forensic evaluations of a criminal defendant’s competency to stand trial were performed every year in the United States. A 1973 estimate put the number of competence evaluations at 25,000 to 36,000 each year. There are indications that the number of evaluations of criminal defendants is rising. One comparison of estimates between 1983 and 2004 suggest the annual number rose from 50,000 to 60,000 criminal competency evaluations respectively.

This standard is based on the Supreme Court decision Dusky v. United States in which the Court affirmed a defendant’s right to have a competency evaluation before proceeding to trial. Competence to proceed was defined by the court as the defendant’s ability to consult rationally with an attorney to aid in his own defense and to have a rational and factual understanding of the charges.

In this case Dusky presented a petition of writ of certiorari to the Supreme Court requesting that his conviction be reversed on the grounds that he was not competent to stand trial at the time of the proceeding. The court decided to grant the writ, based on a lack of recent evidence that the petitioner was competent at the time of the trial. The case was remanded to the district court for a new hearing to evaluate Dusky’s competence to stand trial, and for a new trial if he was found competent.

The case set the current standard for adjudicative competency in the United States. Although the statutes addressing competency vary from state to state in the United States, the two elements outlined in the Dusky v. United States decision are held in common. The defendant must understand the charges and have the ability to aid his attorney in his own defense.

Competency to stand trial is generally determined via a pretrial evaluation of the defendant’s overall mental status and mental state at the time of the examination. This evaluation aims to provide sufficient information to allow a judge to rule on the competency of the defendant should a motion to that effect be made by either the prosecutor or defense attorney. A judge may also directly rule a defendant incompetent to stand trial without receiving a motion to that effect from counsel.

Who is deemed qualified to conduct a competency evaluation varies from state to state. Originally competency evaluations included a range of tests and assessments. Recently the tendency is to simplify the process by relying upon an interview and, optionally, a psychological evaluation. There are a number of standardized screening devices that also may be employed.

Competence to be executed

An additional evaluation is of the competence to be executed, that is the defendant must be capable of understanding why he is being executed and the effect execution will have.

The right to be competent to be executed resulted from the outcome of a United States Supreme Court case, Ford v. Wainwright, in which a Florida inmate on death row took his case to the United States Supreme Court, declaring he was not competent to be executed. He had been evaluated as incompetent but the Governor of Florida made an executive branch decision and signed the death warrant anyway. The court ruled that a forensic professional must make that evaluation and, if the inmate is found incompetent, provide treatment to aid in the inmate gaining competency in order that the execution can take place.

Providing treatment to an individual to enable that person to become competent to be executed places mental health professionals in an ethical dilemma. The National Medical Association takes the position that ethically it is a physician’s duty to provide treatment, regardless of the patient’s legal situation. Others feel that it unethical to treat a person in order to execute them. Most restorations of competency are accomplished through psychiatric medication.

It has been estimated that approximately 90 percent of all criminal cases in the United States are settled through guilty pleas, rather than a trial.

In United States v. Binion malingering or feigning illness during a competency evaluation was held to be obstruction of justice and led to an increased sentence.

In United States v. Morin the United States Court of Appeals, Eighth Circuit upheld the defendant’s conviction. The court rejected Mr. Morin’s argument, among others, that the district court violated his due process rights by refusing to allow him to waive competency at trial. The court held that since his competency to stand trial was never challenged, the issue of whether he was entitled to waive competency to stand trial was properly not considered.

Although Dusky v. United States affirmed the right to a competency evaluation, the specifics of the evaluation remain ambiguous. Each evaluator must decide what is meant by “sufficient present ability” and “has a rational as well as a factual understanding” as set forth in the Dusky decision. One common principle is clear in forensic evaluations, however. Forensic evaluators cannot reach a finding independent of the facts of the case at hand.