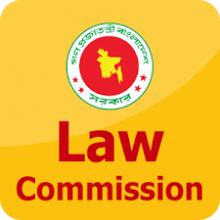 Bangladesh Law Commission is an independent body, set up through an act passed in the national parliament that reviews laws and recommends reforms when necessary in Bangladesh and is located in Dhaka, Bangladesh.[1][2] Former chief justice A. B. M. Khairul Haque is the present chairman of the commission.

The Government felt it necessary to make the Commission a permanent one under a regular statute.There has a number of temporary law commissions in the history of Bangladesh, the first one being set up in 1974. On 9 September 1996 the first permanent law commission was constituted. The first chairman of the commission was Fazle Kaderi Mohammad Abdul Munim, a former chief justice of Bangladesh. In 2016 it drafted the Liberation War Denial Crimes Act, 2016 which made denying war crimes in the Bangladesh Liberation war a crime.

Composition of the Law Commission

As per section 5 of the Law Commission Act, 1996, the Commission consists of a Chairman and two Members. Under the law the Government has got the power to increase the number of its Members, if it deems necessary. The Chairman and Members of the Commission hold their respective offices for a term of three years from the date of their respective appointments. The Chairman or a Member may be re appointed by the Government for the prescribed term after the expiry of the said term. From the very beginning the Chairman of the Commission has been appointed from amongst the retired Chief Justices of Bangladesh(present chairman of Bangladesh Law commission is Mr. Justice Mohammad Abdur Rashid) and Members have been appointed from retired judges of Supreme Court of Bangladesh except on one occasion on which a Member was appointed from amongst legal academics. Very recently another Member from the legal academics is appointed in the Commission. The Commission is presently supported by a Secretary, one Principle Research Officer, three Senior Research Officers and one Senior Assistant Secretary. There are also some Ministerial Staff to support administrative works of the Commission.

Posted by bdmw in Local News on 09 7th, 2009 | no responses   . BDMW President – Advocate Rabindra Ghosh along with his colleagues met with Mr. Justice Md. Abdur Rashid – Chairman Law Commission of Bangladesh on 3rd of September, 2009 at his Office-Dhaka Bangladesh: –

A delegation led by Advocate Rabindra Ghosh of BDMW consisting 8 (eight) members met with the Hon’ble Chairman of Bangladesh Law Commission Mr. Justice Md. Abdur Rashid and his associates on some important Agenda with a recommendation to enact appropriate laws for Minorities: The delegation consists of:

The following agenda was discussed with recommendation for enactment of law:-

The discussion with the Hon’ble Chairman of Law Commission of Bangladesh was fruitful and amiable. The law Commission Chairman assued us that no law will be framed and amended without consultation with Minority Communities of Bangladesh.

Present Strength of the Commission :

Proposed Strength of the Commission:

Functions of the Law Commission

To identify the causes of delay of civil and criminal cases in various courts and with a view to accelerate their disposal and ensure justice as quickly as possible:

(1) To recommend amendment of laws concerned or enactment appropriate cases after examination;

(3) To recommend training and other measures for the improvement of the efficiency of the persons involved with the judicial system such as judicial officers, staff, law offers and lawyers,

(4) To recommend necessary measures for improvement of the entire judicial system and specially to prevent the abuse of the application of the laws concerned:

(5) To recommend modernization of different aspects of court management, such as, distribution of works among judges, supply of copies, transmission and preservation of records, service of notices and other relevant matters;

(a) To recommend, an acceptable measure regarding the feasibility of introducing a more efficient and accountable system in place of the present system for conducting the various government cases properly and establishing a separate investigating agency for the investigation of the criminal cases;

(1) To recommend amendment of relevant laws including company law or legislation of new law in appropriate cases in order to create competitive atmosphere in the field of trade and industry and to avoid monopoly;

(2) To recommend, after examination, measures with regard to relevant laws especially copyright, trademarks, patents, arbitration, contract, registration and similar other matters;

(3) To recommend necessary measures for the establishment of separate courts for disposal of cases arising out of commercial and bank loan matters;

(c) To recommend necessary and timely amendments and reforms of the existing electoral laws administered by the Bangladesh Election Commission;

(d) To recommend, after examination, necessary reforms of the existing laws and enactment of new laws in appropriate cases, in order to safeguard the rights of women and children and prevent repression of women;

(e) To recommend reforms of existing laws, enactment of new laws in appropriate cases and taking of other acceptable measures for the proper implementation of legal- aid programs;

(g) To recommend repeal of existing laws which are inconsistent with the fundamental rights and in appropriate cases making amendments with regard thereto;

(h) To recommend, after identification repeal of obsolete and unnecessary laws and in case of necessity, legislation of laws on any subject;

(j)’To recommend with regard to other legal matters referred by the government from time to time.

On the basis of Section 6A of the Law Commission Act 1996, the Commission prepares a work plan for each two-year on the conduct of its affairs in which laws are taken on priority basis for review. The said plan is sent to the Government. The Government sends its opinion/recommendations if any on the work plan.

The Commission after considering the opinion/recommendations made by the Government finalizes the work plan and informs the Government. The Commission in its meeting discusses the priorities of laws of the work plan and reference if any, made by the Government.  In the Commission’s meeting each member is assigned to prepare a working paper/report with the assistance of a Research Officer. Then the Research team considering the nature and scope of the research of the law adopts different methodologies for collection of data and in appropriate cases studies foreign system of law to see how they meet similar problems. The team in the working paper delineates different deficiencies and drawbacks of the law and suggests provisional recommendations regarding removal thereof. The working paper prepared by the team is placed before the Commission for consideration and approval. After approval the paper is widely circulated among the different stakeholders for comments and suggestions. The team scrutinizes different views received from the stakeholders and thereafter the Commission prepares final report and draft bill if necessary, and sends them to the government for necessary action. In addition to the work plan the Commission also works and recommends on the matters referred by the government from time to time.