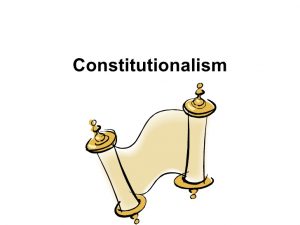 Constitutionalism is “a complex of ideas, attitudes, and patterns of behavior elaborating the principle that the authority of government derives from and is limited by a body of fundamental law”.

Political organisations are constitutional to the extent that they “contain institutionalized mechanisms of power control for the protection of the interests and liberties of the citizenry, including those that may be in the minority”. As described by political scientist and constitutional scholar David Fellman:

Constitutionalism is descriptive of a complicated concept, deeply embedded in historical experience, which subjects the officials who exercise governmental powers to the limitations of a higher law. Constitutionalism proclaims the desirability of the rule of law as opposed to rule by the arbitrary judgment or mere fiat of public officials…. Throughout the literature dealing with modern public law and the foundations of statecraft the central element of the concept of constitutionalism is that in political society government officials are not free to do anything they please in any manner they choose; they are bound to observe both the limitations on power and the procedures which are set out in the supreme, constitutional law of the community. It may therefore be said that the touchstone of constitutionalism is the concept of limited government under a higher law.

One example of constitutionalism’s descriptive use is law professor Bernard Schwartz’s five volume compilation of sources seeking to trace the origins of the U.S. Bill of Rights. Beginning with English antecedents going back to Magna Carta (1215), Schwartz explores the presence and development of ideas of individual freedoms and privileges through colonial charters and legal understandings. Then in carrying the story forward, he identifies revolutionary declarations and constitutions, documents and judicial decisions of the Confederation period and the formation of the federal Constitution. Finally, he turns to the debates over the federal Constitution’s ratification that ultimately provided mounting pressure for a federal bill of rights. While hardly presenting a straight line, the account illustrates the historical struggle to recognize and enshrine constitutional rights and principles in a constitutional order.

In contrast to describing what constitutions are, a prescriptive approach addresses what a constitution should be. As presented by Canadian philosopher Wil Waluchow, constitutionalism embodies “the idea… that government can and should be legally limited in its powers, and that its authority depends on its observing these limitations. This idea brings with it a host of vexing questions of interest not only to legal scholars, but to anyone keen to explore the legal and philosophical foundations of the state.” One example of this prescriptive approach was the project of the National Municipal League to develop a model state constitution.