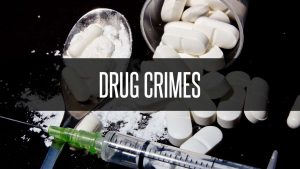 A drug-related crime is a crime to possess, manufacture, or distribute drugs classified as having a potential for abuse (such as cocaine, heroin, morphine and amphetamines). Drugs are also related to crime as drug trafficking and drug production are often controlled by drug cartels, organised crime and gangs.

Drug crimes are a serious offense and, if you have been accused of any level of a drug crime, it is important to talk to an experienced drug crime attorney. The penalties that drug crimes carry can be extremely severe depending on the circumstances that surround the offense, so it is important to speak with an attorney to make sure your case is handled properly, and to try and avoid Federal drug charges. Federal minimum charges are strict, and an attorney can make sure that your rights were respected at each step of the legal process. Drug charges vary depending on the nature of offense. There are penalties for possession, possession of paraphernalia, drug trafficking, drug manufacturing, and the sale or the transportation of illegal drugs. There are also immediate consequences if police discovered any of these circumstances within 1,000 feet of a “drug free zone.” Drug free zones are usually areas that are populated by children, such as a school, a playground, or a day-care facility. In addition, if a child was present for the sale, manufacture, or transportation of illegal drugs, the severity of the consequences for these actions increase automatically.

If you are facing a possession charge, the type of drug and the amount of the drug you have on you at the time of your arrest play a large deciding role in the charges brought against you. For example, in Texas, marijuana will be considered a misdemeanor if a person is caught carrying less than four ounces. If a person is caught carrying more than four ounces of marijuana, the charge can become a felony. If there is intent to sell or distribute the marijuana, the penalties will be greater. Furthermore, if a minor is present, again, the penalties will be enhanced. If you are in possession of a drug other than marijuana, many times the charge begins at felony, instead of misdemeanor even if you are in possession of less than a gram. As you can see, there are many different variables surrounding drug crime charges, and an attorney might play a vital role in your release, or reduced sentence.

Drug abuse and addiction is associated with drug-related crimes. In the U.S. several jurisdictions have reported that benzodiazepine misuse by criminal detainees has surpassed that of opiates. Patients reporting to two emergency rooms in Canada with violence-related injuries were most often found to be intoxicated with alcohol and were significantly more likely to test positive for benzodiazepines (most commonly temazepam) than other groups of individuals, whereas other drugs were found to be insignificant in relation to violent injuries.

Research carried out on drug-related crime found that drug misuse is associated with various crimes that are in part related to the feelings of invincibility, which can become particularly pronounced with abuse. Problematic crimes associated include shoplifting, property crime, drug dealing, violence and aggression and driving whilst intoxicated. In Scotland among the 71% of suspected criminals testing positive for controlled drugs at the time of their arrest benzodiazepines (over 85% are temazepam cases) are detected more frequently than opiates and are second only to cannabis, which is the most frequently detected drug.

Benzodiazepines have been used as a tool of murder by serial killers, and other murderers, such as those with the condition Munchausen Syndrome by Proxy. Benzodiazepines have also been used to facilitate rape or robbery crimes, and benzodiazepine dependence has been linked to shoplifting due to the fugue state induced by the chronic use of the drug. When benzodiazepines are used for criminal purposes against a victim they are often mixed with food or drink.

Temazepam and midazolam are the most common benzodiazepines used to facilitate date rape. Alprazolam has been abused for the purpose of carrying out acts of incest and for the corruption of adolescent girls.However, alcohol remains the most common drug involved in cases of drug rape. Although benzodiazepines and ethanol are the most frequent drugs used in sexual assaults, GHB is another potential date rape drug that has received increased media focus.

Some benzodiazepines are more associated with crime than others especially when abused or taken in combination with alcohol. The potent benzodiazepine flunitrazepam (Rohypnol), which has strong amnesia-producing effects can cause abusers to become ruthless and also cause feelings of being invincible. This has led to some acts of extreme violence to others, often leaving abusers with no recollection of what they have done in their drug-induced state. It has been proposed that criminal and violent acts brought on by benzodiazepine abuse may be related to lowered serotonin levels via enhanced GABAergic effects.

Flunitrazepam has been implicated as the cause of one serial killer’s violent rampage, triggering off extreme aggression with anterograde amnesia. A study on forensic psychiatric patients who had abused flunitrazepam at the time of their crimes found that the patients displayed extreme violence, lacked the ability to think clearly, and experienced a loss of empathy for their victims while under the influence of flunitrazepam, and it was found that the abuse of alcohol or other drugs in combination with flunitrazepam compounded the problem. Their behaviour under the influence of flunitrazepam was in contrast to their normal psychological state.

The concept of drug-related crime has been criticized for being too blunt, especially in its failure to distinguish between three types of crime associated with drugs:

Drug-related crime may be used as a justification for prohibition, but, in the case of system-related crime, the acts are only crimes because of prohibition. In addition, some consider even user-related and economic-related aspects of crime as symptomatic of a broader problem.