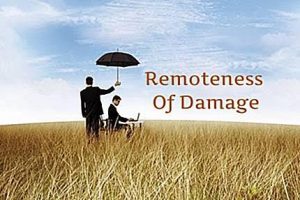 We have already looked at causation, and the relevant factors, such as intervening acts and multiple causes. We said then that remoteness of damage came into those situations.

The general principle here is that the damage cannot be too remote from the actual breach of duty. We are looking for consequences that could be in the reasonable contemplation of the defendant.

HELD. Following the principles laid down in Polemis, the defendants were liable

PRIVY COUNCIL. Not liable, as reasonable man could not possibly have foreseen the wharf would be damaged in this way, as a result of the defendant’s act. All the issues such as the flashpoint, were taken into account. Polemis declared as no longer good law. NARROW APPROACH

We can clearly see from both of these cases that the issue of reasonable foreseeability is an issue. Were the consequences of the damage within the reasonable contemplation of the claimants. In Polemis the damage incurred was probably the furthest thing from the Defendant’s mind, which is why it is bad law. In Wagon Mound the correct approach was used, and the Defendants were therefore not liable for an indeterminate amount of events.

The pattern that is emerging is that the defendant will not be held liable for an indeterminate event for an indeterminate time. There has to be a limit. It seems that if the type of damage would be foreseeable, then liability will be imposed, whether or not the chain of events leading to it were foreseen or not.

COA. No knowledge that the lid falling would cause a chemical reaction, so explosion not foreseeable. Only risk was splashing. They did distinguish Hughes and the Wagon Mound

Harman LJ ‘in my opinion, the damage here was of an entirely different kind from the foreseeable splash’

Other issues here were that no-one thought the lid was dangerous (hardboard), and two people even went to look into the cauldron to see where it had gone! Issue was that no damage was really foreseeable from the lid falling, and the splash.

Claimant worked on a farm, which had become over-run by rats. His main job was to look after cattle. He contracted a rare disease ‘weil’s’ caused by rat’s urine.

Held. Payne J. ‘this is my view is entirely different in kind from the effect of a rat bite or food poisoning from consuming food infected by the rats’

Therefore, the damage was too remote. The disease was not foreseeable.

Remember, we are looking for a type of foreseeable damage, and bites would be possible but not this disease. Harsh law again.

The claimant had to drive his fan from Bradford to Exeter (500 miles) in January. His heater didn’t work, and his window was stuck open. He got frostbite.

Held. Frostbite is a common and foreseeable injury from prolonged exposure to extreme cold.

The claimant injured his head at work due to the Defendant’s negligence. Some years later he hanged himself as he was suffering from acute anxiety and depression caused by the original injury.

Held. COA. original injury was still operating, and anxiety/depression are a common cause of damage to the head.

A chemical that exploded on contact with water was supplied by the Defendants to the claimants without any warnings on it. One of the claimant’s employees placed the chemical with water, and a massive explosion occurred

Held. Property damage foreseeable as a result of explosions, and the amount was irrelevant. The damage was extensive in this case

The claimant’s property was damaged by the defendant’s negligence. The claimant could not afford to carry out the repairs until he received judgement against the defendant, and by the time he did the cost of repairs had gone up by 300%.

Held. Defendant liable for full cost, as this would have been in his contemplation

One relevant area within remoteness is the eggshell skull principle. Basically, this is the same as in criminal law, in that you must take the claimant as you find him. Therefore, if he has some kind of weakness, you have to accept this.

The claimant burnt his lip due to the defendant’s negligence. He had a pre-cancerous condition which then turned cancerous.

Held. Defendant liable for all his damage

The claimant slipped on a ladder, cutting his shin, due to the defendant’s negligence.

He went to hospital, and was given an anti-tetanus and got brain damage.

The doctor could not have tested for a reaction to tetanus, and the Defendants only wanted to be liable for the damage to the claimant’s shin.

Held. Take the claimant as you find him. The tetanus jab is foreseeable with most injuries, particularly ones where there is dirt or broken skin.

You can also have an eggshell personality.

The claimant was a passenger in a defendant’s car. The defendant had been drinking and caused an accident, injuring the claimant’s head.

The claimant had a personality change, and started attacking and raping women. He had previously been a petty criminal.

He was sent to prison for life, and sued the defendant in negligence, stating that he would not have done these things if it hadn’t been for the head injuries

Held. £60k compensation, taking into account free board and lodgings in prison

The women he attacked then sued him and got compensation. He then tried to recover this from the defendants. Court wouldn’t allow this as this would be indeterminate liability, and not within the reasonable contemplation of the defendants

The claimant suffered from ME. He was involved in a car accident caused by the defendant’s negligence. He hadn’t had problems with ME for years but it came back with a vengeance after the accident. (this case also nervous shock case)

Held. Prior to 1986 his breakdown was not foreseeable but he should have been given extra help, and in not doing so the authority were in breach of their duty. The second breakdown should have been in their reasonable contemplation, as they knew of the first and had not taken steps to reduce his workload.

Claimants were suing for a man who had committed suicide in prison. Prison staff had not been told of his suicidal behaviour. The prisoner was deemed insane, as he was clinically depressed, and therefore authorities liable.

A sane prisoner committed suicide in custody, and again the police knew of his tendencies.

Held. HOL. Lord Hoffman ‘it would make nonsense of the existence of such a duty if the law were to hold that the occurrence of the very act which ought to have been prevented, negatived causal connection between the breach and the death’

The police and prison staff have a duty to prevent suicide, particularly when they are aware of these tendencies.