Home » Law and Ethics » DESERTIFICATION AND ITS SOLUTIONS GIVEN BY LAW 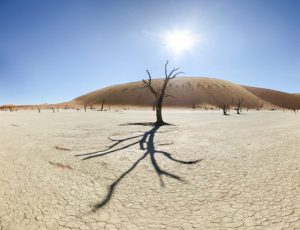 Desertification is a type of land degradation in which a relatively dry area of land becomes a desert, typically losing its bodies of water as well as vegetation and wildlife. It is caused by a variety of factors, such as through climate change(particularly the current global warming) and through the overexploitation of soil through human activity.[4] When deserts appear automatically over the natural course of a planet’s life cycle, then it can be called a natural phenomenon; however, when deserts emerge due to the rampant and unchecked depletion of nutrients in soil that are essential for it to remain arable, then a virtual “soil death” can be spoken of, which traces its cause back to human overexploitation. Desertification is a significant global ecological and environmental problem with far reaching consequences on socio-economic and political conditions.

Effects of desertification have to be curbed. For this, the government has to make the public participate and feel inclined to solve the problem. Make sure that before rehabilitating any land, no other land is destroyed, prevention of non-degraded land is done. Number of animals on land should be decreased to let the plants re-grow. Mulching and reseeding are expensive methods of improving the land. A better way is good land management in semi-arid areas.

The Eden Project, by the Eden Foundation has been started to prevent desertification. The field station of it at Niger is researching different ways of re-vegetating land. Two ways of doing it are direct seeding and natural vegetation. When seeds are sown directly into the soil it is direct seeding. In natural vegetation plants which have grown from seeds are dispersed naturally & are left to mature. These two methods are shown to farmers and are given advice. This sets a good example for other areas like these to regain their valuable land.

The problems given below can be tackled by:-

Land misuse and minimizing the pressure of too many people living in an area would reduce desertification.

U.N. Convention to Combat Desertification says “land degradation in arid, semiarid and sub-humid resulting from various factors, including climatic variations and human activities.” Land degradation is the reduction of the biological productivity of drylands. It affects the livelihoods of a million people including many poor. Here we evaluate as to what are the basic conditions of desertification in dry lands

Desertification occurs in every continent except Antarctica. Its affects are local, national, regional and global. It generally happens worldwide in drylands.41% of earth is dry lands and 2 billion people reside there. It includes terrestrial regions where water does not affect the production of crops. Out of the 41% 10-20% of dry land is already degraded. Based on this 1-6% people live in desert areas. If this remains unchecked desertification and degradation will threaten the human life badly. Thus it is one of the greatest environmental challenges.

Dry lands are threatened a lot by reduction in the provision of ecosystem services as a result of water scarcity, intensive use of services, and climatic change. Freshwater scarcity is a result of climatic change which causes greater stresses in dry land. If untouched this changes into desertification, Sub-Saharan and Central Asian dry lands are most affected by it. In every thirty years severe draughts occur at three key regions of Africa—the Sahel, the Horn of Africa, and Southeast Africa The droughts at these places triple the number of people that are exposed to severe water scarcity which leads to major food and health crises in return.

Main Cause Of Ozone Depletion

There are two very distinctive observations of ozone depletion. One is the slow decline of 4% per decade in total volume of ozone in earth’s ozone layer since late 1970s and second is a large decrease in ozone layer of earth’s Polar Regions also in late 1970s.This is what is referred as ozone hole. Both stratospheric and troposphere ozone depletions are very common.

Both witness catalytic destruction of ozone by atomic chlorine and bromine. These halogen atoms mainly come from photo-dissociation of chlorofluorocarbons known as Freons. They also come from bromofluorocarbons- halons. After being emitted at the surface these compounds are transported to the ozone layer. With the increase in the emission of CFCs and halons, ozone depletion mechanism got strengthened.

When the natural balance between the production and destruction of ozone layer favours destruction, it results to ozone depletion. The main cause of this is the release of chlorine and bromine released from CFCs. Until the discovery of ozone hole over Antarctica in 1985 CFCs were not seriously taken as the main source of ozone depletion.

CFCs are not affected by rains like other chemicals. They can remain in the atmosphere for about 20 to 120 years and do not break down in lower atmosphere that easily. Due to this they get transported to stratosphere where they get broken down by the ultraviolet rays of the sun. This releases free chlorine. Chlorine works majorly in the ozone depletion. With the conversion of ozone into oxygen, chlorine atom gets free to repeat the process to 100,000 times. It results in a reduced level of ozone. Industrial halocarbons contain chlorine and bromine which destroy stratospheric ozone.