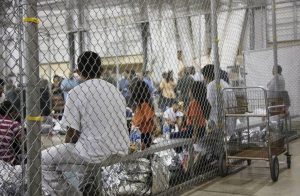 Detention is the process whereby a state or private citizen lawfully holds a person by removing his or her freedom or liberty at that time. This can be due to (pending) criminal charges preferred against the individual pursuant to a prosecution or to protect a person or property. Being detained does not always result in being taken to a particular area (generally called a detention centre), either for interrogation or as punishment for a crime (see prison).

The term can also be used in reference to the holding of property for the same reasons. The process of detainment may or may not have been preceded or followed with an arrest.

Detainee is a term used by certain governments and their armed forces to refer to individuals held in custody, such as those it does not classify and treat as either prisoners of war or suspects in criminal cases. It is used to refer to “any person captured or otherwise detained by an armed force.”[1] More generally, it means “someone held in custody.”[2] The prisoners in Guantánamo Bay are referred to as “detainees”.

Article 9 of the Universal Declaration of Human Rights provides that “[n]o one shall be subjected to arbitrary arrest, detention or exile.” In wars between nations, treatment of detainees is governed by the provisions of the Fourth Geneva Convention.

If the custody officer decides that there is insufficient evidence to charge you, then you must be released. If the custody officer has reasonable grounds for believing that detention without charge is necessary to secure or preserve evidence relating to an offence for which you are under arrest, or to obtain such evidence by questioning you, he or she may order further police detention. The grounds for the detention must be recorded in writing on the custody record. You must be told what these grounds are.

Detention without charge cannot be authorized in your own interest, or to prevent the repetition or continuation of an offence or to authorize police fishing trips as the evidence must relate to an offence for which you are under arrest. If the custody officer has reasonable grounds to believe that you will not answer questions – for example, because your solicitor has said so – detention cannot be extended to obtain evidence by questioning. Detention for questioning in such circumstances may well be unlawful.

Periodic reviews of detention must be carried out for all persons in police custody pending the investigation of an offence. If you have been charged the review is carried out by the custody officer. If you have not been charged it is carried out by an officer of at least the rank of inspector who has not at any stage been directly involved with the investigation. The general rule is that the first review must be not later than six hours after the detention was first authorized, and subsequent reviews must take place at intervals of not more than nine hours.

Before deciding whether to authorize your detention, the review officer must give you (unless you are asleep) and your solicitor or the duty solicitor an opportunity to make oral or written representations. Representations by a solicitor may be made over the telephone. The representations might relate, for example, to the amount of evidence already obtained or to your refusal to answer questions.

An inspector may in certain circumstances, carry out these reviews by telephone or using video-conferencing facilities. You or your representative can make representation, in the appropriate way and records must still be kept.

PACE limits the length of time for which you can remain in police detention. Such limitations are based on the passage of time from a particular point.

There are special rules if the arrest takes place outside England and Wales or in a different police area from the one in which you are questioned. You should not be interviewed except at a police station, unless there are special circumstances, for instance, that a delay may lead to interference with evidence or harm to other people.

The general rule is that you may not be kept in police detention for more than 24 hours without being charged. This period can be extended by a maximum of twelve hours on the authority of an officer of the rank of superintendent or above after giving opportunity for representations to be made. The extension can only be authorized where:

The authorization cannot last beyond 36 hours from when the detention clock began.

You must be released by the end of 36 hours from the starting point, unless an application is made to a Magistrates’ Court sitting in private. The application is made on oath by a police officer and supported by written information, which must state the nature of the offence; the general nature of the evidence for the arrest, what enquiries have been made and are proposed, and the reason for believing the continued detention is necessary.

You are entitled to a copy of the information and to be legally represented- you can have an adjournment to obtain legal representation. The police officer will be at court to be cross-examined and representations may be made to the magistrate(s). These might be directed, for example, towards any delay in the investigation or in making the application, whether there is a serious arrest able offence involved, whether detention is necessary, and whether there is sufficient evidence for you to be charged.

The court may only authorize further detention if:

T he court may authorize further detention for up to 36 hours from the time that the application is granted. A further extension of up to 36 hours may be granted if the same procedure is followed. The total maximum period of detention is 96 hours from the original starting point – except under the Terrorism Act 2000 where the maximum is currently seven days.

After you have been charged, the custody officer must order your release unless one of the following post-charge detention conditions applies:

A person who has been detained after charge must be taken to court as soon as practicable as and not later than the first sitting after charge. The police are also able to impose bail conditions.

The circumstances in which an arrested person may be kept in police detention are set out in PACE. The detention is unlawful unless the provisions of PACE are complied with. A key figure in the scheme is the custody officer, a police officer of at least the rank of sergeant.

Normally, the period of detention without charge should not exceed 24 hours, although in some cases the maximum period, with extensions, is as long as 96 hours. There are a number of stages at which continuation of custody must be authorized, in the early stages by police officers and in the later stages by magistrates. Provision is made for the appointment of custody officers and the performance by them and any other constable in charge of the prisoner of important duties. The custody officer is responsible for ordering your immediate release if he or she becomes aware at any time, perhaps after representations from a solicitor, that the grounds for the detention have ceased to apply and that there are no other grounds for continued detention. Conversely, you may not be released except on the authority of a custody officer at the police station where detention was last authorized. The custody officer is also responsible for keeping a custody record in which all information required to be logged by PACE and the Codes of Practice is recorded. Your solicitor or ‘appropriate adult’ (see later) must be permitted to consult your custody record as soon as practicable after their arrival at the station and at any other time during your detention. You or your legal representative is entitled to a copy of this very important document on leaving police detention or appearing before the court. This entitlement lasts for twelve months after release.