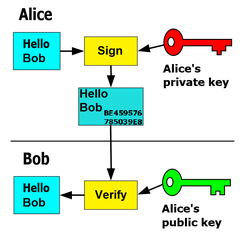 In this example the message is only signed and not encrypted. 1) Alice signs a message with her private key. 2) Bob can verify that Alice sent the message and that the message has not been modified.

Digital signatures are a standard element of most cryptographic protocol suites, and are commonly used for software distribution, financial transactions, contract management software, and in other cases where it is important to detect forgery or tampering.

Digital Signature Is The First Step To Paperless Office

The first idea of using electronic signature backs to 1861 when Morse code was used to send signed agreements by telegraphy. Such agreements were confirmed as enforceable by the New Hampshire Court in 1869.[Howley vs.Whipple 48 N.H.487] :”It makes no difference whether [the telegraph] operator writes the offer or the acceptance in the presence of his principal and by his express direction, with a steel pen an inch long attached to an ordinary penholder, or whether his pen be a copper wire a thousand miles long. In either case the thought is communicated to the paper by the use of the finger resting upon the pen; nor does it make any difference that in one case common record ink is used, while in the other case a more subtle fluid, known as electricity, performs the same office.”

In 1980s many companies start using fax machines for signing time-sensitive agreements. (http://www.isaacbowman.com/the-history-of-electronic-signature-laws) Almost all commercial contracts between distant parties included articles permitted signing documents by fax (and then sending originals by post). But due to technology development and widespread of PC users in 1999-2001 the new era started and many countries enacted several legal acts regarding electronic signatures and documents to provide proper legal framework. In 1999 the European Union adopted EU Directive on Electronic Signatures, in 2000 Bill Clinton signed US ESIGN act, in 2001 Vladimir Putin signed Federal Law “About electronic digital signature” and many other countries has adopted legal acts in this sphere in order to define the liability & validity of electronic signatures and enforce this practice in business world.

Digital signature is considered the most secured at the moment, but it can’t guarantee 100% security. The international standard on information security management is ISO/IEC 27001 (http://www.berr.gov.uk/files/file49952.pdf). On one hand digital signature is more secure then handwritten signature, on other hand due to technology progress soon digital signature could become vulnerable to forgery.

In order to increase security digital signature keys are created by Certified Service Providers (CSPs). CSPs issue special certificates to electronic signatures which certifies the admissibility & reliability of the signature. Usually the CPS are fully controlled by the law. A digital signature which is based on a qualified certificate has strong jurisdiction value. (www.securityfocus.com/infocus/1756)

It is affordable for ordinary people with any PC skills to use digital signatures. The client (the owner of the signature) gets the key store device (e.g. flash memory, touch memory, smart card, etc). In order to sign the prepared electronic document, the owner of the signature inserts key store device into computer, clicks a mouse and the preinstalled digital signature program puts signature into document automatically. What is done by the other user, who verifies signature?. The other user’s program decrypts the message & if the program detects that the message signed is the message which was created when the signature was decrypted, the other user with public key will know that the signed data has not been changed.

Despite the fact that many US states has already created their own local laws regarding electronic commerce & signatures or signed UETA (Uniform Electronic Transactions Act) , on June 30, 2000, US Congress enacted the Electronic Signatures in Global and National Commerce Act (“ESIGN”) in order to facilitate the use of electronic records and signatures in national and foreign commerce by ensuring the validity and legal effect of electronic contracts and to develop a nationwide standard while preserving the ability of states to “modify, limit or supersede” ESign through adoption of UETA

The main provision of ESIGN is to ensure that electronic records, signatures, contracts are not denied legally just because they are in electronic format. http://www.pillsburylaw.com/siteFiles/Publications/DFB1675089CB2C799F50BB06E795BCAB.pdf

ESIGN defines electronic signature as “an electronic sound, symbol, or process, attached to or logically associated with a contract or other record and executed or adopted by a person with the intent to sign the record.”

Chapter 3 regulates the activity of Certifying centers, which issue certificates for digital signatures, and relationships between certified center, owner of the digital signature and the government.

There are two main conditions in this law: both private and public keys should be issued by a certified service provider and the owner of the signature is only a natural person. The law provides clear conditions of digital signature usage

The most interesting issue is that both ESIGN and EU Directive are technology neutral, living space for misunderstanding & adequate freedom.

According to Erkki Liikanen, member of the European commission, responsible for enterprise and the information society, EU and Russian laws are very compatible, but there are two main differences:

“-Both the EU and UNCITRAL have adopted a technologically neutral approach to authentication based on electronic signature rather than the digital signature approach currently adopted by Russia. Although Russia’s choice may be founded on security considerations, we would recommend that further consideration be given to the electronic signature approach which has a wider applicability and potentially a longer validity because of its technological neutrality,

In may 2007 Russia has signed UN convention on the Use of Electronic Communications in International Contracting. The convention came into force in December 2007 & Russia became the tenth country, which allows the international contracts negotiated electronically are valid and enforceable as contracts in hard-copies. The convention is applicable only for international agreements excluding “contracts for personal, family or household purposes” and other particular cases covered in article 2 of the Convention.

There are two ways for parties to exclude usage of the convention: (1) include clause into the agreement, which excludes the application of the convention (2) avoid exchange of information via electronic means.

The convention describes in details how to determine the location of the parties. The main provisions are : (1) the party has the right to determine its location in the contracts, (2) if the location is not stated by the agreement, and party has varies locations, then the place business will be chosen “the closest relationship to the relevant contract”. (www.uncitral.org/pdf/english/text/electcom/ch_X_18.pdf)

There is a high contradiction between local Russian law and UN convention on the Use of Electronic Communications in International Contracting. As the international law supersedes the local laws, but some agreements according to Russian law should be done in hard-copy and should be archived for a long time. The best solution for such situation ( for high value contracts) is usage of electronic digital signatures which are already enforceable in Russia by the Federal Law “ About electronic digital signatures”. If this case the two conditions are in force: (1) there is a prove that documents are authentic (2) the documents could be presented at any time.

Russian society traditionally & historically is very bureaucratic & tends to be suspicious to documents. Despite that the federal law on digital signature was adopted in 2001, we are very far from usage of this system. As far as government & state authorities will not start using electronic digital signatures, the Russian world of business commerce will not use it at full force.

E-documents could tremendously simplify my professional life, but nowadays signing electronic agreement seem to me almost impossible due to the following reasons:

The way I work with our partners, which are located very far, we first sign documents by fax, then we send via post the hard-copy of documents.

But there are very positive trend in electronic documentary area. First of all, Russia has developed a system of electronic governance. This year the e-government will start working at a full force. Secondly, our country has its own cryptographic standards, Russia have own algorithms for creating and verifying digital signatures. Step by step, people will start using electronic documents and I believe in the nearest future

The new double key encryption system, which is used in electronic digital signature, will bring, for sure, new opportunities not only to business but to all spheres of virtual world & e-government services. This system helps to avoid forgeries, speeds up document circulation, saves time and environment, eliminates corruption. Digital signatures could be used everywhere including intra-corporate electronic document circulation, communication with state authorities, in tax reports and internet bank payment system, municipal order bids, etc

However, time doesn’t stand on the same place, the new types of signatures will come up soon. The nearest inventions are digitally encrypted signature (or dynamic signature), which is based on the handwritten signature but digitalized via writing process taking into account dynamic signals (pressure & speed), and biometric signature capturing, the process which attaches to the e-document some biological data of the signatory. So, the main question is e-legislation will be as fast as signature technology?