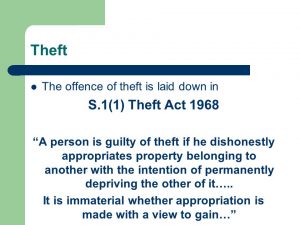 A person steals if he dishonestly appropriates property belonging to another with the intention of permanently depriving the other of it. (2) A person who steals is guilty of theft; and “thief” shall be construed accordingly.

‘A person is guilty of theft if he dishonestly appropriates property belonging to another with the intention of permanently depriving them of it.’

The more obvious situations of theft involve a physical taking; however, appropriation is much wider than this.

‘Any assumption by a person of the rights of an owner amounts to an appropriation and this includes; where he has come by the property (innocently or not) without stealing it, any later assumption of a right to it by keeping or dealing with it as the owner’.

The rights of the owner include:

The defendant had sold furniture belonging to another person. This was held to be an appropriation. The offer to sell was an assumption of the rights of an owner and the appropriation took point at that point. It did not matter whether the furniture was removed from the property or not. Even if the owner was never deprived of the property, the defendant had still appropriated it by assuming the rights of the owner to offer the furniture for sale.

The defendant switched the price labels of 2 items in a supermarket. He then put the lower priced item in his basket; however, he did not go through the checkout. “It is enough for the prosecution to prove the assumption of any rights of the owner of the goods in question.”

Can A Defendant Appropriate An Item When He Has Been Given Them By The Owner?

An Italian student came to the UK and got a taxi. He spoke very little English so he showed the driver an address. The journey should have cost 50p but the defendant told him it was expensive. The student offered a £1 note. The defendant said it was not enough so the student opened his wallet and allowed the defendant to take another £6. The defendant argued that he had not appropriated the money as the student consented him to taking it. The court held there was an appropriation in this situation. It did not matter whether there had been consent.

The defendant was an assistant manager of a shop. He persuaded the manager to sell electrical goods worth over £17,000 to an accomplice and to accept payment by 2 cheques. The cheques were stolen and had no value. The House of Lords held:

What If There Was No Deception?

Consent is irrelevant to appropriation.

The defendant was a 38 year old woman who befriended a very naïve man with a low IQ. He was, however, mentally capable of understanding the concept of making a valid gift. Over a period of about 8 months the defendant accompanied the man on numerous occasions to his building society where he would draw money. The total amount was around £60,000 and it was deposited into the defendants account. The defendant argued that if the gift was valid the acceptance if it could not be theft. The House of Lords dismissed the appeal on a majority of 3 to 2. Even though the property was a valid gift, the House of Lords accepted this but considered it to be irrelevant in this situation.

A Later Assumption Of Right

This states that property is money, and all other property, whether it be real, in action or intangible property.

Intangible property = things that can’t be touched, for example, the McDonald’s “M”.

Section 5(1) states property shall be regarded as belonging to any person having possession or control of it, or having any proprietary right or interest in it.