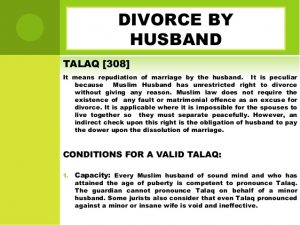 The Dissolution of Muslim Marriage Act was passed in 1939, in order to give Muslim women the right to seek divorce. == In India, Muslim marriage is a civil contract between a man and a woman. Dissolution of marriage can be done at the instance of the husband (talaq), wife (khula) or mutually (mubarat).

It is in the field of divorce that the most flagrant inequality between husband and wife exists. The husband has the right of unilateral divorce, for no cause at all. The wife has no such right, and when her husband exercises his right, the wife has no redress. 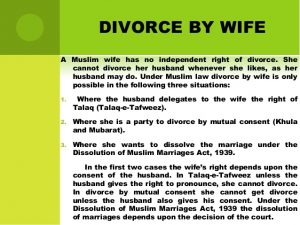 The women can have judicial separation on specified grounds through intervention of Court. The Muslim Family Law Ordinance 1961 though has already provided for arbiters, the arbitration council cannot prevent the talak by the husband even if it be highly arbitrary and unjust and can only delay the action in the hope that some conciliation will result. The most common mode of divorce by man prevalent in Bangladesh is Bedai Talak (Irrevocable Divorce) which takes effect mmediately without the requirement of communication to the wife for its validity. The husband pronounces three times that he divorces his wife and with the third pronouncement the Talak becomes irrevocable and takes effect on completion of a certain period. This may also be done by writing on a piece of paper. 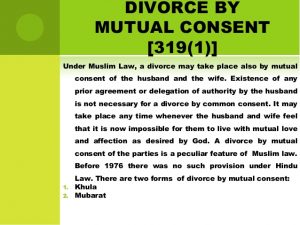 Once this right was exercised the parties could not re-marry  without the intervention of another marriage, i.e. unless the wife was married to a thrid person and then divorced after consummation of the marriage.[9] With the introduction of the Muslim Family Law Ordinance 1961, the position has changed. Section 7 of the Ordinance provides that Divorce given by the husband shall not take effect until the husband has given notice of the Divorce to the chairman of local administrative unit, Union Parishad and ninety days have elapsed after issuance of the said notice and within the said period the husband can revoke the Divorce. The husband is also to give a copy of the said notice to the wife. The Chairman on receipt of the notice would constitute Arbitration Council for effecting a re-conciliation which, if successful, would render the divorce ineffective. It is an offence not to notify the Chairman about exercise of Divorce by the husband. The provisions of Sec. 7 of the Ordinance apply mutatis mutandis in case of divorce exercised by the wife and the divorce does not take effect unless notice thereof is given to the Chairman and 90 days have elapsed thereafter. The husband can delegate his power of divorce to his unconditionally or with condition and that is called Talak-e-Tawfeez. When any condition is stipulated the wife can divorce her husband in the happening of that condition. Now the divorced parties can remarry without the formality of the marriage with third party. (Sec7(6), Muslim Family Laws Ordinance, 1961.) 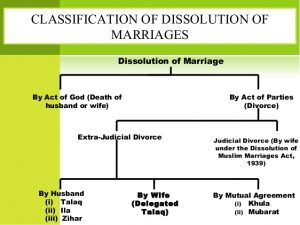 Muslim marriage can be dissolved by agreement between the husband and wife and it may take the force of Khula or Mubarrat. In Khula, the marriage is dissolved by an agreement between the parties for a consideration paid, or to be paid, by the wife to the husband, it being necessary condition that the desire to separate should come from the wife. Where desire to the separation is mutual, it is said to be Mubarat. A wife is entitled to Khula as of right or restoration of what she had received in consideration of  marriage, if she satisfies the conscience of the court that it will otherwise mean forcing her into a hateful union.[10] As stated above, a Muslim female does not have the right to divorce in the way a male has, but she could seek judicial divorce on grounds permitted by Muslim Law. The Dissolution of Muslim Marriage Act, 1939 (Act No.VIII of 1939 (Vide Pakistan Code 1966, Vol.IX,P.716). was passed in order to consolidate and to clarify those grounds and also to add some new grounds.[11] A wife is entitled to obtain a judicial divorce on neglect or failure of the husband to provide maintenance for two years. But if the wife refuses herself to her husband without any lawful excuse and deserts her husband, or otherwise willfully fails to perform her marital duties, she has no right to claim maintenance and cannot obtain a decree for dissolution of marriage on the ground of nonpayment of maintenance. The fact that the wife is a woman of means would not be a defense to the claim of judicial divorce for non-payment of maintenance. A Muslim woman can obtain judicial divorce on any ground recognized by Muslim Law. Thus a wife is entitled to judicial divorce if the husband brings false charge of adultery against her unless the husband bonafide retracts the charge of adultery. To constitute a valid retraction, it must be made before the commencement of the hearing of the suit, it must be bonafide and there must be an admission by the husband about making the charge and an unconditional acknowledgement by him that the charge is false. Incompatibility of temperament as results in a hateful union has been accepted as a ground for seeking judicial divorce. Before the Dissolution of Muslim Marriage Act 1939, apostasy from Islam of either party operated as a complete and immediate dissolution of marriage. After passing of the Act, apostacy from Islam of the wife does not dissolve the marriage (Sec.4 of the Act) while apostacy of the husband dissolves the marriage immediately.[12]

Restrictions have been imposed on polygamy; the husband’s power to divorce remains virtually unrestricted. Women exercising the delegated power of divorcing are seen in oblique eye. After dissolution of marriage the women are deprived of maintenance. It is difficult for the women to go to court for realizing her maintenance and dower after she exercises the power of delegated Talak. Traditional method of dissolving, still dominant. Divorce by adhering to traditional method that means registration by divorce with the Kazis, is still continues. Notice procedure to UP Chairman under section 7/8 is not always popular. Section 6(2) of the Muslim Marriage and Divorce Registration Act, 1974, provides, “an application for registration of divorce shall be made orally by the persons who has or have effected the divorce” but the act does not contain any adverse legal consequence if the registration of divorce is not made. On the other hand, section 7 speaks that the husband shall give notice of talak to chairman. If notice requirement is violated the husband is liable to punishment one year imprisonment of fine maximum Tk.10000/=-or both. So, why the parties shall go for registration of divorce where there is no penal provision for its violation. The Ordinance made provision for constitution of arbitration council within 30 days after the chairman receives the notice. But nothing is said in the ordinance if the chairman does not do his duty. It is may be better to dissolution of marriage and decide about maintenance and dower in any case by the Family Court.