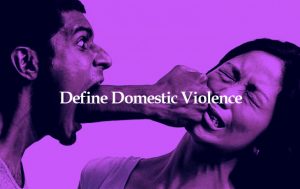 Domestic violence is not physical violence alone. Domestic violence is any behavior the purpose of which is to gain power and control over a spouse, partner, girl/boyfriend or intimate family member. Abuse is a learned behavior; it is not caused by anger, mental problems, drugs or alcohol, or other common excuses.

When the general public thinks about domestic violence, they usually think in terms of physical assault that results in visible injuries to the victim. This is only one type of abuse. There are several categories of abusive behavior, each of which has its own devastating consequences. Lethality involved with physical abuse may place the victim at higher risk, but the long term destruction of personhood that accompanies the other forms of abuse is significant and cannot be minimized.

Please explore the following sections to learn more about how to identify domestic violence.

Sexual Abuse: Sexual abuse is using sex in an exploitative fashion or forcing sex on another person. Having consented to sexual activity in the past does not indicate current consent. Sexual abuse may involve both verbal and physical behavior. This may include, but is not limited to:

Emotional Abuse & Intimidation: According to the AMEND Workbook for Ending Violent Behavior, emotional abuse is any behavior that exploits anther’s vulnerability, insecurity, or character. Such behaviors include continuous degradation, intimidation, manipulation, brainwashing, or control of another to the detriment of the individual(AMEND 3). This may include but is not limited to:

Isolation: Isolation is a form of abuse often closely connected to controlling behaviors. It is not an isolated behavior, but the outcome of many kinds of abusive behaviors. By keeping her from seeing who she wants to see, doing what she wants to do, setting and meeting goals, and controlling how she thinks and feels, he is isolating her from the resources (personal and public) which may help her to leave the relationship. By keeping the victim socially isolated the batterer is keeping her from contact with the world which might not reinforce his perceptions and beliefs. Isolation often begins as an expression of his love for her with statements like if you really loved me you would want to spend time with me, not your family. As it progresses, the isolation expands, limiting or excluding her contact with anyone but the batterer. Eventually, she is left totally alone and without the internal and external resources to change her life.
Some victims isolate themselves from existing resources and support systems because of the shame of bruises or other injuries, his behavior in public, or his treatment of friends or family. Self-isolation may also develop from fear of public humiliation or from fear of harm to herself or others. The victim may also feel guilty for the abuser’s behavior, the condition of the relationship, or a myriad of other reasons, depending on the messages received from the abuser.

Verbal Abuse: Coercion, Threats, & Blame: Verbal abuse is any abusive language used to denigrate, embarrass or threaten the victim. This may include but is not limited to:

According to Barbara Hart in Safety for Women: Monitoring Batterers’ Programs:
All men benefit from the violence of batterers. There is no man who has not enjoyed the male privilege resulting from male domination reinforced by the use of physical violence . . . All women suffer as a consequence of men’s violence. Battering by individual men keeps all women in line. While not every woman has experienced violence, there is no woman in this society who has not feared it, restricting her activities and her freedom to avoid it. Women are always watchful knowing that they may be the arbitrary victims of male violence. Only the elimination of sexism, the end of cultural supports for violence, and the adoption of a system of beliefs and values embracing equality and mutuality in intimate relationships will end men’s violence against women.

Domestic violence is about power and control. A feminist analysis of woman battering rejects theories that attribute the causes of violence to family dysfunction, inadequate communications skills, women’s provocation, stress, chemical dependency, lack of spiritual relationship to a deity, economic hardship, class practices, racial/ethnic tolerance, or other factors. These issues may be associated with battering of women, but they do not cause it. Removing these factors will not end men’s violence against women.

Batterers behave abusively to control their partner’s behavior, thereby achieving and maintaining power over their partners and getting their own needs and desires met quickly and completely. There are also many secondary benefits of violence to the batterer. A batterer may choose to be violent because he finds it fun to terrorize his partner, because there is a release of tension in the act of assault, because it demonstrates manhood, or because violence is erotic for him. Violence is a learned behavior and batterers choose to use violence. The victim is not part of the problem. The victim may accept responsibility for causing the batterer to lose their temper,î but the truth is, the abuser must be held accountable for his behavior.

Four widespread cultural conditions allow and encourage men to abuse women. These are:

Economic Abuse: Financial abuse is a way to control the victim through manipulation of economic resources.
This may include, but is not limited to:

Material from Women’s Center and Shelter of Greater Pittsburgh Volunteer Training Manual, AMEND, and the ACESDV safety plan manual were used to develop this section.