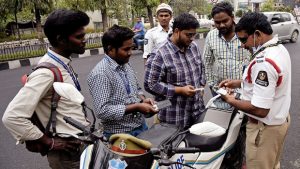 Penalties for driving without a valid license or failing to produce a license when stopped by a police offer range from “fix-it tickets” to vehicle impoundment or even jail time (for driving on a revoked license, for example).

A motorist may violate a driver’s license requirement in a number of ways; Perhaps it was an honest mistake (i.e. he left his driver’s license at home) or maybe there was an attempt to circumvent a known driving restriction (i.e. willingly drove despite knowing that his license was suspended for DUI.)

Here are the most common types of violations related to driver’s licenses:

Penalties for Driving Without a License

Failure to produce a valid driver’s license when asked by a police officer can lead to a number of penalties depending on the circumstances. Charges typically fall into one of two categories: correctable offenses and willful violations.

Simply forgetting to carry your driver’s license while driving a vehicle may lead to a “fix-it ticket,” wherein you must later show proof that you fixed the violation in order to have the citation dismissed by the traffic court. Failure to present this evidence typically leads to fines or other penalties.

Penalties for willful violations of licensing requirements, such as driving on a suspended or revoked license, are much more serious. Driver’s licenses are frequently suspended for DUI offenses, since states have an interest in keeping dangerous drivers off the roads. Therefore, when a driver willfully drives with a suspended or revoked driver’s license, he or she may be cited, arrested, and charged for a misdemeanor offense.

The following examples illustrate the range of penalties for operating a vehicle without a valid driver’s license from state to state:

Do You Need a Lawyer for Your Traffic Ticket?

Most traffic tickets involve infractions and can be handled without the help of a legal professional, often through the mail. But if you are facing license suspension, revocation, or jail time, you may wish to speak with a local traffic ticket lawyer who can help defend the charges against you.