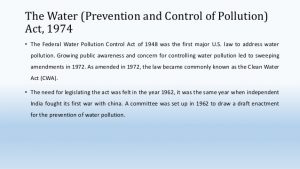 At present a major portion of water resources are allocated to agriculture. Existing agricultural allocations should be revised, due to rapid population growth, urbanization and industrial development.

Before passage of the Clean Water Act (CWA), the right to pollute water was determined primarily by state common law rules of nuisance and of water rights. The common law rules were strict. As a Texas court noted, “any corruption of water which prevents its use for any of its reasonable purposes is an infringement of rights of riparian owners.”

If the common law had not been superseded, it might have provided more ecologically sound pollution control than has occurred under the CWA. Advances in pollution control technology and in understanding the consequences of pollution, and changes in society’s attitudes about pollution would probably have led to a common law standard of strict liability for polluters.

Historically, water law and nuisance law were the two key areas of common law in the control of water pollution. In general, water rights holders had a cause of action against those who damaged the water. “As a general rule, any person who pollutes a natural watercourse to the injury of a riparian owner is liable for the damages resulting therefrom.”

Most water pollution cases were private nuisance actions, generally defined as “…an unreasonable interference with the interest in the use and enjoyment of land.” As it relates to water pollution, private nuisance includes “[S]uch impurities as substantially impair [the water’s] value for the ordinary purposes of life, and render it measurably unfit for domestic purposes…” or cause “unwholesome or offensive vapors or odors” or “are yet of a character calculated to disgust the senses…”

Public authorities also had causes of action against water polluters, usually through a suit for public nuisance. A public nuisance is “the doing of…something that injuriously affects the safety, health or morals of the public, or works some substantial annoyance, inconvenience or injury to the public.” These cases are similar to private nuisance actions.

Federal common law also prohibited water pollution. In 1906, the Supreme Court considered a case brought by Missouri against Illinois. Missouri challenged Chicago’s practice of dumping sewage into Lake Michigan, which emptied into the Mississippi River, the source of drinking water for St. Louis. About 200 people died in St. Louis each year from typhoid.

The federal courts had jurisdiction because the case was a dispute between states and it concerned navigable rivers. The issue was whether the bacteria that caused typhoid could live in the river until it reached St. Louis. If harm could be shown from the pollution, injunctive relief could be obtained. A review of the scientific evidence showed it to be very doubtful that the bacteria could survive the trip, down the river, so the injunction was not granted.

Federal common law actions existed until recent times. In 1971, a federal Court of Appeals upheld the right of the state of Texas to seek an injunction to stop New Mexico farmers from using a pesticide that polluted a river used by Texas citizens.

Months after this case, the CWA was passed. Milwaukee ran back to the courts so it could continue to pollute, and won. The Supreme Court held that the CWA displaced federal common law. It could not he used to impose more stringent effluent standards than those set forth under the CWA and its attendant regulations.Thus, the CWA largely eliminated common law rights of action in point source water pollution cases.

This emasculation of common law rights in water pollution cases makes it difficult to know what the law would have looked like today in the CWA’s absence. However, cases that evaded the statutory scheme give us clues.

For example, in 1981, the Illinois EPA, backed by the U.S. EPA, supported the right of a chemical waste landfill, which was alleged to be causing damage to a nearby village, to remain in operation. The Illinois Supreme Court found that the landfill was causing groundwater contamination and that there could be a chemical explosion given the disposal technique used. The Court held the landfill was a public and a private nuisance. The Court noted the need for toxic landfills,but held that they had to be constructed so as not to impose costs on surrounding landowners who had not agreed to the intrusion. It issued a permanent injunction against the landfill and ordered that the toxic wastes be dug up, moved, and the land restored.

The point of the Illinois case is that parties who may be damaged by water pollution have a lot more incentive to think carefully about the matter than do regulators, no matter how well intentioned or informed the regulators may be. As long as pollution can be imposed on individuals or communities because regulatory agencies determine the legal level, the whole process is a political football.

Under the CWA, water pollution is defined mechanically and by a politically controlled process. The regulation is akin to a federal agency being mandated by Congress to study technology, tell companies how to build products, and certify products as safe. Under such a scheme, companies that complied could not be sued when products were defective and injured people because the government declared the products legally safe. Few would assert that a command-and-control production and liability regime would yield better results than when individuals exercise their rights in a free market.

This does not mean that the common law always produces the most economically efficient or “just” results. The principled nature of the common law lies in its evolutionary and competitive nature— individuals enforcing their rights. The decisions of independent judges, responding to independent cases filed by private parties seeking to protect their common law rights, are far more likely to produce sensible principles than are legislative bodies that produce rules greatly influenced by special interests, or rules that may reflect a crisis of the moment but make little sense for the long term.

[61] Missouri v. Illinois. 200 U.S. 496 (1906). This holding was not peculiar to water. The Supreme Court also recognized the right of states to obtain an injunction against air pollution sources that imposed damage on another state. Evidence of damage from sulphur dioxide from a Tennessee company to vegetation in Georgia was held sufficient to allow Georgia to move for an injunction. Georgia v. Tennessee Copper Co., 206 U.S. 230 (1907).

[7] Most cases were in state courts. For a review of hundreds of actions, see Peter Davis, “Theories of Water Pollution Litigation,” 1971 Wisconsin Law Review 738. Here we jump to the last federal cases before passage of the CWA.

The arsenic hazard in Bangladesh villagers now appeared as a ‘real disaster’, affecting thousands physically, physiologically, mentally and economically; it is intensifying malnutrition, poverty and destitution among the already poor villagers. The future of the Bangladesh villages is jeopardized.  Arsenic contaminated underground water is one such severe problem which the government has failed to manage properly. Five years after the approval of National Policy for Arsenic Mitigation and Implementation Plan, two lakh people still face the threat of cancer annually due to drinking of arsenic contaminated water in Bangladesh, says a report of World Health Organisation (WHO).

Water resource pollution is due to increased water consumption and man-made activities, leading to new limitations on water operation for different uses. These limitations will either reduce available water supplies or decrease operational costs considerably.