Crimes can be broken down into elements, which the prosecution must prove beyond a reasonable doubt. Criminal elements are set forth in criminal statutes, or cases in jurisdictions that allow for common-law crimes. With exceptions, every crime has at least three elements: a criminal act, also called actus reus; a criminal intent, also called mens rea; and concurrence of the two. The term conduct is often used to reflect the criminal act and intent elements. As the Model Penal Code explains, “‘conduct’ means an action or omission and its accompanying state of mind” (Model Penal Code § 1.13(5)). 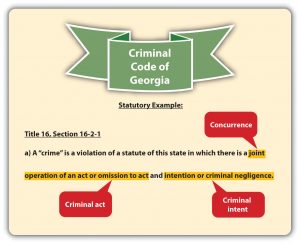 Each crime has its own set of elements—components that the prosecution must prove beyond a reasonable doubt in order to establish the defendant’s guilt. If the prosecution fails to prove any element, then the jury must acquit.

For example, a drug possession law might require that the defendant:

So, if the prosecution can establish that Michael had a bag of marijuana in his pocket, but can’t show that he knew that the substance was cannabis rather than caprese salad, the jury must acquit. Or, if the government can show that Wallace had cocaine inside his jacket pocket, but that it was only a trace amount that couldn’t be used, then he isn’t guilty.

Actus Reus, Mens Rea and no defence are the main elements of a crime (murder). Actus Reus (is the guilty Act) has three common elements, which are causing an unlawful death of a human being. The act or omission of the defendant must have been the legal cause of the death of the victim. “But for” Peeta actions the defendant has died. “ He picked up the cricket bat and clubbed her to death”. If he did not do this Shami, Peeta’s wife wouldn’t have died. In R v White (1910) “the defendant wanted to kill his mother. He poisoned her drink but she died of natural causes (heart attack) before the poison took effect. In this particular case the factual causation is established by asking whether the victim would have died ‘but for’ the defendants conduct.”

The reason for Peeta to take these actions where because he was suspecting on Shami having an affair with someone because of the text message he read on her phone, Shami also mocked him about his man-hood, due to this he felt very dejected and upset. But however he was also suffering from stress because previously he had possibilities of losing his job, being redundant and due to this he has turned a heavy drinker and is now suffering from chronic alcoholism.

Mens Rea (is the guilty mind) it is the intention to kill or actually cause GBH (Grievously bodily Harm). The mens rea for murder is ‘Malice Aforethought’. The House of Lords in R v Moloney (1985) held that “nothing less than intention to kill or cause Grievously bodily harm (GBH) would constitute malice aforethought merely foreseeing the victim’s death as probable was insufficient.” 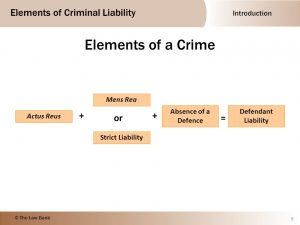 Means rea in this particular case would be When Peeta “picked up his cricket bat, went over to Shami in the sitting room and he clubbed her to death.” the intention to cause GBH but instead caused the death of the Human being. In R v Woollin (1998) “the defendant lost his temper and threw his three months old son on a hard surface. His son suffered injuries to his head and died. Woollin was charged with murder but denied that he had an intention to cause his son harm. Then the trial judge summed up using the phrase, virtual certainty and substantial risk. He was held of convicting murder and appealed against the use of the term of ‘substantial risk’.”

So the advice I could give Peeta is successfully plead a defence of provocation and diminished responsibility. That provocation made Peeta suddenly lose his self-control, it was a ‘sudden and temporary loss of self-control.’ He was provoked because his wife Shami mocked him about his man-hood and the text message he read made him feel dejected and upset. So that why he committed the offence he has.

Provocation could be used to defense Peeta so his sentence is reduced, which has been modified by s3 of the Homicide Act 1957. “ Where on a charge of murder there is evidence on which the jury can find that the person charged was provoked (whether by things said or by both together) to lose his self-control, the question whether the provocation was enough to make a reasonable man do as he did shall be left to be determined by the jury; and in determining that question the jury shall take into account everything both done and said according to effect which, in their opinion, it would have on a reasonable man”

They are three procedures to follow in provocation. First one, is they’re any evidence of provocation case of R v doughty (1986) crim LR 625 illustrates this, “the defendant had killed his baby and wanted to argue that he had been provoked by the child’s persistent crying. On appeal it was held to be misdirection for the trial judge to tell the jury that persistent crying of a 17 months baby could not constitute provocation and therefore he was not charged with murder but was charged with manslaughter. This point has been recently reaffirmed by the House of Lords in R v Acott (1997).”

In Peeta’s and Shami’s case there is evidence of provocation because for the last 6 months, Peeta and Shami have had a number of violent arguments and Shami has mocked him about his man-hood, so because of this he has been very upset and stressed.

The second procedure of provocation is that was the defendant provoked case of R v Ibrams and Gregory (1981) 74 Cr App R 154 defines this, “the defendant was convicted of murder and on appeal it was held that the judge was right that there was no evidence of loss of self-control. Lawton LJ expressed the view that the time gap between the last act of provocation and the killing refuted any evidence that it had been carried out by the defendant suffering from a sudden and temporary loss of self-control.” Peeta was provoked. The evidence is that ‘she mocked him about his man-hood and possibility of him losing his job and the text message he read on the phone, due to all this he felt dejected.’ she literally provoked him to cause the actions he has. Finally the third one is the reasonable man test. Having decided that the defendant was provoked, the jury must decided whether a reasonable man would have acted in the same way or not Dpp v Camplin (1978) AC 705.

When a defendant has cased a victim’s death and has been proved to have the necessary mens rea for murder. He could also avoid a conviction for murder by establishing that he comes within the scope of the defence of Diminished responsibility which comes under voluntary manslaughter.

Peeta could use diminished responsibility as well as provocation to defence himself; he will be guilty of manslaughter instead of murder under S2 of the Homicide act 1957. “Where a person kills or is partly to a killing of another, he shall not be convicted of murder of he was suffering from such abnormality of mind (whether arising from a condition of arrested or retarded development of mind or any inherent causes or induced by disease or injury) as substantially impaired his mental responsibility for his act and omission in doing or being a party to the killing”

When Peeta pleads diminished responsibility he has to prove, that he was suffering from an abnormality of mind. Peeta was a heavy drinker and was suffering from chronic alcoholism. Due to him drinking alcohol and suffering from chronic alcoholism, Peeta maybe was not in control of his actions. Diminished responsibility has been pleaded with success in the following cases R v Ahluwalia (1992) 4 ALL ER 899 and R v Thornton (No 2) (1996) 2 All ER 1023 clearly explain provocation and the loss of self-control.

Diminished responsibility and intoxication is the fact that a defendant might have been drunk at the time of committing a murder. Peeta could also use this to defence himself because he was suffering from chronic alcoholism and had turned into a heavy drinker. Suffering form Alcohol is an abnormality of the mind The court of appeal in R v Atkinson (1985) crim LR 314 and R v Egan (1992) 4 All ER 470 defined this.

All crimes feature certain elements. Unless the government is able to prove the existence of these elements, it can’t obtain a conviction in a court of law.

No crime without law

There can be no crime without law. If an act is to be prohibited, a legally authoritative body (such as Congress or a state legislature) must spell out in advance what behavior is banned. The U.S. Constitution forbids ex post facto laws, which declare certain acts to be illegal after the behavior occurs. The Constitution also requires that criminal laws be written in precise terms so that a citizen can determine what conduct is illegal.

No crime without a criminal act

In American criminal justice, the government punishes people for what they do rather than for what they think or say. The First Amendment protects an individual’s freedom of thought and speech. The failure to act, however, can be a crime in situations in which an individual has a legal responsibility to do something. Tax laws and child‐neglect laws are two examples. Threatening to act and attempting a criminal act can both be criminal offenses. Similarly, conspiring to commit a crime is illegal. Conspiracy statutes criminalize taking steps to carry out a plan to commit a crime.

No crime without intent

Intent pertains to the state of mind or mental attitude with which a person does an act. A synonym for intent, mens rea, literally means “guilty mind”. The mental design or purpose to commit a crime is the essence of intent.

No crime without concurrence

For an act to be a crime, both the act and the intent must occur at the same time.