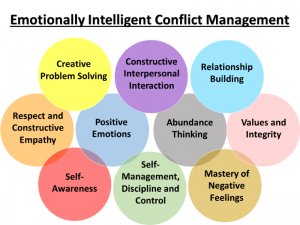 Emotional conflict is the presence of different and opposing emotions relating to a situation that has recently taken place or is in the process of being unfolded. They may be accompanied at times by a physical discomfort, especially when ‘a functional disturbance has become associated with an emotional conflict in childhood’, and in particular by tension headaches ‘expressing a state of inner tension or caused by an unconscious conflict’.

Fear of heights: when suspended high above the earth in a perfectly safe metal cage, one feels afraid. Even though one judges that one is safe, this does not prevent one feeling immense fear at the huge distance between oneself and the ground. There is a sense in which the judgement1 that one is safe conflicts with one’s fear. There is nothing strange or phobic about this fear of heights (example originally from Hume, recently used by Döring (2003, 223)).

For C. G. Jung, “emotional conflicts and the intervention of the unconscious are the classical features of medical psychology”. Equally, ‘Freud’s concept of emotional conflict as amplified by Anna Freud…Erikson and others is central in contemporary theories of mental disorder in children, particularly with respect to the development of psychoneurosis’

One thought behind these accounts is that emotion is similar to sense perception. An interesting feature they sometimes share is what is known as informational encapsulation, a phenomenon sometimes claimed to indicate the presence of a mental module, a mental system separated from other cognitive processes (Griffiths 1997, 93). A mental process is informationally encapsulated when it is unaffected by information stored in other cognitive systems. If a process is informationally encapsulated, it will also be cognitively impenetrable, which means that it is not affected by a person’s beliefs or assumptions. Both these features can be a matter of degree, so that a process can be more or less encapsulated or penetrable. An example of an informationally encapsulated emotion is a case such as fear of heights, where the fear remains unaffected by the belief that being in the cage is not dangerous in any way. An example from perception would be a case where one’s belief that one was experiencing a visual illusion did not prevent one from continuing to perceive the illusion. This feature is part of what makes both emotion and perception seem to be passive experiences. Another factor is that both are typically responses to stimuli in one’s environment.3Furthermore, perception and emotion are both responses to one’s environment as experienced from a particular viewpoint; this seems to be a necessary part of their phenomenology.

‘The early stages of emotional development are full of potential conflict and disruption’. Infancy and childhood are a time when ‘everything is polarised into extremes of love and hate’ and when ‘totally opposite, extreme feelings about them must be getting put together too. Which must be pretty confusing and painful. It’s very difficult to discover you hate someone you love’. Development involves integrating such primitive emotional conflicts, so that ‘in the process of integration, impulses to attack and destroy, and impulses to give and share are related, the one lessening the effect of the other’, until the point is reached at which ‘the child may have made a satisfactory fusion of the idea of destroying the object with the fact of loving the same object’.

Once such primitive relations to the mother have been at least partially resolved, ‘in the age period two to five or seven, each normal infant is experiencing the most intense conflicts’ relating to wider relationships: ‘ideas of love are followed by ideas of hate, by jealousy and painful emotional conflict and by personal suffering; and where conflict is too great there follows loss of full capacity, inhibitions symptom formation.

Defenses against emotional conflict include ‘splitting and projection. They deal with intrapsychic conflict not by addressing it, but by sidestepping it’. Displacement too can help resolve such conflicts: ‘If an individual no longer feels threatened by his father but by a horse, he can avoid hating his father; here the distortion way a way out of the conflict of ambivalence. The father, who had been hated and loved simultaneously, is loved only, and the hatred is displaced onto the bad horse.

In much of the discussion in the literature, it seems that the following things are assumed about conflict between emotion and judgement: