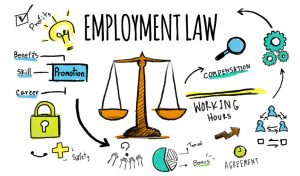 Labour law (also labor law or employment law) mediates the relationship between workers (employees), employers, trade unions and the government. Collective labour law relates to the tripartite relationship between employee, employer and union. Individual labour law concerns employees’ rights at work and through the contract for work. Employment standards are social norms (in some cases also technical standards) for the minimum socially acceptable conditions under which employees or contractors are allowed to work. Government agencies (such as the former US Employment Standards Administration) enforce labour law (legislative, regulatory, or judicial).

Labour law arose in parallel with the Industrial Revolution as the relationship between worker and employer changed from small-scale production studios to large-scale factories. Workers sought better conditions and the right to join (or avoid joining) a labour union, while employers sought a more predictable, flexible and less costly workforce. The state of labour law at any one time is therefore both the product of, and a component of struggles between various social forces.

As England was the first country to industrialise, it was also the first to face the often appalling consequences of capitalist exploitation in a totally unregulated and laissez-faire economic framework. Over the course of the late 18th and early to mid-19th century the foundation for modern labour law was slowly laid, as some of the more egregious aspects of working conditions were steadily ameliorated through legislation. This was largely achieved through the concerted pressure from social reformers, notably Anthony Ashley-Cooper, 7th Earl of Shaftesbury, and others.

A serious outbreak of fever in 1784 in cotton mills near Manchester drew widespread public opinion against the use of children in dangerous conditions. A local inquiry presided over by Dr Thomas Percival, was instituted by the justices of the peace for Lancashire, and the resulting report recommended the limitation of children’s working hours. In 1802, the first major piece of labour legislation was passed − the Health and Morals of Apprentices Act. This was the first, albeit modest, step towards the protection of labour. The act limited working hours to twelve a day and abolished night work. It required the provision of a basic level of education for all apprentices, as well as adequate sleeping accommodation and clothing.

The rapid industrialisation of manufacturing at the turn of the 19th century led to a rapid increase in child employment, and public opinion was steadily made aware of the terrible conditions these children were forced to endure. The Factory Act of 1819 was the outcome of the efforts of the industrialist Robert Owen and prohibited child labour under nine years of age and limited the working day to twelve. A great milestone in labour law was reached with the Factory Act of 1833, which limited the employment of children under eighteen years of age, prohibited all night work and, crucially, provided for inspectors to enforce the law. Pivotal in the campaigning for and the securing of this legislation were Michael Sadler and the Earl of Shaftesbury. This act was an important step forward, in that it mandated skilled inspection of workplaces and a rigorous enforcement of the law by an independent governmental body.

A lengthy campaign to limit the working day to ten hours was led by Shaftesbury, and included support from the Anglican Church. Many committees were formed in support of the cause and some previously established groups lent their support as well. The campaign finally led to the passage of the Factory Act of 1847, which restricted the working hours of women and children in British factories to effectively 10 hours per day.

These early efforts were principally aimed at limiting child labour. From the mid-19th century, attention was first paid to the plight of working conditions for the workforce in general. In 1850, systematic reporting of fatal accidents was made compulsory, and basic safeguards for health, life and limb in the mines were put in place from 1855. Further regulations, relating to ventilation, fencing of disused shafts, signalling standards, and proper gauges and valves for steam-boilers and related machinery were also set down.

A series of further Acts, in 1860 and 1872 extended the legal provisions and strengthened safety provisions. Steady development of the coal industry, increasing association among miners, and increased scientific knowledge paved the way for the Coal Mines Act of 1872, which extended the legislation to similar industries. The same Act included the first comprehensive code of regulation to govern legal safeguards for health, life and limb. The presence of a more certified and competent management and increased levels of inspection were also provided for.

By the end of the century, a comprehensive set of regulations was in place in England that affected all industries. A similar system (with certain national differences) was implemented in other industrializing countries in the latter part of the 19th century and the early 20th century.

The basic feature of labour law in almost every country is that the rights and obligations of the worker and the employer are mediated through a contract of employment between the two. This has been the case since the collapse of feudalism. Many contract terms and conditions are covered by legislation or common law. In the US for example, the majority of state laws allow for employment to be “at will”, meaning the employer can terminate an employee from a position for any reason, so long as the reason is not explicitly prohibited, and, conversely, an employee may quit at any time, for any reason (or for no reason), and is not required to give notice.

One example of employment terms in many countries is the duty to provide written particulars of employment with the essentialia negotii (Latin for “essential terms”) to an employee. This aims to allow the employee to know concretely what to expect and what is expected. It covers items including compensation, holiday and illness rights, notice in the event of dismissal and job description.

Many jurisdictions define the minimum amount that a worker can be paid per hour. Australia, Belgium, Brazil, Canada, China, France, Greece, Hungary, India, Ireland, Japan,South Korea, Luxembourg, the Netherlands, New Zealand, Paraguay, Portugal, Poland, Romania, Spain,Taiwan, the United Kingdom, the United States, Vietnam and others have laws of this kind.[citation needed] The minimum wage is set usually higher than the lowest wage as determined by the forces of supply and demand in a free market and therefore acts as a price floor. Each country sets its own minimum wage laws and regulations, and while a majority of industrialised countries has a minimum wage, many developing countries do not.

Minimum wages are regulated and stipulated in some countries that lack explicit laws. In Sweden minimum wages are negotiated between the labour market parties (unions and employer organisations) through collective agreements that also cover non-union workers and non-organised employers.

Some of the most notable employment law in the United States includes the following:

The Fair Labor Standards Act of 1938 sets a federal minimum wage. Many states also have minimum wage laws. States can’t make a lower minimum wage, but they can make the minimum wage higher than federal law requires. Different types of employees might have special considerations. For example, employers who have employees that earn tips may be able to rely on tips to make up some of the employee’s minimum pay.

The United States has no requirement for paid medical leave. However, the Family and Medical Leave Act of 1963 says that large employers must offer up to 12 weeks of unpaid family leave. An employee can use family leave after the birth of a child or after an adoption. They can use it for their own health problem or to care for a spouse, child or parent who has a serious health condition.

Employees have a right to safe working conditions. The Occupational Safety and Health Act of 1970 (OSHA) protects employees from foreseeable hazards at work including chemicals, extreme temperatures, noise, sanitation problems and conditions that are likely to cause injuries. Employers can’t retaliate against an employee for exercising their rights under OSHA.