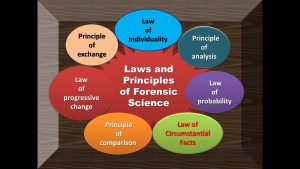 Forensic science is a multidisciplinary subject used for probing crime scenes and gathering evidence to be used in prosecution of offenders in a court of law.  Forensic science techniques are also used to examine compliance with international agreements regarding weapons of mass destruction.  The main areas used in forensic science are biology, chemistry, and medicine, although the science also includes the use of physics, computer science, geology, and psychology. Forensic scientists examine objects, substances (including blood or drug samples), chemicals (paints, explosives, toxins), tissue traces (hair, skin), or impressions (fingerprints or tidemarks) left at the crime scene.

Forensic science has undergone dramatic progress in recent years, including in the area of DNA collection and analysis and the reconstruction of crime scenes. However, only a very few professionals are equipped with the knowledge necessary to fully apply the potential of science in civil, criminal, and family legal matters.

Forensic science is the scientific method of gathering and examining information about the past which is then used in a court of law. The word forensic comes from the Latin forēnsis, meaning “of or before the forum.” The history of the term originates from Roman times, during which a criminal charge meant presenting the case before a group of public individuals in the forum. Both the person accused of the crime and the accuser would give speeches based on their sides of the story. The case would be decided in favor of the individual with the best argument and delivery. This origin is the source of the two modern usages of the word forensic – as a form of legal evidence and as a category of public presentation. In modern use, the term forensics in the place of forensic science can be considered correct, as the term forensic is effectively a synonym for legal or related to courts. However, the term is now so closely associated with the scientific field that many dictionaries include the meaning that equates the word forensics with forensic science.

For instance, Archimedes (287–212 BC) invented a method for determining the volume of an object with an irregular shape. According to Vitruvius, a votive crown for a temple had been made for King Hiero II, who had supplied the pure gold to be used, and Archimedes was asked to determine whether some silver had been substituted by the dishonest goldsmith. Archimedes had to solve the problem without damaging the crown, so he could not melt it down into a regularly shaped body in order to calculate its density. Instead he used the law of displacement to prove that the goldsmith had taken some of the gold and substituted silver instead

The first written account of using medicine and entomology to solve criminal cases is attributed to the book of Xi Yuan Lu (translated as Washing Away of Wrongs written in China by Song Ci, 1186–1249) in 1248, during the Song Dynasty. In one of the accounts, the case of a person murdered with a sickle was solved by an investigator who instructed everyone to bring his sickle to one location. (He realized it was a sickle by testing various blades on an animal carcass and comparing the wound.) Flies, attracted by the smell of blood, eventually gathered on a single sickle. In light of this, the murderer confessed. The book also offered advice on how to distinguish between a drowning (water in the lungs) and strangulation (broken neck cartilage), along with other evidence from examining corpses on determining if a death was caused by murder, suicide or an accident.

Methods from around the world involved saliva and examination of the mouth and tongue to determine innocence or guilt. In ancient Chinese and Indian cultures, sometimes suspects were made to fill their mouths with dried rice and spit it back out. In ancient middle-eastern cultures the accused were made to lick hot metal rods briefly. Both of these tests had some validity since a guilty person would produce less saliva and thus have a drier mouth. The accused were considered guilty if rice was sticking to their mouths in abundance or if their tongues were severely burned due to lack of shielding from saliva.

Science and law always have had an uneasy coalition: Back from the fourteenth century, scientific evidence has posed intense challenges for the law. These challenges arise from fundamental differences between the legal and scientific processes.  The legal system embraces the adversary process to achieve “truth,” for the ultimate purpose of attaining an authoritative, final, just, and socially acceptable resolution of disputes. Thus law sets standards and seeks to define how public and private relations should function.  In contrast to law’s vision of truth, however, science embraces empirical analysis to discover truth as found in certifiable facts. Thus Science does not define how the universe should be but rather describes how it actually is making it more descriptive.