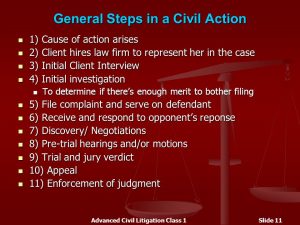 A civil lawsuit differs in that it is to resolve matters between private parties.  One person believes another has harmed him, and the courts are available to resolve the problem.

In a civil lawsuit, an individual or corporation called the plaintiff brings another party, referred to as the defendant, to court. The plaintiff asks a judge to order the defendant either to pay money or perform a specific action. A civil suit may involve family law matters, a contract dispute or a tort.

A tort is a wrongful act, not including a breach of contract or trust, that results in injury to another’s person, property, or reputation and for which the injured party is entitled to compensation.  Intentional torts include battery, libel and slander.  Negligent torts are the result of conduct that causes unintended injury. Auto accidents, medical malpractice or product liability are examples of negligent torts.  An attorney well versed in a particular legal area is important as each has rules unique to it, though the basic principles that follow apply in most instances.

The plaintiff, or injured party, typically with the help of an attorney, files an initial document called a complaint, the first pleading in a civil action, stating the cause of action.

The plaintiff’s complaint asks for damages or relief from a defendant, who is alleged to have caused the injury.  The complaint outlines the legal and factual reasons why the plaintiff believes the defendant is responsible for his injury.

Motions in the Early Stages

If a court grants either of these early motions, the lawsuit may end. This is why motions to dismiss or for summary judgment are usually the first parts of a lawsuit.  If these motions are denied (or not filed as inappropriate), then the lawsuit proceeds.

During the pre-trial phase, the lawyers may request the judge to bar specific evidence, witnesses or arguments as legally improper. The judge grants or denies the motions. Upon completion of discovery, decisions on pre-trial motions and failure to reach a settlement the matter is ready to go to trial.

The losing party may file an appeal if they believe the outcome was incorrect legally.  An appellate court may dismiss the appeal, hear and affirm the judgment, reverse it, or send it back to the trial court with instructions to correct legal errors. Many lawsuits go between the appellate court and trial court multiple times before final resolution.

The above outlines the basics of how a civil lawsuit proceeds.  There can be many twists and turns along the way, with the attorneys filing many different motions.  There are time deadlines and extensions.  The process is extremely important.  A plaintiff or defendant can be completely right on the facts but fail to follow the process and lose the case.  While a party to a lawsuit should have an understanding of the basic process, each area of law has its own quirks.  The rules for a breach of contract, intentional torts, negligent torts, family law, or malpractice differ from each other.  An attorney should be familiar with not only the general process, but also the specific area of law.