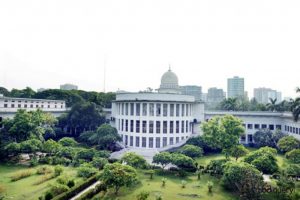 In exercise of powers conferred under Article 94 of the constitution the Apex Court of the country was established which consists of:

Jurisdiction of the Appellate Division –

The Jurisdiction of the High Court Division

The High Court Division has original, appellate and other jurisdictions, powers and functions as are conferred by the Constitution and other laws-

3.Joint District Judge Court- i) Original Jurisdiction- hearing of civil suit of which valuation is from twenty five lac taka to unlimited,

ii) Revision-  which case is transferred to this Court by District Judge,

iii)Appeal –which case is transferred to this Court by District judge.

5. Assistant Judge Court-  to try civil suits of which pecuniary jurisdiction is below fifteen lac taka.

7. Family Courts –This court  try suits which are of family matters i.e.- dissolution of marriage, dower, custody and guardianship of children, restitution of conjugal rights and maintenance relating to matters.

(i) Court of Sessions:  There shall be in every division the following Sessions Court-

All over the country other than Metropolitan Areas-

(c) Magistrate of the first Class,

(d) Magistrate of the Second Class,

(e) Magistrate of the Third Class.

(a) Crime against Humanity,

(b) Crime against peace,

(e) Violation of any humanitarian rules applicable in armed conflicts laid down in the Geneva conventions, 1949,

(f) Any other crime under the International Law.