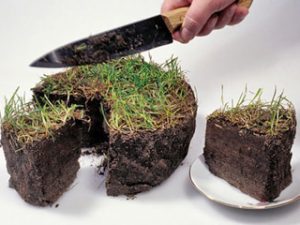 The ordinary meaning of the word ‘land’ is that of dry superficies of the earth as distinguished from water or air. As a legal term, land means not merely the dry superficies of the earth, but also comprises of all that has material form that man has received or can receive from nature, that is to say, from God. Furthermore, the expansive meaning of the term land means the surface of the earth often distinguished from water. Land legally includes all houses and other buildings standing or built on it. Moreover, land includes that part of the property which is in a direct line between the surface and the centre of the earth, such as mines of metals and fossils.

In other words, land is defined as a real property. Land is also an area of ground with defined boundaries, including minerals or resources below the surface and anything growing on or attached to the surface. Generally, all the buildings erected upon it are land, but there are some exceptions to this general rule. In case if a stranger constructs a building on another’s land, they will be a part of the owner’s land, and will belong to the owner. Some cases have been decided that such an erection, under peculiar circumstances, would be considered as personal property.

The key statute in defining land is the Law of Property Act 1925, specifically section 205(ix). The definition is somewhat wordy, but legally, land means the actual land (i.e. soil, ground and earth) plus any buildings on the land, fixtures attached to the land, mines, minerals and some airspace. However, as you can imagine, there have been some cases throughout history where there have been complications. Shall we?chattelshe Law of Property Act 1925 says that when land is transferred (conveyance), it includes fixtures attached, unless specifically excluded. But when is something a chattel – an item of personal property that does come as part of the land?This has been set out in case law, specifically TSB Bank PLC v Botham 1996. The court decided that the bath, toilet and bathroom and kitchen units were fittings. Curtains, carpets, lights, appliances (such as dishwashers and washing machines) were chattels. Lord Justice Roch set out indicators to be used when deciding on items, including whether or not the item could be removed without damaging fabric to the building, and whether or not it was free standing or set into the building.AirspaceTrespass is the result of airspace 200 metres (technically the lower stratum) above roof level being invaded. Kelsen v Imperial Tobacco 1957 saw an advertising sign erected by Imperial Tobacco deemed to be an encroachment on airspace amounted to trespass. However, Lord Bernstein v Skyviews and General Ltd 1977 ruled that a bird’s eye view photo of a country house was not trespass of airspace, as the photo was taken from the higher stratum. Rights over airspace are limited to a height that is necessary for ordinary use and enjoyment of the land.

Although the legal principle is that the owner of the land owns everything down to the depths of the earth. Bocardo SA v Star Energy UK Ltd 2010 found that although the defendants had legally applied for a license to search for and extract petroleum, they had encroached into the strata (layer) beneath the claimants land. The owner of the land owns the layers beneath it unless they relinquish these rights.

Elwes v Brigg Gas Co 1886 ruled that a prehistoric boat buried six feet below the soil belonged to the owner of the land. “But what about treasure chests?!”, I hear you cry.

Funnily enough, Attorney General of the Duchy of Lancaster v GE Overton (Farms) Ltd 1981 was the subject of over 7,000 Roman coins. The Coroner’s Court found that this amounted to treasure, and belonged to the Crown. The defendants said that treasure is only treasure when gold and silver coins are in the mix. It was ruled that this was the case, and a claim to treasure did not extend to items that were not gold or silver. Judge Dillon ruled that treasure is only treasure when there is a “substantial” amount of gold and silver, concealed in the land with the owner unknown. This interpretation is also subject to the Treasure Act 1996, where the more intricate details are ironed out. Importantly, the Act outlines that a reward may be paid to the owner of the land which it is found on. Get digging!

So what about items found on the ground? For instance, if you wander across a gold bracelet in an airport terminal, like the claimant did in Parker v British Airways Board 1982, hand it in but say that it should be returned to you if nobody comes forward to claim it, the bracelet is the finders. Indeed, where you are invited to land, any property you find on that land, unless the owner has made it clear that objects found will belong to them. This must be mentioned before an object is found, and obviously if you find something whilst trespassing, your claim is severely weakened.

If you own land, you also own the animals and fish found within the property boundaries. So next time you buy a country estate, you have the right to hunt and catch the wild animals and fish.

How useful is all that information (hint: super!)? Now you know how land is defined and the complications that may arise with regard to claims on fixtures, airspace, mines, minerals, treasure and wildlife. Those land law essays better watch out!