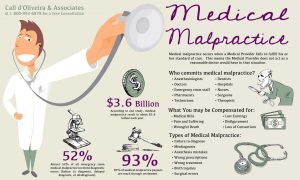 Medical malpractice occurs when a hospital, doctor or other health care professional, through a negligent act or omission, causes an injury to a patient. The negligence might be the result of errors in diagnosis, treatment, aftercare or health management.

To be considered medical malpractice under the law, the claim must have the following characteristics:

Medical malpractice can take many forms. Here are some examples of medical negligence that might lead to a lawsuit:

What is Legal Malpractice?

Legal malpractice occurs when a lawyer commits an error, omission or breach of duty to the client or the justice system that results in a negative legal outcome or monetary loss for the client or a third party.

To be considered malpractice under the law, the claim must have the following characteristics:

Attorney malpractice can take many forms. Here are some examples of legal negligence that might lead to a lawsuit:

If you believe that you or a family member may have been a victim of attorney malpractice, you should consult a Board Certified legal malpractice attorney.

ABPLA Board Certified legal negligence attorneys are among the best legal malpractice lawyers in the country. Each Board Certified attorney must meet and exceed rigorous standards through Experience, Ethics, Education, Examination and Excellence in professional liability law.

According to a report by the Institute of Medicine, medical errors are responsible for at least 44,000 deaths each year in the United States and possibly as many as 98,000 each year. Medication errors alone contribute to more than 7,000 deaths annually.

Examples of medical malpractice include:

If you believe that you or someone you love has been the victim of medical malpractice, contact us immediately. We are here to help.

In England and Wales, there has been a number of initiatives engaged to tackle the increasing problem of waiting lists on the NHS. In England, the current target is that no patient should wait longer than 6 months from GP referral to treatment (or initial outpatient appointment) although the Government’s target is to improve this to no more than 18 weeks by 2008.

One of the initiatives, and perhaps also the most controversial, is to refer a number of NHS patients each year whom are waiting for surgery to a private hospital or clinic for treatment largely by foreign doctors. This is designed to speed up the process and allow patient choice as to where and when they have their operative treatment. However, this has not been without its critics. One particular problem is that of liability for Clinical Negligence claims. When such a referral is made, who is to blame if the surgery goes wrong? Does the patient bring a claim against the NHS Trust, the individual doctor or the private company that has employed him or her?

We at Thompsons have experience of dealing with such claims, and are finding that a number of patients have had difficulties with treatment provided by foreign doctors and wish to seek advice on what to do next.

In 2003, the Government launched the first wave of specialist diagnostic and treatment centres (otherwise referred to as Independent Sector Treatment Centres or ISTC’s). Companies had to bid for the right to run these centers, and to enter into contracts with the NHS to provide essentially non-urgent treatment, such as orthopaedic or ophthalmic surgery, to reduce the NHS waiting list. Seven private companies won, two being British and the remaining five from Canada, United States and South Africa. These centres operate up and down the UK, providing health care services to NHS patients such as arthroscopies, carpal tunnel syndrome decompression, total knee and hip replacements and termination of pregnancies.

However, it became clear that a problem arose as to where responsibility would lie, should a patient receive negligent treatment and wished to pursue a claim for compensation, where they had received that treatment from a foreign doctor under the employment of a private company which had entered into a contract with the NHS.

The NHS Litigation Authority (NHSLA) administers the clinical negligence scheme for NHS Trusts and provides indemnity cover for all NHS Bodies in England. So, if you receive treatment whilst under the NHS and this is found to be of a standard below that of a reasonably competent medical practitioner (negligent) then the NHSLA will deal with the claim on behalf of the Trust, and pay the compensation to the injured person.

Since July 2004, it has been agreed between the Department of Health and the NHSLA that special arrangements should be made to allow the providers of treatment through the private clinics to benefit from the NHSLA indemnity enjoyed by the NHS Trust that made the referral. Therefore, this prevents the NHS from shirking their responsibility by referring to a private clinic and avoiding liability from a claim which arises subsequently. More importantly for our clients, it means that there is the certainty and financial peace of mind from knowing that a claim can still be pursued against the private company in charge of providing care at the clinic, but that the NHSLA, a Government backed body, will investigate and indemnify the claim. This prevents the unfair scenario whereby a person may be injured by the negligence of a foreign doctor, and judgment be obtained but cannot be enforced, and compensation never obtained because the individual doctor has possibly returned abroad or where the company has become insolvent.

This scenario will cover the vast majority of situations where a referral has been made, but there will be situations where the NHSLA will not provide indemnity and in such a circumstance, we would need to examine the contractual relationship between the referring NHS Trust and the private company. It is highly likely that in those circumstances, commercial clinical negligence indemnity insurance would be in place, to cover the cost of payments of compensation and legal costs.Here at Thompsons, we have a dedicated Clinical Negligence Team, ready to deal with any enquires that you may have in relation to medical treatment you feel went wrong, or not as expected, and if you have been treated by a foreign doctor under the waiting list initiative and wish to seek to make a claim for compensation we are ready and willing to help.

A private hospital is a hospital owned by a for-profit company or a non-profit organization and privately funded through payment for medical services by patients themselves, by insurers, or by foreign embassies. The citizens of this country who have not confidence in public hospitals of this country and want a better service from a surgeon, they only go to a private hospital. But the conditions of the private hospitals are not good. The doctors, nurse and the stuffs of the public hospital, all are involved in corruption. They do not do their duty properly. That means the doctors of the private hospitals are not taking care of their patients properly. The nurses are also not attentive in their duties. The stuffs are not also do their duty properly .The want money or Bribe from the patients i.e. Baksheesh. That’s why the V.I.P and the people who has a lot of money for a better treatment they go to abroad.

In private hospitals, though the patients expend their pocket money but are not getting proper service from their surgeons. In this stage, a true fact will say about the medical negligence in Bangladesh.

On October 29, 2007, when Bangladeshi software engineer Al-Amin P. Mohammad, flew back to Bangladesh to see his ill father struggling for life at the Central Care Unit (CCU) of United Hospital he was in shock.

Al-Amin alleges that when he saw his father lying on a bed, full of blood. Then he asked the nurse to show him where he was operated, and he was speechless to see the unhygienic condition where his father was put in. He stood there for the longest moment, not knowing what to say.

Al-Amin’s father Jalal Uddin was admitted at United Hospital on October 25 under the treatment of Dr Prof. Baren Chakraborty, after he was struck by a sudden chest pain. After Haq had a massive heart attack on October 26, he was given injection and later a ring was put around his heart on October 27. Later that week, Haq’s chest x-ray revealed dark areas over the lung, after which Prof. AH Hossain was involved for the lung treatment. ‘On November 2 that day, Hossain told to Al-Amin that, food was stuck in the patient’s lung and he wants a Bronchoscope immediately.

After the Bronchoscope Prof. Hossain provided cough samples for the Tuberculosis (TB) test in two different diagnostic centres-one in United Hospital, and another in Monowara Diagnostic, at Panthopath, Dhaka. Three days later the result was completely different in the two hospitals. Al-Amin alleges that the United Hospital results showed that his father has not have TB, and the Monowara Diagnostic test result showed that the report was actually positive!.

Al-Amin explains that later they also learnt that his father had suffered from massive brain injury right after being admitted to the hospital, which was not detected by any of the doctors. ‘When he had a heart attack earlier, blood was stuck in his brain. So, he was not being treated for his brain injury during all these days.

Al-Amin also told when his father was given a medication; his father could not recognize them anymore. At that time they requested Prof. Chakraborty to call a neurologist to check his father’s brain, but again he did not bother to listen to him. Two days later, on November 11, his father was announced dead.

Al-Amin story is nothing exceptional, says Dr Quamruzzaman who heads the Dhaka Community Hospital in Malibagh and has himself been a victim of medical negligence through which he lost a perfectly-functioning kidney. ‘We have countless other cases of medical negligence and ignorance. But, it is important to realize that one of the biggest flaws of our health care system is that we have no accountability what so ever.’