Muslim countries often restrict the rights of mothers to raise or even to have the right to visit their own children in the event of a divorce. Instead, these countries cite a “natural right” of fathers to have guardianship over their children; custody defaults to the father after a child reaches particular (often very young) age. Paternal grandfathers or other male relatives of the father have preference in the event of his death, irrespective of the wishes or needs of the child. Loss of their children is a powerful threat, keeping women in otherwise unendurable marriages. 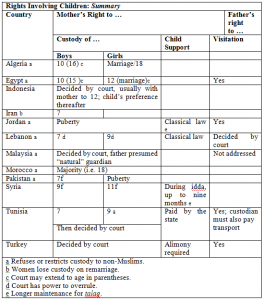 Turkey: The issues of the guardianship, custody, and maintenance of children are best addressed through laws that look to the best interests of the child and that assign equivalent responsibilities to both parents following a separation.

Turkish: Article 182 of the Civil Code states, “As a principle, the judge grants the custody of the children to the parent he or she believes will look after the children better. Men do not have any superiority over women in this respect.”15

Tunisia: Tunisian law (Article 67) dictates that a child be transferred to the father from the mother at age 7 for a boy and age 9 for a girl, unless a judge rules otherwise.16

Iran: In Iran the mother loses custody of her children, regardless of their age, if she  remarries.18 The Government amended in November 2003 the existing child custody law, which in the case of divorce gave a mother custody of a son up to 2 years of age and a daughter up to age 7 years, with custody reverting to the father thereafter. The new law gives a mother preference in custody for children up to 7 years of age; thereafter, the father has custody. After the age of 7 years, in disputed cases, custody of the child is to be determined by the court, taking into consideration the well being of the child.”

Many Islamic countries deny women custody of their children altogether in the event that she renounces Islam, commits acts of “immorality” or adultery, or geographically moves too far away from the father.17

Morocco: The Moroccan family code in its revised form contains language guaranteeing a women’s right to custodianship regardless of her proximity to the father or marital status. It also makes a distinction between money paid as restitution or compensation to the mother and the sum required to maintain the same quality of life of the child, ensuring that one alimony payment will not take the place of parental obligation of continued support.18

The Law of Inheritance consists of two distinct elements: one is the principles of Pre-Islamic Law and the rules lay down by the Holy Quran and the percepts of the Prophet.

According to Tyabji the Holy Quran is an amending act rather than an exhaustive code which made reform upon the ancient tribal law.

Iraq: Introduction of obligatory bequest to grandchildren by predeceased sons or daughters as well as complete freedom of testator to make will within limits of bequeathal one-third of estate; 1963 legislation allowed female descendants of deceased to completely exclude collateral male agnates; 1963 amendments also adopt Shii system of classifying heirs for inheritance, though Sunni principles still govern division of estates among heirs.

Tunisia: Book 9 of TLPS on succession introduced obligatory bequests in favor of orphaned grandchildren through sons or daughters, limited to first generation of grandchildren and to maximum of one-third of estate; introduced and extended doctrine of radd (return) to allow surviving spouse to share in residue of deceased partners estate; also provision that if deceased has only surviving daughters, estate shall go to children and not to paternal uncles.

Senegal: Governed by classical law as outlined in Section III on Muslim succession in Book VII of Family Code; includes provision for only granddaughters through predeceased sons not standing to inherit as residuary heirs from anyone else to receive one-sixth of estate.

Throughout the history of Islamic faith, it has been a deeply cherished objective to emphasize on enveloping the entirety of a person’s life with its normative structure of rules of conduct and precepts. Amongst the major norms of such expected behavior are those that are devised to apply to the institution of the Family. Islam has also a considerable amount of substantive rules that govern the matter of human rights. The thrust of Islamic jurisprudence and Shari ‘a seems to clearly accommodate the basic necessary rules that create for the flourishing of the Family.

The evolution of these norms and concepts in the international legal field has been such that, in respect of crucial details, there is a visible tendency to have the rights of the Family give up some of its historical and inherent hierarchal position and status in the society to specific and newly developed “rules” in the broader field of human rights. The problem that we are thus faced with is simple. Some of the Muslim Family Law reforms that are currently advocated by a sizeable segment of liberal based ideologues are such that the aim to denude the very foundations of the institution of the family as to adversely affect its well-being and character.

Undeniably the positive role that Faith and Religion play in the public life of any community is tremendously immense. Even amongst the most “progressive societies” of modern times the relevance of Faith can never be exaggerated. Given the peculiar political and societal realities of this millennium, in the Third World context Islam’s significance needs to be specially noted. The perennial support that Family as an institution has evinced from confines of doctrinaire Islam is by itself comprehensive both legally and sociologically! An understanding of this fact would provide us with a true glimpse of the rationale why Muslim countries are always advocating the continued historical continuity of the Family as the core and fundamental group unit of our civilizations, regardless of the nature of Religion of the concerned communities

These are a few prominent areas within the Muslim Family laws requiring attention of scholars, experts, religious leaders and governments for undertaking “reforms”. The “reform” movement that is needed has to be well coordinated and of course led by profound scholarship. Anything less than quality would be self defeating. So this reform movement has to be undertaken with lot of planning, and a determined yet sincere effort to have the kind of imagination that achieves dynamic advances without creating the expected opposition from adversary ideologies.

This research is therefore integral to understanding the actual practice of MFL with a view to implementing effective reforms. Only detailed and systematic study of how MFL affects the daily lives and social relationships of actual men, women and children, of how people adjust to and cope with the consequences of the application of the law will give  the insights which is need for devising and implementing reform initiatives. Such studies are also testing the relevance and efficacy of reform initiatives already attempted in different parts of the world.

fiqh—Islamic jurisprudence and legal rulings. Fiqh typically refers to the legal rulings of the four madhahib.

hadith—the “traditions,” parables from the life of the prophet Muhammad, indicating what he said, did, and approved of in others around him. Along with the Qur’an, the hadith form the main basis for Islamic law.

’idda—a waiting period after a woman divorces, usually about three months (but longer if she is pregnant).

khul’—a means by which a woman may obtain a divorce through payments to her husband (usually repayment of some or all of her mahr).

madhhab (pl. madhahib)– schools of thought on Islamic law. There are four madhahib in Sunni Islam: Hanafi, Maliki, Shafi’i, and Hanbali. Shi’a religious law is sometimes referred to as a fifth madhhab, Ja’fari.

mahr—the dowry paid by a groom to his bride at the time of marriage.

mata’a—compensation paid by the husband to the wife after talaq or if fault for the divorce lies with the husband.

shari’a—canonical Islamic law drawn from the Qur’an and the hadith.

talaq—repudiation of marriage (Islamic divorce). Talaq can mean divorce in any form. A particular Islamic divorce, called triple talaq, whereby a husband proclaims “talaq” to his wife three times to divorce her, is particularly controversial. If a husband delegates his right to talaq, to his wife or to a third party, this is called talaq tafwid. The delegation can occur at the time of marriage or in a subsequent agreement.

ta’liq—conditional divorce, with the conditions usually set at the time of marriage.

wali—legal guardian. The wali must be male and is typically the father (or the grandfather if the father is deceased); however, the wali may be any male relative.

Knowing Our Rights, Women, family, laws and customs in the Muslim World,” Women living under Muslim Laws, pp. 262 and 269