A non-governmental organization (NGO) is a type of non-profit organization that works to promote human good while operating separately from any national government. The definition of an NGO varies slightly from nation to nation, but most NGOs fall within this framework. Because of the somewhat nebulous definition, the total number of NGOs worldwide is unknown, with a wide range of estimates available. 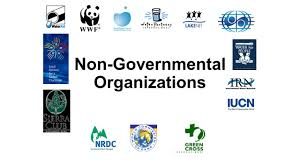 Sometimes the term is used as a synonym of “civil society organization” to refer to any association founded by citizens, but this is not how the term is normally used in the media or everyday language, as recorded by major dictionaries.

The explanation of the term by NGO.org (the non-governmental organizations associated with the United Nations) is ambivalent. It first says an NGO is any non-profit, voluntary citizens’ group which is organized on a local, national or international level, but then goes on to restrict the meaning in the sense used by most English speakers and the media: Task-oriented and driven by people with a common interest, NGOs perform a variety of service and humanitarian functions, bring citizen concerns to Governments, advocate and monitor policies and encourage political participation through provision of information.

NGOs are usually funded by donations, but some avoid formal funding altogether and are run primarily by volunteers. NGOs are highly diverse groups of organizations engaged in a wide range of activities, and take different forms in different parts of the world. Some may have charitable status, while others may be registered for tax exemption based on recognition of social purposes. Others may be fronts for political, religious, or other interests. Since the end of World War II, NGOs have had an increasing role in international development, particularly in the fields of humanitarian assistance and poverty alleviation.

The term ‘NGO’ is not always used consistently. In some countries the term NGO is applied to an organization that in another country would be called an NPO (non-profit organization), and vice versa. Political parties and trade unions are considered NGOs only in some countries. There are many different classifications of NGO in use. The most common focus is on “orientation” and “level of operation”. An NGO’s orientation refers to the type of activities it takes on. These activities might include human rights, environmental, improving health, or development work. An NGO’s level of operation indicates the scale at which an organization works, such as local, regional, national, or international.

One characteristic these diverse organizations share is that their non-profit status means they are not hindered by short-term financial objectives.

A non-governmental organization (NGO) is a non-profit, citizen-based group that functions independently of government. NGOs, sometimes called civil societies, are organized on community, national and international levels to serve specific social or political purposes, and are cooperative, rather than commercial, in nature.

Two broad groups of NGOs are identified by the World Bank:

Certain NGOs may fall under both categories simultaneously.

Examples of NGOs include those that support human rights, advocate for improved health or encourage political participation.

While the term “NGO” has various interpretations, it is generally accepted to include private organizations that operate without government control and that are non-profit and non-criminal. Other definitions further clarify NGOs as associations that are non-religious and non-military.

Some NGOs rely primarily on volunteers, while others support a paid staff.

How NGOs are Funded

As non-profits, NGOs rely on a variety of sources for funding, including:

Despite their independence from government, some NGOs rely significantly on government funding. Large NGOs may have budgets in the millions or billions of dollars.

A number of NGO variations exist, including:

A non-governmental organization (NGO) is any non-profit, voluntary citizens’ group which is organized on a local, national or international level. Task-oriented and driven by people with a common interest, NGOs perform a variety of service and humanitarian functions, bring citizen concerns to Governments, advocate and monitor policies and encourage political participation through provision of information. Some are organized around specific issues, such as human rights, environment or health. They provide analysis and expertise, serve as early warning mechanisms and help monitor and implement international agreements.

Their relationship with offices and agencies of the United Nations system differs depending on their goals, their venue and the mandate of a particular institution.

One of the earliest mentions of the term “NGO” was in 1945, when the UN was created. The UN introduced the term “NGO” to distinguish between the participation of international private organizations and intergovernmental specialized agencies. According to the UN, all kinds of private organizations that are independent from government control can be recognized as “NGOs.” “NGOs” cannot seek to diminish a nation’s government in the shape of an opposing political party; NGOs also need to be non-criminal and non-profit. Professor Peter Willets, from the City University of London, argues the definition of NGOs can be interpreted differently by various organizations and depending on a situation’s context.