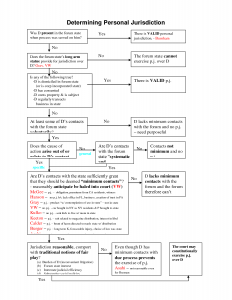 Personal jurisdiction refers to the power that a court has to make a decision regarding the party being sued in a case. Before a court can exercise power over a party, the U.S. Constitution requires that the party has certain minimum contacts with the forum in which the court sits.  International Shoe v Washington, 326 US 310 (1945). So if the plaintiff sues a defendant, that defendant can object to the suit by arguing that the court does not have personal jurisdiction over the defendant.

Typically for a court to have personal jurisdiction over a defendant, the plaintiff needs to serve the defendant in the state in which the court sits, and the defendant needs to voluntarily appear in court.

Federal Rules of Civil Procedure Rule 4(k) describes whether a state’s courts would have the authority to adjudicate a claim as it relates to personal jurisdiction.

Since there is no world government which all countries recognize to arbitrate disputes over jurisdiction, sovereign powers can find themselves in conflict over which is the more appropriate venue to hear a case, or which country’s laws should apply. These conflicts are sometimes resolved de facto by physical factors, such as which country has physical possession of a defendant or property, or sometimes by use of physical police or military force to seize people or property. A country with loose rule of law – for example an absolute monarchy with no independent judiciary – may arbitrarily choose to assert jurisdiction over a case without citing any particular justification. Such assertion can cause problems, such as encouraging other countries to take arbitrary actions over foreign citizens and property, or even provoking skirmishes or armed conflict.

In practice, many countries operate by one or another principles, either in written law or in practice, which communicate when the country will and will not assert jurisdiction.

Different principles are applied by different countries, and different principles may be applied by the same country in different circumstances. Determination of whether or not a court has jurisdiction to hear a case is the first stage of a conflict of laws proceeding, potentially followed by choice of law to determine which jurisdiction’s laws apply. Executive prosecutorial authority and foreign policy also play a role in scope and practical impact of jurisdiction choices.

When a person commits a crime in a foreign country against the laws of that country, usually the host country is responsible for prosecution. The Vienna Convention on Consular Relations requires that the host country notify the foreign embassy, potentially allowing the foreign country to assist in legal defense and monitor conditions of detention. (Most countries protect their citizens against foreign powers in general.)

Foreign diplomats enjoy diplomatic immunity in many countries based on the Vienna Convention on Diplomatic Relations or bilateral agreement, and foreign military personnel may be subject to the jurisdiction of their home country based on a status of forces agreement or Visiting Forces Agreement.

If a person is not physically present in the country which wishes to prosecute a case, that country may either wait until the person enters the national territory, or pursue extradition by legal or extralegal means, and with or without a general extradition treaty. Some countries (like China) prefer to prosecute their own citizens for crimes committed abroad rather than extradite them. Other countries defer to the host country.

History in English and U.S. law

The concept of personal jurisdiction in English law has its origin in the idea that a monarch could not exercise power over persons or property located outside of his or her kingdom. To some degree, this was a de facto rule; the monarch’s men could not arrest people or seize property outside the kingdom without risking physical conflict with the soldiers and police of other kingdoms. Slowly this principle was incorporated into written law, but problems arose in cases where property owners could not be sued because they had left the kingdom or had died and therefore were not present within the kingdom at the time they were being sued. To solve this problem, the courts created another type of jurisdiction, called quasi in rem, that is, jurisdiction over the land itself, even if the person who owned the land was not in the country. However, this jurisdiction was limited to the settlement of debts owed by the owner of the land.