personality disorder is a type of mental disorder in which you have a rigid and unhealthy pattern of thinking, functioning and behaving. A person with a personality disorder has trouble perceiving and relating to situations and people. This causes significant problems and limitations in relationships, social activities, work and school. 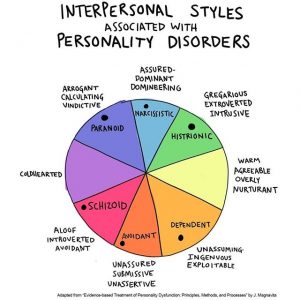 In some cases, you may not realize that you have a personality disorder because your way of thinking and behaving seems natural to you. And you may blame others for the challenges you face.

Personality disorders are a class of mental disorders characterized by enduring maladaptive patterns of behavior, cognition, and inner experience, exhibited across many contexts and deviating markedly from those accepted by the individual’s culture. These patterns develop early, are inflexible, and are associated with significant distress or disability. The definitions may vary somewhat, according to source.

Official criteria for diagnosing personality disorders are listed in the Diagnostic and Statistical Manual of Mental Disorders, published by the American Psychiatric Association, and in the mental and behavioral disorders section of the International Statistical Classification of Diseases and Related Health Problems, published by the World Health Organization. The DSM-5 published in 2013 now lists personality disorders in exactly the same way as other mental disorders, rather than on a separate ‘axis’ as previously. 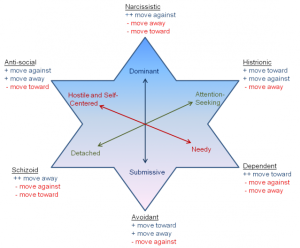 These behavioral patterns in personality disorders are typically associated with substantial disturbances in some behavioral tendencies of an individual, usually involving several areas of the personality, and are nearly always associated with considerable personal and social disruption. A person is classified as having a personality disorder if their abnormalities of behavior impair their social or occupational functioning. Additionally, personality disorders are inflexible and pervasive across many situations, due in large part to the fact that such behavior may be ego-syntonic (i.e. the patterns are consistent with the ego integrity of the individual) and are, therefore, perceived to be appropriate by that individual. This behavior can result in maladaptive coping skills, which may lead to personal problems that induce extreme anxiety, distress, or depression. These patterns of behavior typically are recognized in adolescence and the beginning of adulthood and, in some unusual instances, childhood.

Personality is the combination of thoughts, emotions and behaviors that makes you unique. It’s the way you view, understand and relate to the outside world, as well as how you see yourself. Personality forms during childhood, shaped through an interaction of:

Personality disorders are thought to be caused by a combination of these genetic and environmental influences. Your genes may make you vulnerable to developing a personality disorder, and a life situation may trigger the actual development.