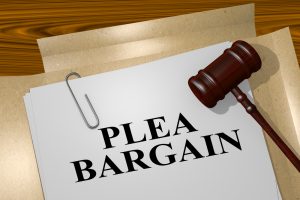 A plea bargain allows both parties to avoid a lengthy criminal trial and may allow criminal defendants to avoid the risk of conviction at trial on a more serious charge. For example, in the U.S. legal system, a criminal defendant charged with a felony theft charge, the conviction of which would require imprisonment in state prison, may be offered the opportunity to plead guilty to a misdemeanor theft charge, which may not carry a custodial sentence.

In cases such as an automobile collision when there is a potential for civil liability against the defendant, the defendant may agree to plead no contest or “guilty with a civil reservation”, which essentially is a guilty plea without admitting civil liability.

Plea bargaining can present a dilemma to defense attorneys, in that they must choose between vigorously seeking a good deal for their present client, or maintaining a good relationship with the prosecutor for the sake of helping future clients. However, defense attorneys are required by the ethics of the bar to defend the present client’s interests over the interests of others. Violation of this rule may result in disciplinary sanctions being imposed against the defense attorney by the appropriate state’s bar association.

‘Plea Bargaining’ can be of two types. Charge bargain  and sentence bargain. Charge bargain happens when the prosecution allows a defendant to plead guilty to a lesser charge or to only some of the charge framed against him. Prosecution generally has vast discretion in framing charge and therefore they have the option to charge the defendant with the highest charges that are applicable. ‘Charge Bargain’ gives the accused an opportunity to negotiate with the prosecution and reduce the number of charges that may have framed against him. As far as sentence bargain is concerned, it happens when an accused or defendants is told in advance what his sentence will be if he pleads guilty. A sentence bargain may allow the prosecutor to obtain a conviction in the most serious charge, while assuring the defendant of an acceptable sentence.

The System of Plea Bargaining  Operate

For this topic it would be helpful to discuss the Indian provisions of plea bargaining. A new Chapter, that is chapter XXLA on ‘Plea Bargaining; has been introduced in the Criminal Procedure Code. It was introduced through the Criminal Law (Amendment) Act, 2005. Features of this scheme are as under:

(i)  A person accused of an offence may file an application for Plea Bargaining in the court in which such offence is pending for trial.

(ii) The court, on receiving the application, must examine the accused in camera to ascertain whether the application has been filed voluntarily. The court must then issue notice to the Public Prosecutor or the complainant to work out a mutually satisfactory disposition to the case. The negotiation of such a mutually acceptable settlement is left to the free will of the prosecution (including the victim) and the accused. The complainant and the accused are given time to work out a mutually satisfactory disposition of the case, which may include giving to the victim by the accused, compensation and other expenses incurred during the case.

(iii) Where a satisfactory disposition of the case has been worked out, the Court shall dispose of the case by sentencing the accused to one-fourth of the punishment provided or extendable, as the case may be for such offence. If a settlement is reached, the court can award compensation based on it to the victim and then hear the parties on the issue of punishment. The court may release the accused on probation if the law allows for it; if a minimum sentence is provided for the offence committed, the accused may be sentenced to half of such minimum punishment; if the offence committed does not fall within the scope of the above, then the accused may be sentenced to one-fourth of the punishment provided or extendable for such offence. The accused may also avail of the benefit under Section 428 of the Code of Criminal Procedure, 1973 which allows setting off the period of detention undergone by the accused against the sentence of imprisonment in plea-bargained settlements.

(v) Once the court passes an order in the case of ‘Plea Bargaining’ no appeal shall lie to any court against that order.

(i)  Those offences affecting socio-economic conditions of this country, which the Government would notify.

(iii) The opportunity of plea bargaining will not be available to habitual offenders.

(iv) The third consists of offences committed against children below the age of 14. Despite such vast areas of exclusion there are many offences for which the accused will be entitled to avail themselves of the advantages of plea bargain.

Although the Indian Supreme Court has time and again blasted the concept of plea bargaining when the Government introduced the concept in the CrPC in line with the recommendation of the Law Commission, the court stated in Rajinder Kumar Sharma and Anr v. The State that the legislature has introduced plea bargaining under law so as to benefit such accused persons who repent upon their criminal act and are prepared to suffer some punishment for the act. The purpose of plea bargaining is also to see that the criminals who admit their guilty and repent upon, a lenient view should be taken while awarding punishment to them. The statement of objects and reasons in the Indian Bill on Plea Bargaining  specifies that the disposal of criminal trials in the courts takes considerable time and that in many cases trial do not commence for as long as 3 to 5 years after accused was remitted to judicial custody. Plea bargaining although not recognized by the criminal jurisprudence, it is seen as an although method to deal with the huge arrears of criminal cases.

In Bangladesh the need and objects of introducing plea bargaining may be viewed from the following four aspects:

(ii) From the viewpoint of the accused person;

(iii) From the viewpoint of the prosecutors; and

(iv) From the viewpoint of the victim of the offence.