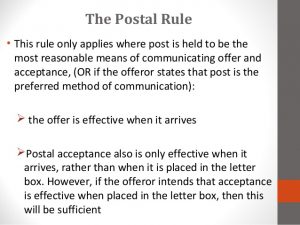 A rule of contract law that makes an exception to the general rule that an acceptance is only created when communicated directly to the offeror.

The postal rule is a historical ruling, which came about in a time where the main and quickest form of business communication was by post. Through the decades other forms of communication have been invented which are now much speedier – telex, phone , fax and now instant messaging and email. Central requisites to the forming of a contract are those of offer and acceptance. The general rule in law states that acceptance is communicated, and has been received by the offeror . The ruling applies where the means of communication are deemed instantaneous Entores Ltd v Miles Far East Corpn (1955).

A rule of contract law that makes an exception to the general rule that an acceptance is only created when communicated directly to the offeror.

An acceptance is binding and the contract is said to be perfected when the acceptor places this acceptance in the mail box for return mail even if, in fact, it never reaches the offeror.

The exception to this rule is the Postal Rule.

Where post is the requested form of communication between parties or where it is an appropriate and accepted means of communication between parties, acceptance is complete as soon as the letter is posted. Even if the letter was mislaid or lost and does not reach the offeror. It is a requirement that the letter of acceptance has been properly posted London and Northern Bank (1900). It is found telegrams also fall under the postal rule.

An issue that rises from the Postal rule is that there is a period of time, where person(s) are in the dark as to whether a contract is in existence or not. Courts have decided that the offeror assumes all the risk, as the offer is still open during the time the letter of acceptance is in the post Adams v Lindsell(1818).

The decision was based on the fact that an acceptance of an offer could go on ad infinitum, back and forth between the parties. If one had to acknowledge the receipt and then the acknowledgment had to be acknowledged so on and so forth.

summarized it as follows:

“Where the circumstances are such that it must have been within the contemplation of the parties that, according to the ordinary usages of mankind, the post might be used as a means of communicating the acceptance of an offer, the acceptance is complete as soon as it is posted.”

For more on this case and others, and on the postal rule, see “Offer and Acceptance” in the Contract Law section.

In Yates Building Co v RJ Pulleyn (1975) the acceptance was to be sent by “registered or recorded delivery post”. The plaintiff sent his acceptance by through the standard post service. The defendant refused to accept the bid as it was not sent to them by the methods as they had outlined in the offer. The courts found that there was a binding contract in place with the receipt of the acceptance by letter. This ruling was appealed and the court further outlined the findings by stating the offeror did not state that the only method of acceptance as outlined would be binding.

Another area the postal rule was rigorously tested was where the original offer was withdrawn or revoked. When does the revocation come into effect under the postal rule?

Under the postal rule, the letter of acceptance is relevant on posting. Letters communicating revocation come into effect only when the letter revoking the offer is delivered. Key case dealing with revocation under the postal rule is Byrne v Van Tienhoven (1880). The judges ruled in this case in favour of the plaintiff. The judges ruled it was proven by the plaintiff they had accepted the original offer by posting a response to the defendant. The letter of revocation was received after their letter of acceptance had been posted by the plaintiff.

A contract is a legal binding agreement between two or more parties. It has been classed as the most important legal mechanism in business. When drawing up a contract, some of the main elements that contribute to that document being legally binding are:

Courts could find that some contracts are invalid if any of the essential criteria that defines a contract are missing. The contracts can be deemed:

Contracts can be made through different forms of communication – orally, written or implied by conduct.

It is generally accepted that an offer starts the process of a contract coming into existence. An offer is a expression of willingness to do business on certain terms / conditions. Offers must be communicated person(s) need to know the existence of an offer in order to provide an acceptance. Offers can be specific or general. Specific denoting the offer is made to a specific person or persons, which can only be accepted by the person(s) it was addressed to. Boulton v Jones (1857). A general offer is made to the community at large, and anyone who feels they can fulfil the terms of the offer can submit an acceptance. Carlill v The Carbolic Smokeball Company (1893).

The person who made the offer must receive the acceptance. Silence cannot be deemed a format of communication even if agreed by the offeror, but acceptance by conduct is acknowledged by the courts if the offeror deems other forms of communication are waived ,Brogdan v Metropolitan Railway(1877), Trentham Ltd v Archital Luxfer(1993).

There is one rule when this does not apply, where post or telegram is used as the form of communication. Known as the postal rule. If the acceptance is communicated through post or telegram, it is deemed the offer has been accepted once the letter of acceptance has been posted Adams v Lindsell(1818), the letter or telegram must be correctly addressed and stamped and posted for this rule to be effective. The postal rule can be overturned where the offer stipulates that the acceptance must be received in a certain manner.

It is assumed most commercial contracts are intended to be legally binding. If a party is not happy in an agreement and tries to get the contract annulled, the onus is on them to prove the contract has no legal standing. Some enter clauses to the effect that the agreement would not be binding in a court of law, instance where you find this today would be competitions in newspapers, with the inclusion of the clause “ editors decision is final”. Key case relating to the issue of creating legal intentions is Rose & Frank Co v JR Crompton & Bros(1925 where a honour clause was written into an agreement. When a dispute arose the courts stated the defendants Rose had to honour the outstanding orders placed on them by the plaintiffs JR Crompton, as they had been accepted but did not have to continue with the agreement or accept any new orders.

A requirement for all enforceable contract’s with the exception of those made under deed or seal. Consideration is recognised as a value or price agreed between two parties that allows them to enter into a contract. In the case Currie v’s Misa(1875) the courts defined consideration as “some right, interest, profit or benefit accruing to the one party, or some forebearance, detriment, loss or responsibility given, suffered or undertaken by the other…. “ where the words benefit accruing and detriment are in fact in return of a promise received or given. Therefore consideration has to be in every contract. If it is proved that there is no consideration then it is considered by the law that there is no contract between the parties.

Value or price does not imply payment by monies only. Money is not the only form of value to be recognised under consideration. Other forms of value that can be considered are, forbearance, agreeing to a right or goods/service. With forbearance a party gives up a specific right (waiver your right to sue). Agreeing to a right – could relate to a right of way or access to ones property.

Consideration can be classed in two ways: