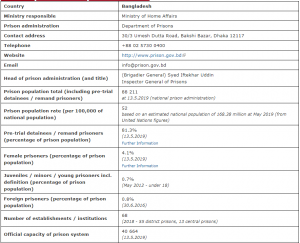 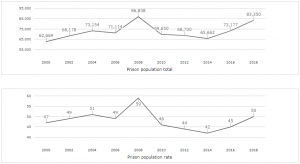 About fifty thousand prisoners are accommodated in these jails. But in reality more than one lakh prisoners live in prison cells. All prisoners are not guilty. But the majority is under trial. Besides the jails, there are many correction centres in our country and many children’s and women are sent to these correction centres. From a report in 1998, we get a report of 34 children, who have been taken to Dhaka Central Jail. All 34 were not found guilty. Among the list, 24 were found innocent. The remaining alleged 10 were detained in the name of safe custody. On the other hand, among the innocent 24 were born in prison cell, just they were new born babies, of their detained mothers and remaining 20 accompanied their alleged mothers. We generally find three categories of captives in jail. The first category belongs to the convicted, the second one belongs to judicial trial and the last one is categorized as safe custody. How these people are dealt in jail and how they are treated by the jail authorities are the subjects under study.

The Inspector General of Prisons, Brigadier General Md Zakir Hasan, recently discussed current jail conditions with POLOFF, and described his efforts to reform the prison system in Bangladesh. According to Hasan, the total prison population in Bangladesh (including those in jail awaiting trial, but not those detained in police stations) is approximately 86,100, which is 3.5 times greater than the country’s maximum prison capacity.(SBU) Brigadier General Md Zakir Hasan, the Inspector General of Prisons, recently discussed prison conditions and his ongoing reform of the prison system with POLOFF. As the top Bangladesh government official overseeing the prison system, Hasan runs a network of 67 prisons across the country. He assumed his position in 2005. Prior to his appointment, the Inspector General position was traditionally held by a military officer from the medical corps. Hasan is the first infantry officer to hold the job.(SBU) Hasan provided statistics on the current prison population. He said he receives daily reports on how many prisoners have entered and departed the system, and that the current total number of prisoners that day was about 88,500. This number has been relatively stable for several months, after having risen from 72,000 at the beginning of the state of emergency in January. Between 1,150 and 1,200 prisoners enter and leave the system every day. (NOTE: These statistics match estimates by the Bangladesh Society for the Enforcement of Human Rights and the Bangladesh office of the International Committee of Red Cross and Red Crescent Societies. END NOTE.). (SBU) The prison population is currently 3.5 times over its maximum capacity of 27,000. Hasan has sought to shift prisoners around to relieve the most crowded jails, in Dhaka and other major cities, but it can be difficult because prisoners often must appear in court in the city where they were convicted. Hasan hopes to increase the prison capacity by several thousands slots this year, and will be inaugurating a new prison in Chuaganga in northwestern Bangladesh in the middle of September.

(SBU) According to Hasan, when he took over the prison system in 2005 corruption was rampant, prisoners were routinely abused, and prison employees’ morale was abysmal. “My first thought was that prisons cannot be punishment centers, they have to be rehabilitation centers,” he said. He said he noticed quickly that the prisons held not just bad people, but also many victims of circumstance, poorly educated people, and political prisoners who were involved in local disputes. “My job, as I saw it, was to rehabilitate them since these people are still a segment of society.”

(SBU) Hasan said he saw firsthand major problems in the way the prisons were being run. There was no mutual respect, either amongst prisoners or between prison employees, and training for guards was non-existent. Prisoners had to bribe the guards for the rations they were entitled to, and were routinely placed in “bar-fitters” (a bar that connects ankle-cuffs and hand-cuffs) which were supposed to be reserved only for transporting prisoners. (SBU) The Inspector General described a series of reforms he has initiated since 2005. He introduced several measures aimed at improving employee training and morale, including introducing a new uniform, revising the training program, creating a health program for employees’ families modeled on that of the military, and helping to subsidize their children’s education. To address rampant corruption, he created an intelligence service within the prisons to report on abuse and bribery and to monitor prison conditions. He also managed to remove syndicates from the business of supplying prisons, a move that ran afoul of the members of parliament that ran them. (NOTE: Several of these MPs petitioned the Home Minister unsuccessfully for Hasan’s removal. END NOTE.) To improve communication and promote more transparency, he instituted monthly “dharbars” or public meetings for prisoners and employees in each of the 67 prisons, presided over by the head of the prison to discuss problems and concerns without fear of retribution. Hasan also pushed through a major overhaul of the country’s jail code, which governs how the prison system is operated. (SBU) To provide skills for prisoners, Hasan formalized what had been ad hoc literacy classes, with educated prisoners as teachers. He started creating canteens staffed by prisoners, and opened a bakery, beauty salon, and electronic repair service in the Dhaka Central Prison to put prisoners to work. He acknowledged that poor conditions persist and that many of the changes are taking a long time to implement.

In general, the criminal codes and procedures in effect in Bangladesh derive from the period of British rule, as amended by Pakistan and Bangladesh. These basic documents include the Penal Code, first promulgated in 1860 as the Indian Penal Code; the Police Act of 1861; the Evidence Act of 1872; the Code of Criminal Procedure of 1898; the Criminal Law Amendment Act of 1908; and the Official Secrets Act of 1911.

The major classes of crimes are listed in the Penal Code, the country’s most important and comprehensive penal statute. Among the listed categories of more serious crimes are activities called “offenses against the state.” The Penal Code authorizes the government to prosecute any person or group of persons conspiring or abetting in a conspiracy to overthrow the government by force. An offense of this nature is also defined as “war against the state.” Whether or not an offense constitutes a conspiracy is determined by the “intent” of the participant, rather than by the number of the participants involved, so as to distinguish it from a riot or any other form of disturbance not regarded as antinational. Section 121 of the Penal Code makes antinational offenses punishable by death or imprisonment for twenty years. The incitement of hatred, contempt, or disaffection toward a lawfully constituted authority is also a criminal offense punishable by a maximum sentence of life imprisonment. Among other categories of felonies are offenses against the public tranquility (meaning unlawful assembly), rioting, and public disturbances; offenses relating to religion; and offenses against property, such as theft, robbery, and dacoity (robbery by a group of five or more persons).

Punishment is divided into five categories: death; punishment, ranging from seven years to life; imprisonment; forfeiture of property; and fines. The imprisonment may be “simple” or “rigorous” (hard labor), ranging from the minimum of twenty-four hours for drunken or disorderly conduct to a maximum of fourteen years at hard labor for more serious offenses. Juvenile offenders may be sentenced to detention in reform schools for a period of three to seven years. For minor infractions whipping, not exceeding fifteen lashes, may be prescribed as an alternative to detention.

Preventive detention may be ordered under the amended Security of Pakistan Act of 1952 and under Section 107 of the Code of Criminal Procedure when, in the opinion of the authorities, there is a strong likelihood of public disorder. Bangladeshi regimes have made extensive use of this provision. Similarly, Section 144 of the Code of Criminal Procedure, frequently invoked by magistrates for periods up to two months, prohibits assembly of five or more persons, holding of public meetings, and carrying of firearms. In addition, the Disturbed Areas (Special Powers) Ordinance of 1962 empowers a magistrate or an officer in charge of a police contingent to open fire or use force against any persons breaching the peace in the disturbed areas and to arrest and search without a warrant. The assembly of five or more persons and the carrying of firearms may also be prohibited under this ordinance.

Persons charged with espionage are punishable under the Official Secrets Act of 1911, as amended in 1923 and 1968. As revised in May 1968, this statute prescribes death as the maximum penalty for a person convicted of espionage. In 1966, in an effort to prevent information leaks, the central government passed a regulation prohibiting former government officials from working for foreign diplomatic missions. In general, all persons seeking employment with foreign embassies or any foreign government agencies were also required to obtain prior permission from Bangladeshi authorities.

The custody and correction of persons sentenced to imprisonment is regulated under the Penal Code of 1860, the Prisons Act of 1894, and the Prisoners Act of 1900, as amended. The prison system has expanded but in 1988 was basically little changed from the later days of the highest jail administration official is the inspector general of prisons or, if this office is not separately assigned, the inspector general of police. At the division level or the police range level, the senior official is called director of prisons; at the district level, he is the jail superintendent. Below the district jail level are the subdistrict and village police lockups. Dhaka Central Jail is the largest and most secure prison and has more extensive facilities than those at the successive lower echelons. All installations are staffed by prison police usually permanently assigned to this duty. In general, prisons and jails have low standards of hygiene and sanitation and are seriously overcrowded. Rehabilitation programs with trained social workers were rudimentary or nonexistent through the late 1980s. Overcrowding–the most serious basic problem–was likely to worsen as the 1990s approached because of the mounting number of arrests connected with opposition campaigns to oust Ershad from office.