On June 26, 2015, the U.S. Supreme Court handed down a landmark decision in the case of Obergefell v. Hodges, recognizing that same-sex couples have access to the same marriage rights as their opposite-sex counterparts throughout the country. All state laws banning same-sex marriage were overruled by the Court’s decision.

This article provides a basic overview of the 2015 Supreme Court case legalizing same-sex marriage at the federal level. 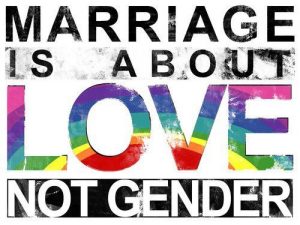 The state of same-sex marriage in America has been constantly evolving. From its early beginnings, both proponents and opponents of same-sex marriage have asserted controversial arguments concerning the definition, application, and legality of marriage as it applies to men and women of the same-sex.

Ever since 2003, when Massachusetts became the first state to legalize same-sex marriage, legislatures in many states have been called to answer the same call. While legal issues concerning same-sex marriage continued to grow, so did the number of states that allowed same-sex marriage.

Now, the issue is settled. Same-sex marriage is legal in all fifty states across the country.

In a 5-4 decision, the Court held that the Fourteenth Amendment requires states to permit same-sex marriages within their boundaries, and recognize the marriages of same-sex citizens from other states. Justice Kennedy, who wrote the majority opinion, referenced an earlier Supreme Court case overturning discriminatory anti-sodomy laws:

“Decisions about marriage are among the most intimate that an individual can make. This is true for all persons, whatever their sexual orientation.”

All four of the court’s most conservative members — Chief Justice John G. Roberts Jr. and Justices Antonin Scalia, Clarence Thomas, and Samuel A. Alito Jr. — dissented and wrote separate opinions, suggesting the court had usurped a power that belongs to the people. Most notably, Justice Scalia called the decision a “threat to American democracy,” saying it was “constitutional revision by an unelected committee of nine.”

The Court’s action marks the culmination of an unprecedented upheaval in public opinion and the nation’s jurisprudence. Advocates called it the most pressing civil rights issue of modern times, while critics said the courts had sent the country into uncharted territory by changing the traditional definition of marriage.

Almost 46 years to the day after a riot at New York’s Stonewall Inn ushered in the modern gay rights movement, the decision helped settle one of the major civil rights fights of this era. Supreme Court Justice Anthony M. Kennedy wrote for the majority and spoke of the most fundamental values of family, love and liberty in his opinion.

“No union is more profound than marriage, for it embodies the highest ideals of love, fidelity, devotion, sacrifice and family,” Kennedy wrote. “In forming a marital union, two people become something greater than they once were.”

The decision in Obergefell expressly overruled the Court’s only prior direct ruling on same-sex marriage — a one-line decision made in the 1972 case of Baker v. Nelson, declaring that a claim to such marriage did not raise “a substantial question” for the Court to resolve.

Effects of the Decision in Obergefell vs. Hodges

The decision will open marriage legally in all fifty states and will give new legal protections for those who got married under court rulings. Those whose marriages could not be considered truly final until the Supreme Court had decided this case may now finalize their matrimonial unions.

The decision nullified bans on same-sex marriage as well as bans on official recognition of such marriages performed outside a state. Both prohibitions, the court said, violate the Fourteenth Amendment’s guarantees of due process and equal protection. Same-sex spouses now have the same rights and benefits as legally married, opposite-sex couples, including tax relief, emergency medical decision-making power, access to domestic relations laws, spousal benefits (including workers’ compensation), inheritance rights, and spousal testimonial privilege.