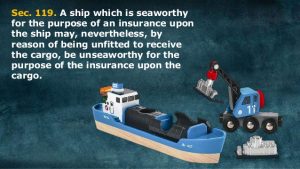 In almost all shipping and carriage of goods by sea cases the issue of seaworthiness is considered the corner stone in these cases. It importance comes from the fact of its direct relation with both the commercial law and maritime law. Seaworthiness affects the liability of the carrier, the marine insurance, the environment and many issues related to carriage of goods by sea.

The ISM Code and Hague/Hague Visby Rules lay down standards and procedures for seaworthiness of the ship which if the carrier fail to meet, he will not be able to use the exception provided to him.

This paper is going to discuss the seaworthiness in the context of supporting the arguments of both the ship owner and the cargo owner regarding their claims. It will also analyse whether the owners of the ship are liable for the damaged cargo and if they were, what their liability would amount to and will explain briefly the applicable insurance cover in this case.

On a windy morning in November, A product carrier had completed loading a full cargo of marine diesel oil, the master had signed and issued the original Bill of Lading to the shippers, the master ordered Mr. Karlsson an able bodied seaman, to perform routine soundings of all ballast tanks, As part of the standard procedures before the vessel’s departure, he recorded the result of the sounding at the no. 1 port wing as quickly as he could, Then he moved on to the next tank but in replacing the lid of the sounding pipe he only put it in place rather than screwing it on properly.

When the vessel reached the open sea encountered quite heavy seas and the on-coming waves. The master of the ship anchored in the bay to seek shelter. A quick check showed that the draft forward had increased by almost one meter. Further checks revealed that the air vent to the no. 1 centre tank was damaged, As a result of the damaged air intake, seawater had entered the no.1 centre tank as well and contaminated 2,150 tonnes of cargo in that tank.

As a result of these events Gdansk Oil Distributors Inc. (GODI), as holders of the Bill of Lading, sued the Owners of the m/t Fully Laden demanding compensation for the value of the damaged cargo at USD 620/tonne.

The shipowner can argue that the ship was seaworthy, and in accordance with the requirement of the Hague/Hague Visby Rules Art III rule.1 (b) he manned the ship with competent crew and provided procedures for the crew to be follow which is consistent with Safety Management System under the ISM Code. Hence, not screwing the blast pipe lid was due to negligence from the seaman to carry his duty and that pours in the mismanagement of the ship. Especially that he performed the procedure of taking the ballast tank reading while the pilot was onboard the ship, and at that time the ship-owner was in no position to check whether the seaman had screwed the lid of the ballast pipe or not. Thus the shipowner can urge his right to be exempted from the liability under the exculpatory exception under the Hague/Hague Visby Rules Article IV.2. (a).

The shipowner can also use the argument of the peril of the sea according to The Hague/Hague Visby Rules Article IV.2. (c). for the reason that no person was allowed to go on deck even moving on the open deck was not possible and, consequently, the crew could not perform the regular rounds to check the deck equipment and fittings due to the severely rough weather.

Another argument available is that the damage to the air intake was a Latent defects not discoverable by due diligence. And in this case he should be exempted from liability under the Hague/Hague Visby Rules Article IV.2. (p). shipowner may also use the exemption provided in The Hague/Hague Visby Rules Article IV.2. (d).which is the Act of God for his argument, since remedying the problem can not take place under the circumstances. The shipowner can argue that he exercised due diligence in the selection and training of the crew to comply with all the duties required by the ISM Code. Thus, he is not responsible for their negligence.

The consignee Gdansk Oil Distributors Inc. (GODI), as holders of the Bill of Lading, argument will be based on the unseaworthiness and can use the Hague Visby Rules Article III.1, which deals with the obligation of carrier to provide a seaworthy ship. The consignee also can argue that the shipowner was not due diligent before and at the time of the voyage, thus (the shipowner) is liable for the damage caused by the unseaworthiness of the ship due to lack of due diligence on the part of the shipowner.

Seaworthiness is the main issue in this case, and to be able to understand this case we need to define seaworthiness. In Dixon v. Sadler case, seaworthiness was defined as: “she (the vessel) shall be in a fit state as to repairs, equipment, and crew and in all other respects to encounter the ordinary perils of the voyage” (Kassem, 2006).

In Article III.1 of Hague/Hague Visby Rules seaworthiness was defined in details. Firstly, the physical seaworthiness of the ship itself, that is the physical shape of the ship which should be fit in all aspects to carry the intended voyage, the manning of the ship and this implies a competent crew, the adequacy of the equipments and the ships supply. Secondly, the cargo seaworthiness in regard to, make the holds, refrigeration and cool chambers, and all other parts of the ship in which goods are carried, fit and safe for their reception, carriage and preservation.

From the definition it is clear that the ship must be fit to the intended voyage to withstand the perils of the sea.

When the consignee receive the cargo in damaged condition it is the responsibility of the carrier to show that it is not responsible for the damage and loss. The shipowner has to prove that he was due diligent in providing a seaworthy ship, and the damage or loss was due to one or more of the exemption provided in the Hague/Hague Visby Rules Article IV.2.

Failure on the part of the ship owner to prove due diligence will make him liable for the damage and loss to the cargo. In this case the time of the voyage was in winter and it was windy before the ship left port, as mentioned in the scenario that the seaman was a competent member of the crew, as a competent seaman he carried his duty in checking the ballast tank, yet he was not due diligent when it came to screwing the ballast pipe lid, for the reason that he has to finish the procedure before the ship proceeds to sea. This part is more mismanagement of the ship rather than due diligent from the ship owner.

Now we have to distinguish between two main issues when it comes to the ships crew, first issue is that if the crew were in competence, in this case there is no argument that the ship was unseaworthiness. Second issue is when the crew were competent crew and have the skills to carry their job but there was negligent on carrying their duty, in this case they were ignorant, that doesn’t make the ship unseaworthy.

For example in the muncaster castle case the judge stated “There is nothing, in my opinion, Extravagant in saying that this is an inescapable personal obligation. The carrier cannot claim to have shed his obligation to exercise due diligence to make his ship seaworthy by selecting a firm of competent ship-repairers to make his ship seaworthy. Their failure to use due diligence to do so is his failure”. The Muncaster Castle, [1961] 1 Lloyd’s Rep 57,