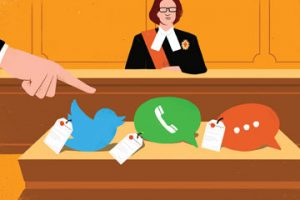 Even though modern social media platforms haven’t been around for multiple decades like the internet, the growing use and dependency on them mean that there is already an incredible amount of content housed within them. The average person might not think about it, but a legal professional needing to document comments or even photo albums as evidence for a case might be overwhelmed by the sheer magnitude of the social realm.

Social media outlets have become a commonplace center for people to share their pictures, experiences, and video clips. As the internet plays a more integral role in everyday life, some reminders of weekend parties or social get-togethers find their way onto major social media sites. While the result can be the scolding words of a family member or employer for some, others may find evidentiary support against them for a DUI charge. Sites like Facebook, Twitter, and personal blogs can all provide visual and textual evidence that put a person at a party and illustrate whether or not that person had been drinking.

Social media evidence has been used in a few cases already, namely causing the accused to admit guilt given the overwhelming evidence against them. As opposed to breathalyzer tests, it can be extremely difficult to fight a picture or video that clearly indicates intoxication, especially if the person in question is identified to be drinking heavily. In addition, status updates, tweets, or quick blog posts that follow easily determined signs of intoxication, such as unusual spelling or grammar mistakes, may be used to reinforce other pieces of evidence.

Perhaps one of the most problematic aspects of social media evidence is that anything posted that shows other people at the event can give prosecutors a record of possible witnesses. Knowing who was at the party, what they saw, and when they saw it can give prosecutors a clear understanding of a time scale. This can refute claims that the driver sobered up between their drinking and driving if applied properly.

Typically, we see social media evidence in relation to cases involving copyright, trademark and patent infringement, personal injury, employment and family law. But really, any legal professional should be aware of basic guidelines as it’s most likely to come up in the future.

There are a number of social platforms that exist online. However, there are some popular ones that would be a great place to start your social media investigation.

Now, evidence can be found in many places on these social platforms. Comments, replies, and even videos and photo albums that people post can be used as admissible online evidence. Professional webpage capture tools make it simple to archive tweets or other social posts, print pictures and capture an entire scrolling screen of a social profile.

As soon as you find data to collect, you’ll want to capture it and store it in a secure place. Building a personal webpage archive with an organized naming convention is a best practice to follow.

But, ensuring admissible social media evidence is another thing you want to make sure you get right. Here are a few things to take into consideration:

By remembering these few tips, you’ll lessen the risk of your social media evidence being questioned or thrown out.

However, in some cases, a piece of evidence may not be allowed in the court, or may be considered too easily manipulated or dismissible to be accepted. To learn more about what evidence is permissible in a court of law, contact a DUI attorney today.

Luckily, our team has done their share of capturing social media platforms for clients and can help the ones doing it themselves with a few guidelines.