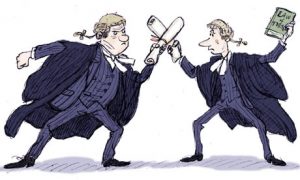 In the United Kingdom and Ireland, the legal profession is split between solicitors and barristers, and a lawyer will usually only hold one title, However in Canada, New Zealand and some Australian states, the legal profession is now merged allowing lawyers to hold the title of “barrister and solicitor” and to practice as both, even though they officially retain the distinction. Radical modifications have sometimes been proposed for example lifting the distinction between barristers and solicitors, but they have never put into practice.

Solicitors in England and Wales are represented by, and therefore pay their practicing fees to the Law Society of England and Wales. To become a solicitor a law graduate must first take the Legal Practice Course, after having completed the course they will have to get a two year training contract with a fully qualified solicitor.

Barristers will have to join one of the Inns of Court and take the Bar Vocational Course; this is followed by a pupillage with a senior barrister in a barrister’s chambers for a year. 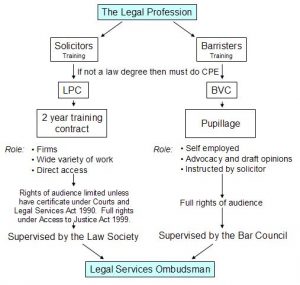 Historically, the superior courts were based in London and in order to dispense justice throughout the country, a judge and court would travel a regional circuit to deal with cases that had arisen there.

From this a body of lawyers emerged that were on socially familiar terms with the judges, had training and experience in the superior courts, and had access to a huge amount of research material and developed knowledge on the interpretation and application of the law. Some would go “on circuit” with the court to act on behalf of those requiring representation. By contrast, solicitors were essentially local to one place, whether London or a provincial town.

Lawyers who practiced in the courts in this way came to be called “barristers” because they were “called to the Bar”. They became specialists either in appearing in court, or in the process of using the courts by giving oral or written advice on the strength of a case and the best way to conduct it.

Although the training of barristers and solicitors are similar, their roles are not quite as similar. A solicitor will charge by the hour and most of their work is office based, although some solicitors enjoy litigation and will happily represent their clients in the lower courts. They will operate from an office and are not required to employ staff although they do employ secretaries. They will discuss fees with clients and chase them up personally.

A barrister normally receives a brief fee and spends most of their time either preparing to go to court on behalf of clients or being in court arguing cases. While some barristers will engage in a great deal of paperwork, especially when asked by a solicitor to provide an opinion on the merits of a case, most barristers operate outside their set of chambers. They must be a member of a set of chambers and along with the other members employs a clerk, whose task is to negotiate and collect fees. They never discuss these themselves as they are not supposed to see clients at their chambers without the instructing solicitor being present. 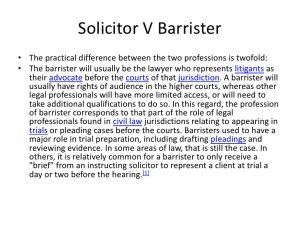 In England and Wales, the strict separation of solicitor and barrister has been partially broken down , the most obvious difference between the two professions was that, firstly, only barristers had exclusive and wide rights of audience in all courts in England and Wales, and secondly, only solicitors could be directly engaged for payment by clients.

On the other hand, Barristers traditionally carry out the functions of advocacy and hold rights of the audience in the court, but as solicitors are not advocates they need to take a separate course to become advocates, they have limited rights in the court, they are controlled by the Solicitors Act and barristers are controlled by their Inns of Court.

The public may now hire and interact with a barrister directly in certain cases without having to consult a solicitor first and barristers who have completed the Bar Council’s “Public Access” course may take instructions directly from members of the public; although there are some limitations on the work that they can do, for example, such barristers cannot take control of the conduct of litigation neither can they act in matrimonial matters. While the independent bar still exists in a largely unchanged state, a few firms of solicitors now employ their own barristers and solicitor advocates to do some court work. Barristers can now be directly instructed by certain organizations such as trade unions, accountants, and similar groups.

If a solicitor is negligent the client may have an action against him in tort for damages. In Rhondel v Worsley (1969) it was said that a barrister cannot sue for negligence whilst acting as an advocate, this has been overruled by Hall v Simons (July 2000). Now barristers can be sued for negligence by their clients at any time

Another difference between the two is that a unless a barrister goes in-house, they are self-employed, and practice out of a set of chambers, they do not get company benefits and are responsible for their own paperwork as VAT, income tax, expenses and rent in chambers. On the other hand, solicitors enter into partnerships; they work together in teams, in structured departments, with individual practitioners often looking at one small part of a large, high profile deal. A barrister is a specialist, like a surgeon, and a solicitor is a generalist, more like a family doctor

A barrister will often but not always deal with a case all the way through, because a barrister is usually briefed by a solicitor each time a specific piece of work needs to be done there might be different barristers dealing with a case, although the solicitor will remain responsible the whole way through. This is because solicitors are retained by their clients and are responsible for dealing with what comes up as it comes up, but a barrister cannot always be available for a client to attend a particular hearing because they may not be available then. If a barrister has been previously booked to do something else for another client on the date in question she will have to honour that commitment. This called the ‘cab rank rule’ and it is what helps keep barristers independent by preventing them from picking and choosing the cases they want to do unfairly.

Although these differences have been changed, the style of the distinction has hardly changed in practice. Solicitors can only appear as advocates in the lower courts although the work continues to be handled by them. However solicitors with advocacy experience are entitled to acquire higher “rights of audience allowing them to appear in the superior courts, but very few solicitors do as most continue to take on a barrister. Not only is this division traditional but in higher value civil or more serious criminal cases, it is often crucial for a barrister to take on the case as they are specially trained and experienced in doing so.

Their distinctions do continue to have relevance under the modern legal system although barristers and solicitors are considered to be relatively the same profession, they have very different jobs. Their every-day lives differ from each other as they both handle separate issues. A solicitor specialises in an area and then must pass on their case to the barrister who then will argue in court. Barristers need solicitors for their work and solicitors need barristers to continue their work for them. They are a partnership. In conclusion, they are different careers within the same profession. They handle different issues and provide different services to their clients but ultimately, support each other in their line of work.