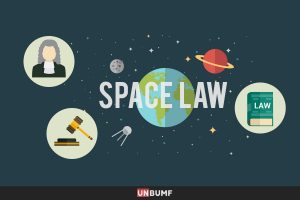 The origins of space law date back to 1919, with international law recognizing each country’s sovereignty over the airspace directly above their territory, later reinforced at the Chicago Convention in 1944. The onset of domestic space programs during the Cold War propelled the official creation of international space policy (i.e. the International Geophysical Year) initiated by the International Council of Scientific Unions. The Soviet Union’s 1957 launch of the world’s first artificial satellite, Sputnik 1, directly spurred the United States Congress to pass the Space Act, thus creating the National Aeronautics and Space Administration (NASA). Because space exploration required crossing transnational boundaries, it was during this era where space law became a field independent from traditional aerospace law.

Since the Cold War, the Treaty on Principles Governing the Activities of States in the Exploration and Use of Outer Space, including the Moon and Other Celestial Bodies (the “Outer Space Treaty”) and the International Telecommunications Union have served as the foundational legal framework and set of principles and procedures constituting space law. Further, the United Nations Committee on Peaceful Uses of Outer Space, along with its The Office for Outer Space Affairs subcommittee, aid in governing international space law and policy. Challenges that space law will continue to face in the future are fourfold—spanning across dimensions of domestic compliance, international cooperation, ethics, and the advent of scientific innovations. Furthermore, specific guidelines on the definition of airspace have yet to be universally determined.

Space Law refers to the set of regulations, international agreements and domestic rules which apply to government and commercial operations in outer space. As man has pursued exploration of this planet, the law has followed these adventures, crossing borders and oceans and landing on new shores. The English set out on the oceans and transplanted their legal system across the globe to all of their colonies. Gradually domestic and international law has extended its reach to every part of our globe, the atmosphere, the oceans and ocean bed, our land masses and the natural resources, the Arctic and the Antarctic. Now we are looking towards the heavens.

The era of space-exploration is here. With massive asteroids and comets making their way past us at such a small distances that it raises a collective sweat across humanity every time; our society is thinking of ways to both mitigate risks and utilize resources.

Currently the rules governing real estate in outer space, commercial operations and traffic control are held in a body of soft law. In other words, the body of international treaties and agreements, combined with national laws are flexible in the sense that they are yet untested. On earth, we have centuries of case law to guide us into more predictable legal outcomes. The current rules state that there is no ownership of property in space as all of the galaxy besides earth are what is termed ‘global commons’, similar to the way that the international areas of the ocean, airspace and the Antarctic.

Private companies may make a bid to test the rules by claiming ownership and title over valuable resources in space and without firm binding international agreements to the contrary, may be able to side-step the rules.

Put simply Space Law covers a body of non-compulsory international rules and agreements which govern every aspect of transport, research, weapons and resource utilization (mining) in space operations. Every country of course has its own domestic rules governing operations in space. What would happen if a private company travelled to an asteroid rich in valuable resources planted their flag and claimed ownership? Would this stimulate a no-holds barred, space-age gold rush and turn outer space into the wild, wild, west?

Space Age Education occurs every day at the International Space University, a non-profit research organization. Students examine questions like this in order to provide valuable feedback and research for space industry organizations across the globe. To find out more about how space laws govern our global space operations like launches, human spaceflight and the international space station.