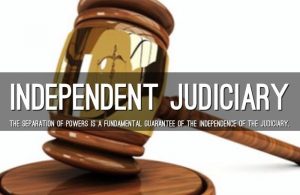 Different countries deal with the idea of judicial independence through different means of judicial selection, or choosing judges. One way to promote judicial independence is by granting life tenure or long tenure for judges, which ideally frees them to decide cases and make rulings according to the rule of law and judicial discretion, even if those decisions are politically unpopular or opposed by powerful interests. This concept can be traced back to 18th-century England.

In some countries, the ability of the judiciary to check the legislature is enhanced by the power of judicial review. This power can be used, for example, by mandating certain action when the judiciary perceives that a branch of government is refusing to perform a constitutional duty or by declaring laws passed by the legislature unconstitutional.

Independence of the judiciary (also judicial independence) is the principle that the judiciary should be politically insulated from the legislative and the executive power. That is, courts should not be subject to improper influence from the other branches of government, or from private or partisan interests. 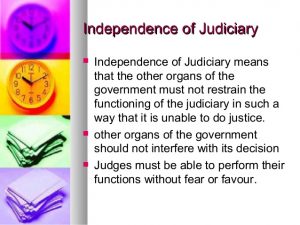 Different nations deal with the idea of judicial independence through different means of judicial selection, or choosing judges. One way to promote judicial independence is by granting life tenure or long tenure for judges, which ideally frees them to decide cases and make rulings according to the rule of law and judicial discretion, even if those decisions are politically unpopular or opposed by powerful interests. But they may have conflicts with republicanism and they could support it.

In some countries, the ability of the judiciary to check the legislature is enhanced by the power of judicial review. This power can be used, for example, when the judiciary perceives that legislators are jeopardizing constitutional rights such as the rights of the accused. Constitutional economics studies such issues as the proper national wealth distribution including the government spending on the judiciary, which in many transitional and developing countries is completely controlled by the executive. The latter undermines the principle of powers’ “checks and balances”, as it creates a critical financial dependence of the judiciary. It is important to distinguish between the two methods of corruption of the judiciary: the state (through budget planning and various privileges – being the most dangerous), and the private. The state corruption of the judiciary makes it almost impossible for any business to optimally facilitate the growth and development of national market economy.

Canada has a level of judicial independence entrenched in its Constitution, awarding superior court justices various guarantees to independence under sections 96 to 100 of the Constitution Act, 1867. These include rights to tenure (although the Constitution has since been amended to introduce mandatory retirement at age 75) and the right to a salary determined by the Parliament of Canada (as opposed to the executive). In 1982 a measure of judicial independence was extended to inferior courts specializing in criminal law (but not civil law) by section 11 of the Canadian Charter of Rights and Freedoms, although in the 1986 case Valente v. The Queen it was found these rights are limited. They do, however, involve tenure, financial security and some administrative control. 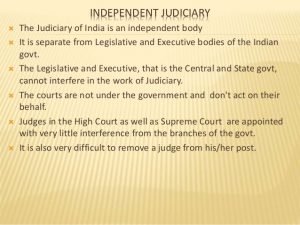 In the United Kingdom and its predecessor states, judicial independence emerged slowly in the United Kingdom. Under the Norman monarchy of the Kingdom of England, the king and his Curia Regis held judicial power. Later, however, more courts were created and a judicial profession grew. In the fifteenth century, the king’s role in this feature of government thus became small.[4] Nevertheless, kings could still influence courts and dismiss judges. The Stuart dynasty used this power frequently in order to overpower Parliament. After the Stuarts were removed in the Glorious Revolution of 1688, some advocated guarding against royal manipulation of the judiciary. King William III finally approved the Act of Settlement 1701, which established tenure for judges unless Parliament removed them. 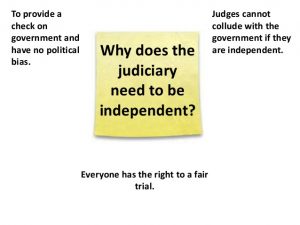 Under the unwritten British Constitution, there are two important conventions which help to preserve judicial independence. The first is that Parliament does not comment on the cases which are before the court. The second is the principle of parliamentary privilege: That Members of Parliament are protected from prosecution in certain circumstances by the courts.

The pay of judges is determined by an independent pay review body. It will make recommendations to the government having taken evidence from a variety of sources. The government accepts these recommendations and will traditionally implement them fully. As long as judges hold their positions in “good order,” they remain in post until they wish to retire or until they reach the mandatory retirement age of 70.

As of March 2008, the legal profession is self-regulating; it is responsible for implementing and enforcing its own professional standards and disciplining its own members. In this case, the bodies are the Bar Council and the Law Society. However, this self-regulation will come to an end when those bodies themselves come under the regulation of the Legal Standards Board, composed of non-lawyers, under the Legal Services Act 2007.

Article III of the United States Constitution establishes the federal courts as part of the federal government.

The Constitution provides that federal judges, including judges of the Supreme Court of the United States, are appointed by the President “by and with the advice and consent of the Senate.” Once appointed, federal judges:

…both of the supreme and inferior Courts, shall hold their Offices during good Behavior, and shall, at stated Times, receive for their Services a Compensation which shall not be diminished during their Continuance in Office.

Federal judges vacate office only upon death, resignation, or impeachment and removal from office by Congress; only 13 federal judges have ever been impeached.

The President is free to appoint any person to the federal bench, yet typically he consults with the American Bar Association, whose Standing Committee on the Federal Judiciary rates each nominee “Well Qualified,” “Qualified” or “Not Qualified.”

State courts deal with independence of the judiciary in many ways, and several forms of judicial selection are used for both trial courts and appellate courts (including state supreme courts), varying between states and sometimes within states. In some states, judges are elected (sometime on a partisan ballot, other times on a nonpartisan one), while in others they are appointed by the governor or state legislature.