Home » Law and Ethics » THE RULES OF STATUTORY INTERPRETATION

There are four Rules of Statutory Interpretation, these are the literal rule, the golden rule, the mischiefrule and the purposive approach. … The literal rulerequires courts to interpret statutes in their plain, literal and ordinary sense. The courts will not examine the intention of Parliament. 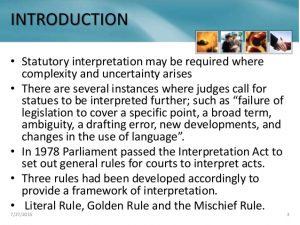 The rules of statutory interpretation] are rather crude labels for describing a complex mechanism, i.e. making sense of what someone else has written. The labels are still in common use, but they are dangerous. For a start, they use the word ‘rule’, and this gives the impression that if you follow a particular pattern you will not go wrong.”

Laws are created by Parliament; Judges interpret the laws using Statutory Interpretation. Draftsmen, when drawing up statutes endeavour to ensure they are clear and unambiguous; however, statutes can contain wording with uncertain meanings and with society’s progression, old statutes, though still applicable, may contain wording unused in present day. There may be other errors unnoticed by Parliament and statutes cannot cover every eventuality therefore; judges are required to interpret the meanings of statutes using the Rules of Statutory Interpretation. There are four Rules of Statutory Interpretation, these are the literal rule, the golden rule, the mischief rule and the purposive approach. These rules will be discussed within the body of this essay. The essay will then move on to consider the three rules of language and the aids used alongside the rules in order to reach a conclusion to the writer’s position on the views expressed in the above quotation. 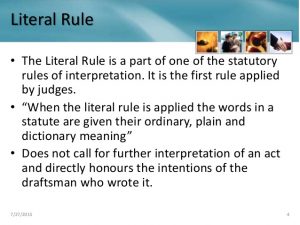 The literal rule requires courts to interpret statutes in their plain, literal and ordinary sense. The courts will not examine the intention of Parliament. This rule is used frequently as judges are not authorised to make laws and by following the statute to the letter judges cannot be accused of making law.

This rule has positives, it does not question Parliament therefore upholds the law made even where it seems illogical, thus preserving the separation of powers. In limiting the role of the judge; verdicts are based on facts not opinion or prejudice. On the negative side, it creates loopholes where discrepancies in interpretation of the literal meaning occur, as it is ineffective in identifying limitations and complexities in English language. Occasionally use of this rule has defeated the original intention of parliament; an example would be Whiteley v. Chappell (1868). The use of this rule can lead to injustice, weaken society’s confidence in the law and create precedents which require correction by Parliament.

The Golden Rule, used where the literal rule would result in an absurdity or an obnoxious result. The court investigates whether the statute wording conveys Parliament’s intention. See Sigsworth [1935] Ch 89 a son murdered his mother, she had not made a Will and her son stood to inherit her entire estate from her death. The statute was clear however, the son stood to benefit from his crime which would be unjust. The positives are that judgments are usually parallel with the legislator and errors in drafting are amended before awkward precedents are set, thus closing loopholes. Using common sense within law usually provides justice restoring public confidence in the legal system. It is problematic though as judges have power to interpret the statute as they wish, changing or adding to its meaning. It flouts the separation of powers and judges cannot be influenced by injustice without the presence of absurdity.

The Mischief rule, used to interpret gaps (ultra vires) Parliament intended to cover and apply a ruling that remedies the problem in ambiguous statutes. This rule is illustrated in Corkery V Carpenter [1951] 1 KB 102. The defendant rode a bicycle under the influence of alcohol. Under s12 of the Licensing Act 1872 it was offence to be drunk in charge of a carriage. The defendant was charged as the intention of the Act was to prevent persons being in charge of transportation on a public highway whilst intoxicated. This rule allows for the adaption of statutes in a progressive society and closes loopholes. However, the judges have a law-making role infringing on the separation of powers and giving opportunity for a crime to be created after the event. Judges could make decisions based on their own opinions which could lead to injustice.

The purposive approach is implemented to ensure the law is effective as Parliament would have intended. This is used when interpreting EU Law see Pickstone v Freemans plc [1989] AC 66. EU Law overrides all sources of domestic law, had the literal rule been applied in this case the UK would have breached its treaty obligations to give effect to an EU directive (Slapper, G, p186, 2009).

In statutory interpretation courts rely on presumption, language, intrinsic and extrinsic aids. Presumptions are that common law has not been amended unless the Act shows intention to; Parliament cannot have retrospectively amended the law. In criminal cases Mens rea is necessary.

The rules of language are Ejusdem Generis, a list of words is followed by general words, which are limited to the same type of item as the specific words see Powell V Kempton Park Racecourse [1899] AC 143. Secondly Expressio unius exclusio alterius the express mention of one thing excludes others; the Act applies only to items in the list see R v Inhabitants of Sedgley (1831) 2 B & Ad 65. Finally Noscitur a sociis, a word is known by the company it keeps and must be looked at in the context of the Act see Muir v Keay (1875) LR 10 QB 594. Intrinsic aids are matters within an act itself which may make the meaning clearer. Finally extrinsic aids put an Act into context using case law, dictionaries from the time and historical setting.

In consideration of the above quotation it is worth noting that the Law itself is a structure based upon rules, these rules are partly built upon social and moral rules. It is reasonable for Statutory Interpretation to be labeled “Rules”. Rules are utilised in many activities from football games to the etiquette expected in a particular working environment. They are responsible for regulating and guiding a behaviour or action against which an action or behaviour may be assessed and judged. Rules set a standard. In general rules can be applied to cases without having to reassess the intrinsic worth of each case; this provides a consistent result can be both predicted and stable.

There is however the argument that as the law is expressed in language there are factors that will influence the interpretation and application of legal rules, however by having a set of rules to follow in the interpretation of the rules, it does not suggest rigidity in the result and it is possible for the result to be the “wrong” result. However, the rules of statutory interpretation are varied, it is not one set rule, and therefore the most effective rule should be applied in consideration of the case. Together the rules allow for contemplation and are the starting point to allow for the most effective action in upholding the law.