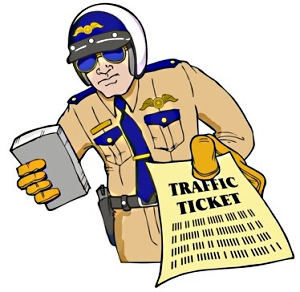 Welcome to FindLaw’s Traffic Tickets Center, which offers information and resources on traffic offenses in every state. Here, you’ll find basics about traffic tickets – from getting pulled over, to getting a ticket, to whether and how to fight a traffic ticket. Learn about your rights and find specifics on traffic tickets for violations such as speeding, running a red light, having an expired license, and distracted driving. You can also get driver’s license information, find DMV offices, learn about vehicle rules, and more.

Most traffic tickets are issued for minor offenses, called “infractions,” including tickets for mechanical violations and most non-dangerous moving violations. However, certain traffic-related offenses are categorized as “misdemeanors” or even “felonies.” Generally speaking, an infraction is an offense for which punishment does not include prison. Misdemeanors are crimes potentially punishable by less than a year in prison. Felonies are more serious crimes, potentially punishable by more than a year in prison.

A traffic violation may be a misdemeanor or felony if it causes or creates a real threat of injury to a person or destruction of property. Offenses that do not include the element of danger but are often a misdemeanor or felony regardless include driving with a revoked license or without insurance, leaving the scene of an accident, driving under the influence of drugs or alcohol, and some kinds of reckless driving. Felony traffic offences include repeated DUI/DWI convictions, certain hit-and-run offenses, and vehicular homicide.

Successfully fighting a ticket may involve simply showing up for your court date, since if the police officer fails to appear there is no one to accuse you. However, officers are often happy to appear since they are paid for their time and some other defense strategy may be needed.

To successfully fight a ticket you may dispute the officer’s opinion or evidence. Diagrams, photographs, and eyewitness statements that contradict the officer’s opinions or the facts they presented may introduce enough doubt to prevent an adverse decision. In some cases a mistake of fact can relieve you of some legal responsibility; if a no-turn sign was obscured or fell down you would not be responsible for making the illegal turn.