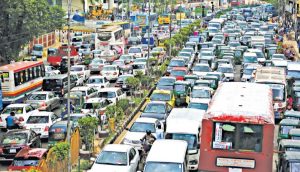 The transport sector of Bangladesh consists of a variety of modes. The country being a flat plain, all three modes of surface transport, i.e. road, railway and water are widely used in carrying both passengers and cargo.

Transport is an important part of Bangladesh’s economy. Since the liberation of the country, the development of infrastructure has progressed rapidly and a number of land, water and air transport modes exist. However, significant progress must be made to ensure uniform access to all available transport. Unlike other nations, Bangladesh has four ministries responsible for transportation in the country:

Types of Vehicles operating in the City and its Growth

The metropolitan area of the city has several precincts – old city, newly developed areas, developing areas, satellite towns etc. with their own characteristics including social and cultural tradition and income disparity. These lead to a variation of demand (or transport services and subsequently prolife rate different types of vehicles. The bottom income group mostly depends on the low cost transportation including non-motorized vehicles.

The development of mass transit was limited to bus operation, which has failed to cope with the rapidly increasing demand for transportation in the metropolis. The government own public transport (bus operation) deteriorated steadily both in quality and quantity since its formation in the pre-independence era because of management and maintenance problems. The private sector bus operators also were unable to provide required public transport facilities due to fragmentation of ownership, lack of coordinated control, poor maintenance, traffic congestion, and excessive overcrowding etc. causing undue wear and tear and premature failure.

In order to meet growing transport demand of the middle-income and low-income group of the metropolis, both motorized and non-motorized Para transit as an inevitable alternative proliferated in the city. Auto-rickshaw, two-stroke three-wheeler, with seating capacity of 3 passengers rapidly expanded in 1980s and Tempo with 8-10 seating capacity came into operation in  the latter half of the decade. In the first half of 1990s, Tempo mode expanded rapidly at the rate of more than 100 percent per annum and the expansion of the three-wheeler Auto-rickshaw operation become slower. With further growth of population including floating population and sprawling of the city with increased commercial activities and growth of secondary and tertiary industries, the demand for transport was accelerating at a very high rate while the public transport system (bus operation) could hardly be developed. In this context, Para-transit penetrated deeply and quickly in the public transport system. A convoy of small passenger vehicles, four-stroke four-wheeler, with passenger capacity ranging from 10 to 15 started coming in operation from the beginning of the last decade.

The economically well off city dwellers have their own vehicles including car, jeep, station wagon, microbus as means of their transportation. It is revealed from the transport registration department that on an average about 5000 cars and 1600 microbuses per annum are entering into city. There is a declining trend of registration of Auto-rickshaw and Tempo in the metropolis due to discouraging policy of the government.

There has been a dramatic expansion of road network all over the country in recent years. In 1947 there were only 461.8 kilometers of metal led roads. In 1997, the total length of paved road under the Roads and Highways Department stood at more than 20,000 kilometers. The road transport carries about 70% of the country’s total passenger and cargo. Bangladesh is a reverie country. So in past days, main transportation was through water. But in recent years, Construction of a number of important bridges over the mighty rivers such as the Bangabandhu Jamuna Bridge, Meghna Bridge. Meghna-Gumti Bridge, Bangladesh-China Friendship Bridge, Shambhuganj Bridge and Mahananda Bridge have been completed. The 4.8 km long Bangabandhu Bridge is the eleventh longest in the world over the Jamuna River. It has established a strategic link between the East and the West of Bangladesh. Especially north Bengal is now strongly connected with the main stream of the country. It is faci1itating transmission of electricity, natural gas and the telecommunication links. The Rates of Road transport in Bangladesh is one of the cheapest in the world. The Bangladesh Road Transport Corporation (BRTC) also maintains a countrywide network of bus services, Dhaka – Calcutta – Dhaka direct daily bus services via Benapole, Jessore.

Bangladesh Railway, a principle transportation agency of the country, is a Government –owned and Government –managed organization. It covers a length of 2,855 route kilometers employing a total of 34,168 regular employees. As railway is a very important mode of inland transport, linking the entire length and breadth of the country, its healthy grow naturally contributes to the economic development of the country.

About two-thirds of Bangladesh has a dense network of rivers, canals and creeks. Water transport is the only way in nearly 10% of the country. The waterways vary from 8372 kilometer during the monsoon to 5200 kilometer during the dry season. State-owned BIWTC provide passenger and cargo services in waterways within the main land and coastal areas of the country. There are two major sea ports in Bangladesh. Chittagong, the oldest port( at least 1000 years) and The Mongla port in Khulna region. The country has also communication between the mainland and islands by waterways. Because of Bangladesh’s many rivers, ferries are a major form of transportation.These ferries carries people and cargo. Many types of traditional country made boats are also used for transportation. The landscape of Bangladesh is dominated by about 250 rivers and so these carry passengers and merchandise on a large scale. Journey by Steamer from Dhaka (Sadarghat) to Khulna Sundarbans will be a rocky experience.

In Dhaka and Chittagong motorised transportation has increased tremendously over the last 10 years, and traffic jams in Central Dhaka are a nightmare. The problem continues to be due more to rickshaws than cars, and Dhaka has to be the only place on the planet where you can get caught up in a snarling hour-long traffic jam consisting entirely of rainbow-coloured bicycles and cycle-rickshaws.

What freaks out new arrivals the most is the total chaos that seems to pervade the streets, with drivers doing anything they please and pedestrians being the least of anybody’s worries. Accidents do happen and sometimes people are killed, but the odds of your being involved are still fairly slim.

Where possible it can be wise to negotiate fares beforehand to avoid hassles at the other end, though you will be surprised at how often people don’t overcharge you on principle. If you are hassled, a good strategy is to keep the discussion going long enough for a crowd to form, which won’t be long. This crowd of strangers is something of a people’s court, and more often than not is an impressively fair adjudicator. Once deliberations are over and the court has handed down its verdict, the honorable thing for both parties to do is graciously acquiesce.

In Bangladesh three-wheeled auto-rickshaws are called baby taxis. As with the rickshaw-wallahs, baby-taxi drivers almost never own their vehicles. They’re owned by powerful fleet-owners called mohajons, who rent them out on an eight-hour basis. Also like rickshaws, they’re designed to take two or three people, but entire families can and do fit.

In Dhaka and Chittagong baby taxis are everywhere – most people use these instead of regular taxis. Faster and more comfortable than rickshaws on most trips, baby taxis cost about twice as much. You’ll also find them at Dhaka and Chittagong airports and they charge less than half the taxi fare, but the ride into town from either airport is long and not ideal after a tiring long-haul flight. Outside of these two metropolises, baby taxis are much rarer. In towns such as Rangpur, Dinajpur and Barisal they virtually don’t exist.

This is a larger version of a baby taxi, with a cabin in the back. Tempos run set routes, like buses, and while they cost far less than baby taxis, they’re more uncomfortable because of the small space into which the dozen or so passengers are squeezed. On the other hand, they’re a lot faster than rickshaws and as cheap or cheaper. Outside Dhaka and Chittagong they’re a lot more plentiful than baby taxis – you will find them even in relatively small towns.